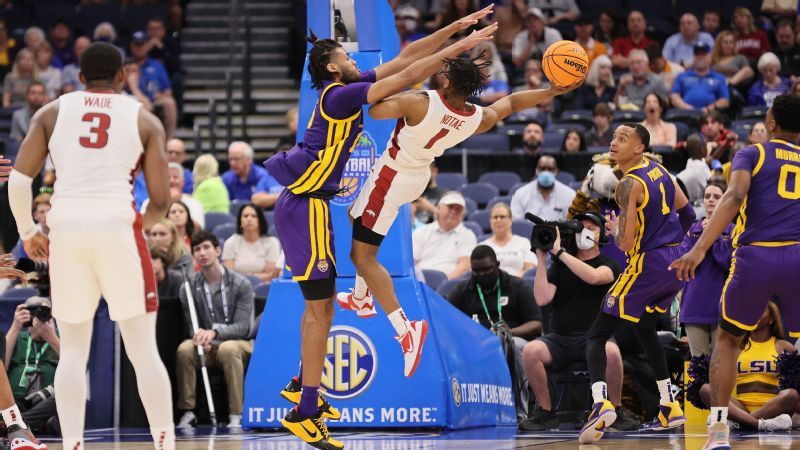 TAMPA, Fla. – The No. 15 Arkansas Razorbacks used a late six-point run to the end first half before opening the second half on a 13-point run to set the stage for a 79-67 victory over LSU in the Hogs’ first game of the SEC Tournament on Friday afternoon inside Amalie Arena.

Defense dominated the first half of the third meeting between the two teams with teams shooting under 30% for the half. LSU’s Mwani Wilkinson made a jumper with just over a minute remaining in the half to give the Tigers a three-point lead. Chris Lykes, however, took over the final minute of the half – sinking four free throws and nailing a 2-pointer at the buzzer to end the half and shift all momentum to the Razorbacks.

Arkansas used that momentum out of the half to go on a 13-point run over the first four minutes to extend the lead out to 16 before an LSU free throw finally snapped the streak. The Razorbacks’ smothering defense continued in the second half while the Hogs’ offense found rhythm, shooting 60.7% led by JD Notae’s 14 second half points.

Au’Diese Toney paced Arkansas with 22 points and 10 rebounds in his return from an injury. Toney was one of three Hogs to reach double digits with Notae adding 19 and Lykes 18 off the bench. Jaylin Williams led all players with 11 rebounds while scoring six points.

SEC Sixth Man of the Year Tamari Eason led the Tigers with 15 points but was held to just one rebound.

The victory advances the Razorbacks into tomorrow’s semifinal match-up with Texas A&M, who upset top-seeded Auburn earlier in the day. The Razorbacks and Aggies will tip off tomorrow at noon on ESPN.