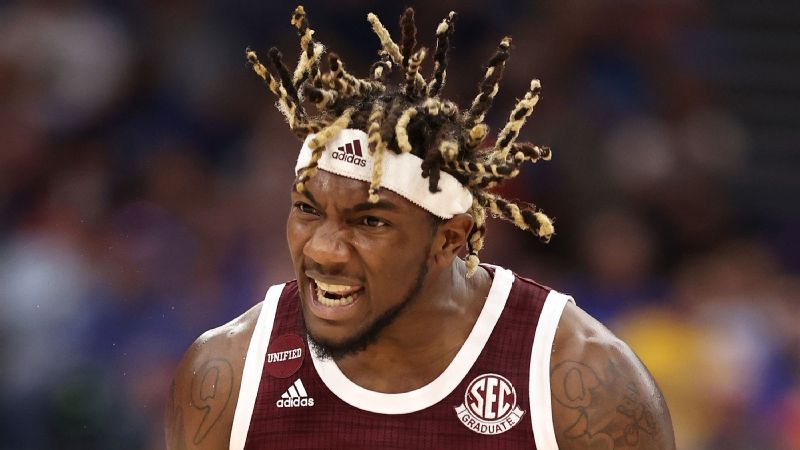 TAMPA, Fla. — Texas A&M, the No. 8 seed, continued its improbable run through the SEC Men’s Basketball Tournament with a 67-62 upset of 1-seed Auburn in the first of four quarterfinal games Friday at Amalie Arena.

Despite a furious comeback by Auburn in the latter stages, the Aggies controlled the lead for nearly the entire game. The Tigers’ last lead of the day came at 3-2 on a Jabari Smith jumper, one of just six baskets they could muster in a disastrous first half from which they never fully recovered.

Texas A&M came out of the gate hot and did not let up the entire first half, while Auburn, on the other hand, struggled to hit shots in the face of a tenacious Aggies’ defense.

Wade Taylor IV’s 3-pointer from the corner with 11 seconds left made it 37-21 in favor of the Aggies at halftime, which marked their biggest lead of the opening 20 minutes.

But it was Tyrece Radford who did the most damage for Texas A&M in the first half. He made as many threes as the entire Auburn team – three – but did it on 17 fewer shots. Radford was 3 of 3 while the Tigers, as a team, were 3 for 20 (.150) from beyond the 3-point arc in the first half.

Auburn wasn’t much better shooting from the field overall in the first half, hitting only six of 37 attempts for 16 percent.

The onslaught continued in the second half, with Radford’s rare two-point basket extending the Texas A&M lead to 53-33 with 10:52 left in the game. By then Radford had also made all four of his 3-point attempts on the day, or the same number of threes as Auburn as a team in 18 fewer shots.

And yet the Tigers, while down consderably, were not done.

They continued to battle as their own 3-point ace, Wendell Green Jr., started heating up. Shortly after Radford finally missed his first 3-point attempt of the day for the Aggies, Green Jr. hit three in a row for Auburn, cutting the Texas A&M lead to 60-55 with 1:56 left in the game.

Jabari Smith added another contested three to make it 62-58 with 36.9 seconds left, but Quenton Jackson subsequently hit two free throws for Texas A&M and Green Jr. fouled out when he was called for an offensive foul on Auburn’s next possession.

Smith led Auburn with 17 points. Walker Kessler had 16 points and eight rebounds for Auburn and Green Jr. added 15 points before fouling out.

The victory was Texas A&M’s third in as many days at the SEC Tournament, improving its record to 22-11. Auburn, the No.4-ranked team in the nation, fell to 27-5 and now will await its next matcnup in the upcoming NCAA Tournament.

Texas A&M will face the winner of the LSU-Arkansas quarterfinal in the SEC Tournament semifinals Saturday at 1 p.m. in a game that will be televised on ESPN.