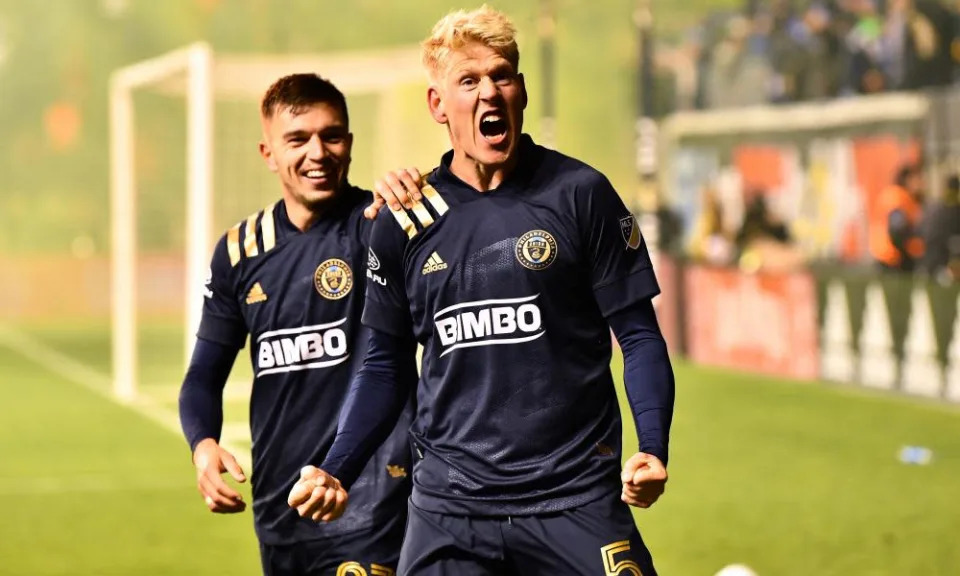 Nobody in MLS reached the level of Carles Gil in 2021. The 29-year-old was the conductor through which so much of the record-breaking New England Revolution’s play flowed. Without Gil, the Revs wouldn’t have been the regular season force they were.

German attacker Hany Mukhtar, whose 16 goals and 10 assists fired Nashville to an unexpected third-place finish in the Eastern Conference, deserves a mention, as does Minnesota United playmaker Emanuel Reynoso who dragged his team through a number of matches. But Gil, who ranked first in MLS for Expected Assists per 90 minutes, key passes, passes into the penalty area, progressive passes, through balls and goal-creating actions shone brighter than anyone.
Best goal

There is an unavoidable subjectivity to the assessment of a goal’s quality, but if social media views can be used as a sort of yardstick Jakob Glesnes’ thunderbolt for the Philadelphia Union against Atlanta United stands out as the most remarkable finish of the season. It also contained a pleasing audio element as his shot thudded off the bar and over the line.

Raul Ruidiaz’s missile for Seattle away to Austin FC also warrants a mention, as does Rubio Rubin’s perfectly executed overhead kick for RSL against San Jose.
Team of the year

While New York City lifted MLS Cup for the first time, the New England Revolution set a new standard at the top of the regular season standings, claiming the Supporters’ Shield by breaking the league’s single-season points record. Bruce Arena’s side boasted the MLS MVP in Gil, the league’s Goalkeeper of the Year in Matt Turner and a budding superstar in Tajon Buchanan, who secured a $7m move to Club Brugge in August.

The Revs played a brand of attractive, attacking soccer that was as entertaining as it was effective. Of course, New England fell at the first hurdle in the playoffs, but the postseason isn’t necessarily where the best teams make their mark, certainly not in the case of the record-breaking Supporters’ Shield winners.
Fiasco of the year

Everyone in the league knows only three Designated Players are permitted per team. Everyone besides Inter Miami, that is. The Florida franchise had already endured a difficult start to life in the league when it emerged that they essentially had five DPs on the books.

Related: Phil Neville has everything to prove after Inter Miami’s rough season

This fiasco resulted in MLS meting out a league-record penalty of $2m with a $250,000 fine issued to Inter Miami managing owner Jorge Mas (the league found no wrongdoing on the part of another of the team’s other part-owner, David Beckham). Sporting director Paul McDonough was suspended until the end of 2022 with Inter Miami’s allocation money for playing signings in 2022 and 2023 significantly reduced. It was an episode that could take the club a long time to recover from.
Coach of the year

But the winner of this year’s award is a familiar name. After the debacle of the USMNT’s unsuccessful qualification campaign for the 2018 World Cup, many believed Bruce Arena to be yesterday’s man. However, the 70-year-old has enjoyed a renaissance since taking over at the New England Revolution, with his achievements this season ranking among his very best in MLS.
Story of the year

The fairytale of Real Salt Lake’s postseason ended in the Western Conference final, where they suffered a comprehensive defeat to the Portland Timbers, but nonetheless, it was a captivating run that demonstrated how predicting the playoffs is close to impossible.

First, Mastroeni’s side squeezed into the playoffs with a stoppage time winner against Sporting KC on Decision Day. Then they beat Western Conference heavyweights Seattle Sounders on their patch without having a single shot on goal before their penalty shootout victory. Next up they mounted a comeback from 1-0 down against Sporting KC with 18 minutes left to play. For three weeks, Real Salt Lake, who replaced their manager midway through year and are still without a new owner, were the talk of the league.
Transfer of the year

Until Ryan Gauld’s arrival at BC Place in late July, the Vancouver Whitecaps had drifted through the 2021 MLS season. With the Scottish playmaker in their team, though, the Canadians found their groove, losing just two of the 19 regular season games played after his signing as a free agent from Farense in Portugal. Four goals and five assists in 19 games (14 starts) illustrated the immediate impact he made.

Brian White also played a significant role in turning around the Caps’ campaign, arriving from the New York Red Bulls in the summer, but Gauld caught the eye more than any other new signing in the league in 2021. Vancouver fans surely can’t wait to see what the Scot, nicknamed ‘Mini Messi’ earlier in his career, does in a full season.