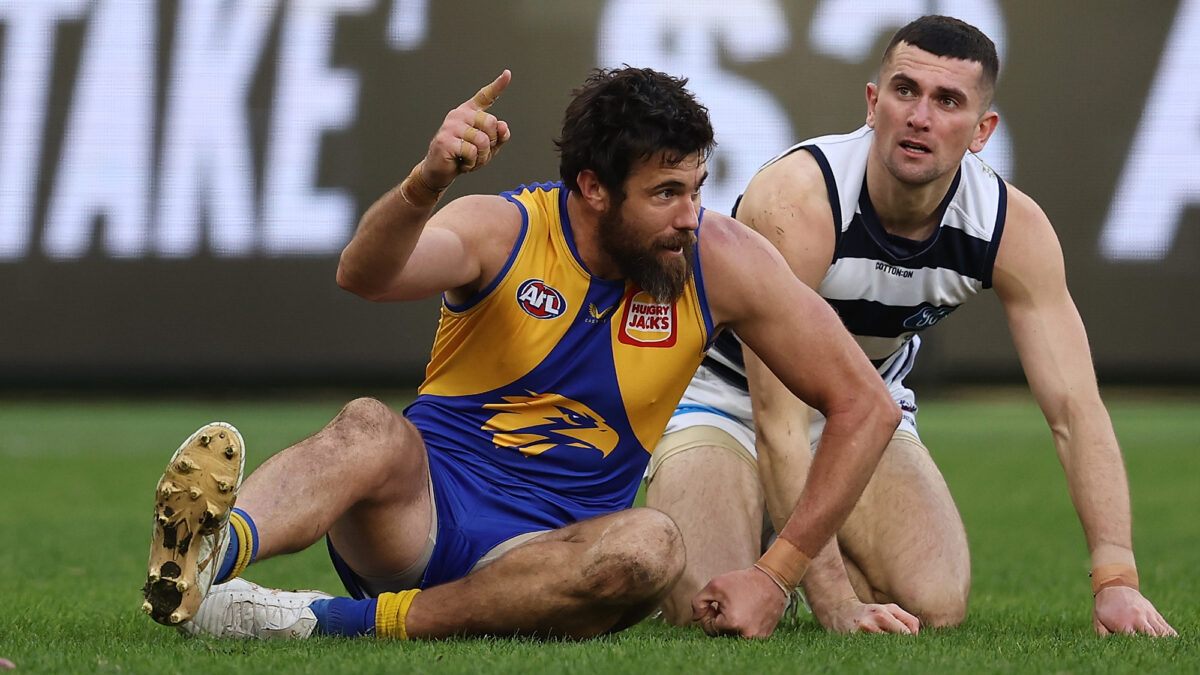 West Coast didn’t defeat Geelong on Saturday afternoon – that would have been ridiculous. Things don’t tend to change for teams that quickly.

But showing an energy, spirit and flair not just completely at odds with their efforts this season, but many of those from the second half of 2021 as well, the Eagles showed that their period at rock bottom will be fleeting.

More premierships, and indeed finals appearances, are still probably some way off; but if ever an 18-point defeat was a huge step in the right direction, it was this one. There’s still a nucleus of a very good side lying within these Eagles, and for the first time this year, they showed it.

Geelong, meanwhile, are the uber-professionals. They were spooked early by the Eagles’ pressure, ferocity at the contest, and speed of ball movement – all traits that saw St Kilda and Sydney both torn to shreds by objectively lesser opponents in Essendon and Port Adelaide early this week.

But the Cats wouldn’t be so easily cowed; dominating possession and territory after half time and calm and composed in defence, three goals to nil in the first half of the third term effectively weathered the storm. The Eagles fought on gamely, and may have been in better shape to hold the Cats in check if they hadn’t yet again lost Jeremy McGovern to a mid-match injury, but they never again threatened a memorable upset.

West Coast’s improved performance, as you’d expect, largely stemmed from the midfield, where the return of Dom Sheed and Elliot Yeo provided an instant spark. Only North Melbourne have had a worse disposal differential than the Eagles this season, so being able to match the Cats for ball, finishing with 328 disposals to 345, made the world of difference. When Tim Kelly returns from illness, that will improve further as well.

Sheed finished with 20 touches, and was particularly impactful with 16 in the first half before, understandably, tiring thereafter. His ball use wasn’t always perfect – especially when he was knackered late – but with matches under his belt all that will get better.

For starters, though, his positioning at the contest and knowledge to not get sucked into the coalface but maintain his distance, a trait that the younger Eagles thrust into the midfield in his absence this year have paid a heavy price for, instantly made defending clearances a far easier task.

The role for Yeo was fascinating; he spent plenty of time at half-back, and when on the ball wasn’t the battering ram he had been at his peak in 2018 and 2019. He only had two contested possessions, with Jack Redden and Luke Shuey doing much of the heavy lifting; but for the first time in a long team, he looked to cover the ground uninhibited, gaining 563 metres for the day – more than anyone else on the ground – with penetrating kicking.

Geelong’s strength hasn’t always been at the contest this year, but it was still noteworthy that the Eagles, the worst clearance side for the year, matched them in that stat until the final quarter, with 29 to 38 for the match. Central to that was Redden with seven, plus 15 contested possessions; he excelled when able to focus on just one aspect to his game rather than needing to be the be all and end all in that midfield group.

For all of that, though, the Eagles still needed a brilliantly efficient forward line to make the most of limited supply – they entered the attacking 50 just 40 times for the match, and only 24 by three quarter time; low even by their competition-worst standards.

But by three-quarter time, they’d managed four goals, half their tally, from stoppages, comfortably more than the Cats. Equally, the Eagles’ forward line is famously one of the most effective in the game as a rule – that’s how they beat Collingwood earlier this year, for instance – and with a combination of elite set shot kicking and experienced positioning from the likes of Josh Kennedy and Jack Darling, they’ve been masters of turning coal into diamonds for years. 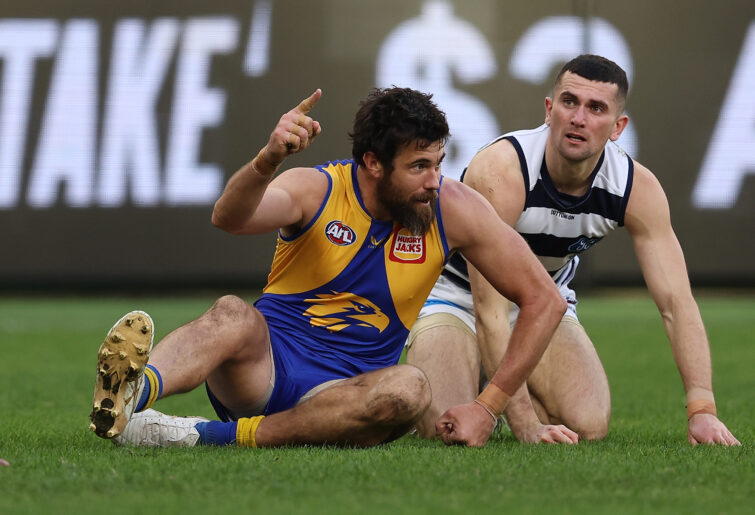 PERTH, AUSTRALIA – JUNE 18: Josh J. Kennedy of the Eagles celebrates a goal during the round 14 AFL match between the West Coast Eagles and the Geelong Cats at Optus Stadium on June 18, 2022 in Perth, Australia. (Photo by Paul Kane/Getty Images)

But the possession increase, at least, stemmed the bleeding of their woeful 2022 defence, especially important without McGovern for the last two and a half quarters. The Cats, like the Eagles, got more chances late with 51 inside 50s for the match, but that was as low as 37 early in the final term.

Tellingly, too, the set-up was far less open than it has been in some of the Eagles’ most dire performance this year; they seldom let Tom Hawkins remain one-out in attack against Tom Barrass, regularly pushing numbers back to support and pressuring the ball carrier enough to make pinpointing a pass difficult.

Just three goals combined from Hawkins and Jeremy Cameron was a substantial effort from a side that has leaked goals like a sieve all season. Indeed, without the wiliness of Tyson Stengle at their feet, bagging three goals in the consummate small forward performance, the Cats would have struggled to kick a winning score.

Barrass looked wonderful – almost back to his best a few years ago, when he was one of the most underrated backs in the game. His positioning on Hawkins was flawless throughout; refusing to engage in a tussle, he’d give some space to a noticeably sluggish Tomahawk, then use his elite reading of the play, safe hands and excellent leap to pluck intercept marks or spoil away.

It would be easy to write this match off as a poor one from the Cats – certainly, they weren’t at their blistering best. But given this week so far, it’s almost important to acknowledge how tricky games like this can be, especially on the road against a much-improved Eagles outfit.

Results like this are the difference between the top four and having to do September the hard way, and the Cats, now up into fourth, are well and truly on track for another deep finals run.

As for the Eagles, their time to do the same might be a bit closer than it has appeared this season.