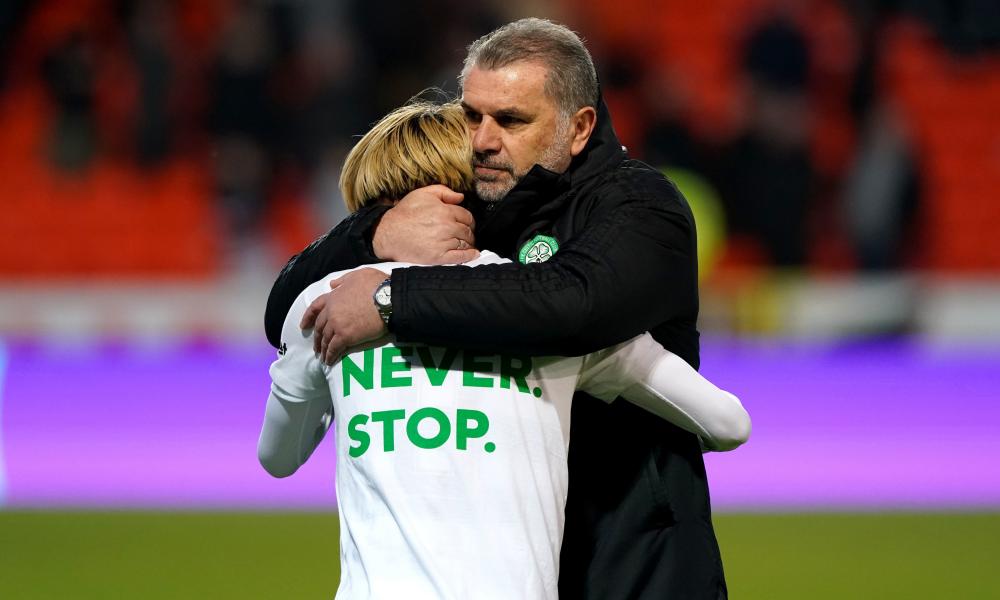 Had Celtic appointed Mark Lawwell as head of recruitment 12 months ago, with Rangers in the midst of title celebrations, the cacophony from an irate supporter base would have punctured eardrums. As the son of Celtic’s former and longtime chief executive Peter Lawwell, there would have been guilt by association in the eyes of paying customers. Seeking a 10th title in succession, Celtic had not so much meekly surrendered to their city rivals as imploded.

Mark Lawwell was indeed hired by Celtic, days ago and to barely a murmur. Ange Postecoglou endorsed the choice. Postecoglou’s photograph was used in the club media story that confirmed the move. The manager’s status in the eyes of Celtic’s following is such that he could add Ally McCoist to his coaching staff and supporters would find a reason to nod in agreement. Celtic, from such a weak position at the point of Postecoglou’s arrival, are the champions of Scotland once more. Postecoglou can do no wrong.

All things Lawwell are pertinent here, with the Celtic regime of recent times deserving to be treated by history far more fairly than was once the case. Dermot Desmond, the principal shareholder, is another who was vilified as Celtic toiled on the field. Desmond’s pursuit of Eddie Howe was ultimately a failure but football has a habit of throwing up unorthodox tales of glory. Celtic hit upon Postecoglou, who has proven the perfect fit.

This has been a period of concerted domestic success for Glasgow’s green half, with the Premiership campaign of 2020-21 the clear exception. Rangers will point to their off-field meltdown of 2012 as mitigation for playing clear second-best over a decade. Not only was that scenario not at all of Celtic’s doing, the Ibrox club continued to spend vast sums on player wages while scuttling about in the lower leagues and later seeking to win back the main title. Since Rangers won the 2011 top flight, Celtic have secured 22 major trophies, including the Scottish Cup of the same year.

Rangers will cite the claiming of a league flag that matters – no Scottish club has won 10 in a row – but the overall picture serves as a reminder of which club is the country’s dominant force. That should not be taken as a dismissal of Postecoglou, who having arrived from Yokohama F Marinos has transformed the atmosphere around Celtic and flown past a Rangers team not at all weakened after winning the league. This, moreover, amid a Celtic squad rebuild.

Postecoglou has been a welcome addition to the scene on umpteen levels. His refusal to berate referees, patronise opposition managers or delve into the kind of small-time soundbites that Old Firm managers can lapse into is to his credit. Postecoglou keeps himself very much to himself, including within Celtic’s training complex, but there are endearing tales of kind acts in the background that paint the Australian in a positive light.

Related: The biggest gap between derby rivals who once played in the same division | The Knowledge

In a football sense Postecoglou wants to know what opposition teams are likely to do without giving any hint of altering Celtic’s approach because of this. In time, especially with a Champions League campaign upcoming, this could be portrayed as a lack of versatility that will cost Celtic but for now he presides over a group with complete belief in their coach. Plan A has worked. Thirty-one league games unbeaten – Celtic endured a rocky league start as Postecoglou found his feet – illustrates the momentum that swept Rangers aside. Desmond and the Celtic board have complete faith in Postecoglou’s ability to identify signings, which means substantial summer transfer backing is a near certainty.

In Kyogo Furuhashi, Postecoglou has delivered Scotland’s most gifted attacking player. Top-six Premier League teams pondered a move for Matt O’Riley from MK Dons while sceptical over whether the midfielder could make the leap from League One. Celtic’s £1.5m purchase of O’Riley looks certain to pay off by way of a significant profit.

Much is made of Celtic’s front‑foot, high-octane play, which can be a joy to watch. Yet there is a steeliness to this team that is widely underplayed. Key moments in this title race include Tony Ralston’s 97th-minute winner at Ross County in mid-December and Celtic’s 2-1 win at Ibrox in early April. On both occasions fortitude won the day.

Download the Guardian app from the iOS App Store on iPhones or the Google Play store on Android phones by searching for ‘The Guardian’.

If you already have the Guardian app, make sure you’re on the most recent version.

In the Guardian app, tap the yellow button at the bottom right, then go to Settings (the gear icon), then Notifications.

Celtic will celebrate this title in the knowledge of how readily they were written off before a ball was kicked. How little we all knew. The green-and-white grip on the Scottish game is such that excitement and anger over events of a year ago look a little silly now.