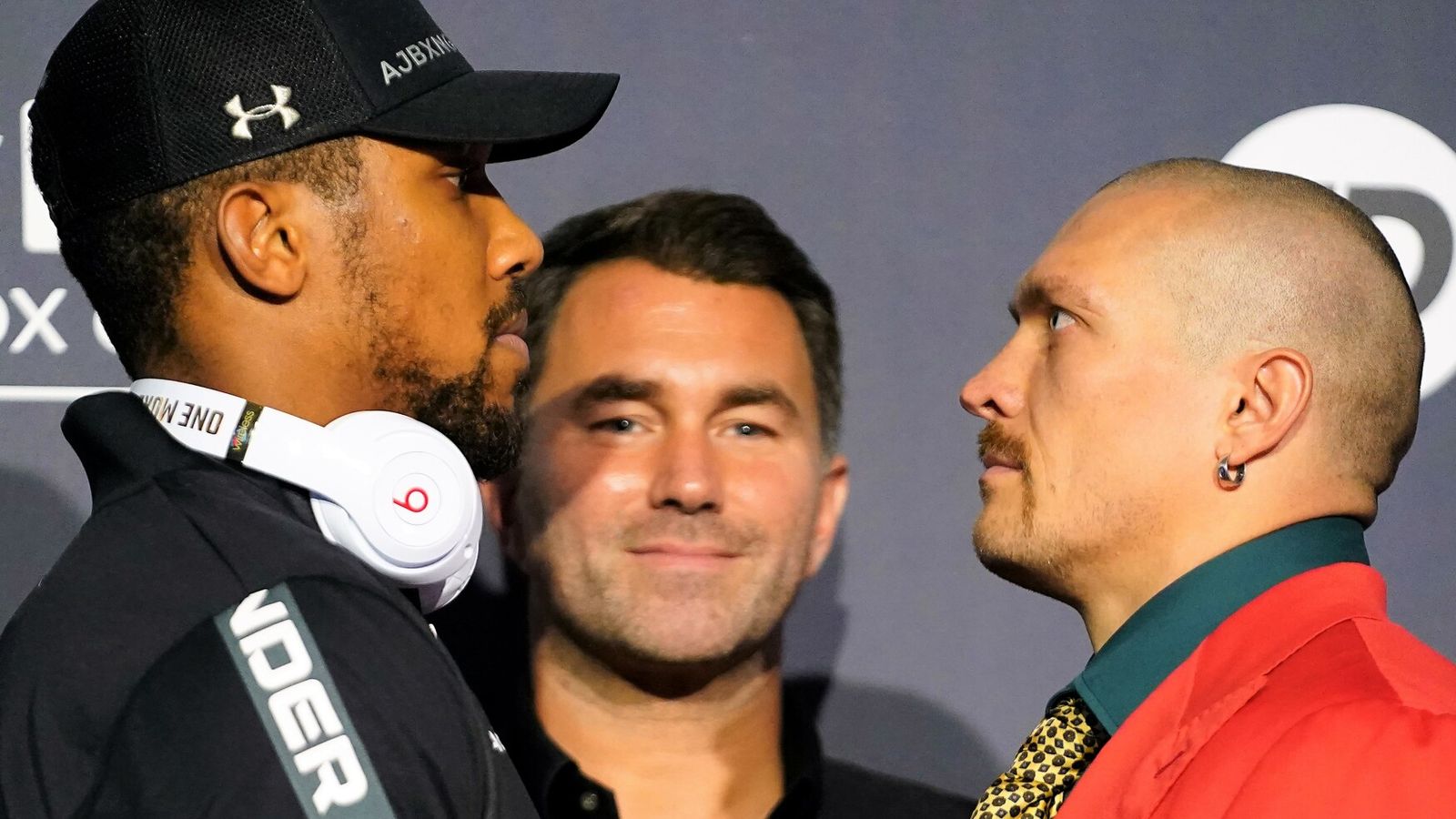 Anthony Joshua and Oleksandr Usyk went eye to eye in a tense first meeting to tee up their world heavyweight championship fight.

The enigmatic Usyk came to Thursday’s press conference dressed like The Joker from Batman for his stare-down with Joshua.

The IBF, WBA and WBO belts will be at stake at the Tottenham Hotspur Stadium on Saturday night, live on Sky Sports Box Office.

Usyk dropped a major hint about his tactics when he told Sky Sports: “I think, at first, it will be chess.”

Asked if he had a size and power disadvantage, Usyk said: “People talk a lot. They say the truth, or they don’t say the truth. It’s all talk.

“We will see on Saturday what happens.

“The power is not about whether someone is big or small. It’s in your spirit.

“David Haye was three times smaller than Nikolai Valuev which shows that it doesn’t matter.”

Joshua and Usyk met with a respectful fist bump and, after staring seriously into each other’s eyes during a head-to-head, they parted with an intense handshake.

“These are the best days of my life,” Joshua said.

“I’m not an easy fight for anyone. I like fighting.

“If you told me I was fighting King Kong, I’d give it a go.”

Joshua was thanked “for daring to accept the toughest challenge of his career” by Usyk’s promoter Alexander Krassyuk.

“Anthony will fight anybody available, he always has does,” replied Joshua’s trainer Rob McCracken.

Joshua added: “I wasn’t on the amateur scene for long enough to know about Oleksandr. But I do a lot of research and really love the Ukrainian style and the Ukrainian people.

“I met Wladimir Klitschko who was a phenomenal champion.”

He also likened Anatoly Lomachenko, Usyk’s trainer and father of Vasiliy Lomachenko, to his own trainer McCracken.

Usyk was scribbling notes while Joshua spoke, then burst out laughing in response to the first question asked to him, before saying: “Me and Anthony will make another step in history, something that later people will talk about and remember.”

Joshua is aiming to finally face WBC champion Tyson Fury to crown an undisputed champion if he comes through his latest defence.

Usyk is bidding to become the third boxer ever, after Evander Holyfield and David Haye, to win world titles at cruiserweight and heavyweight.

Watch Joshua v Usyk on Saturday, live on Sky Sports Box Office, from 6pm. Book it via your Sky remote or book it online here. Non-Sky TV subscribers can book and watch it here.