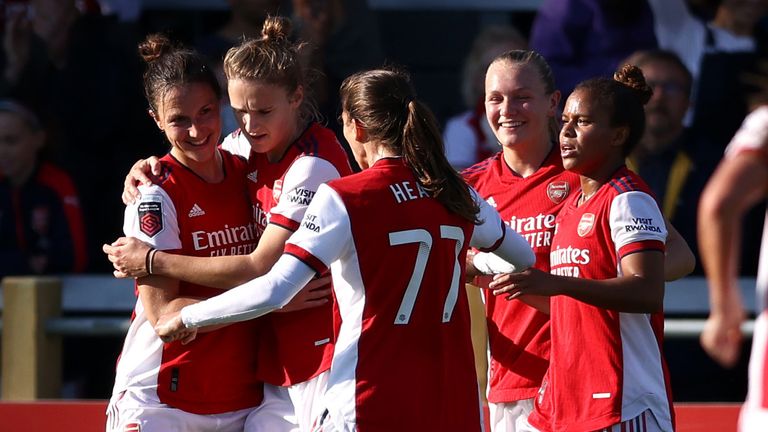 WSL leaders Arsenal Women shook off their Champions League hangover with a comprehensive 3-0 victory over Everton to keep up their perfect start to the league campaign.

“They were slightly flat coming off the back of the Champions League but managed to produce a professional performance,” said Sky Sports’ Karen Carney after a game where the Gunners rarely needed to get out of second gear to coast to victory and put their 4-1 hammering by Barcelona in midweek behind them.

Sandy MacIver had been relatively untroubled in the Everton goal before Katie McCabe’s half-volley stunner looped over her for the opener just after the half-hour, before she was nutmegged by Carlotte Wubben-Moy from a corner (41) as Arsenal built up a comfortable lead before the break.

The hosts looked more dangerous after half-time and had various chances to add to their lead before Frida Maanum powered past MacIver from 20 yards four minutes from time to earn a fifth win from five games, as the Gunners restored their three-point lead at the top of the WSL.

There was no time for Arsenal to lick their wounds from their chastening midweek Champions League loss in Spain, and they had to build their own momentum at Meadow Park after their first taste of defeat this season.

Tobin Heath, starting her first WSL game for the club, pulled a full-length stop out of MacIver in one of few times they carved open the visiting defence before they took the lead 33 minutes in, with a touch of a goalkeeping error slightly detracting from McCabe’s wonderstrike.

A half-cleared corner was crossed back into the box and nodded straight to the Ireland international, who chested it down before firing over MacIver, who should have done better than parrying it into the corner of her net.

She would have been frustrated about the manner of Arsenal’s second eight minutes later too when Wubben-Moy’s close-range shot went through her legs and over the line, but could well protest more about the defensive mix-up in front of her which saw three Everton players trip over one another, and allow the Gunners defender a free run to the back post.

Everton attempted to press Arsenal but managed it only in fits and starts, and finally tested Manuela Zinsberger on the stroke of half-time when Izzy Christiansen fired at the Austrian from the edge of the area. 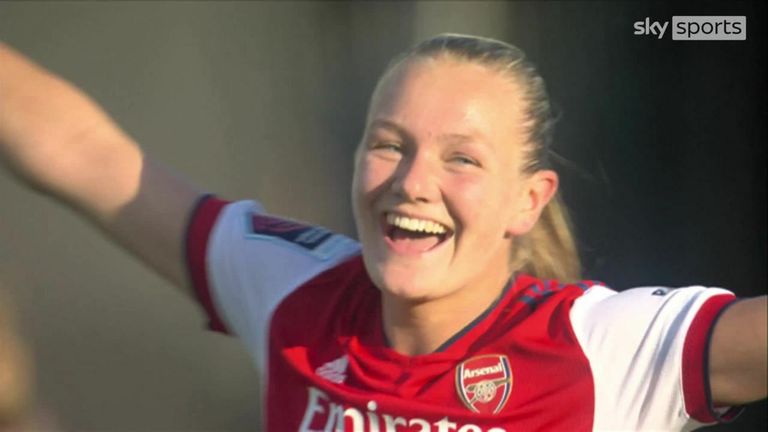 MacIver redeemed herself with a superb double save on the hour mark to keep out Heath’s curler and McCabe’s effort on the follow-up as Arsenal pressed for further goals after half-time.

They should have come long before Maanum’s late third, but McCabe fired wide and substitute Jordan Nobbs scuffed a fine opportunity from 12 yards, before another Nobbs effort deflected off the post and behind.

The Toffees had given up realistic hope of a comeback by the time the Norway midfielder picked up the ball, strode past Aurora Galli and beat MacIver from distance for the cherry on the cake of a different kind of victory for Jonas Eidevall’s side.

Arsenal Women host Hoffenheim in their next Women’s Champions League game on Thursday; kick-off at 8pm.

Everton travel to Manchester City in their first WSL Cup game of the season on Wednesday night; kick-off at 7pm.