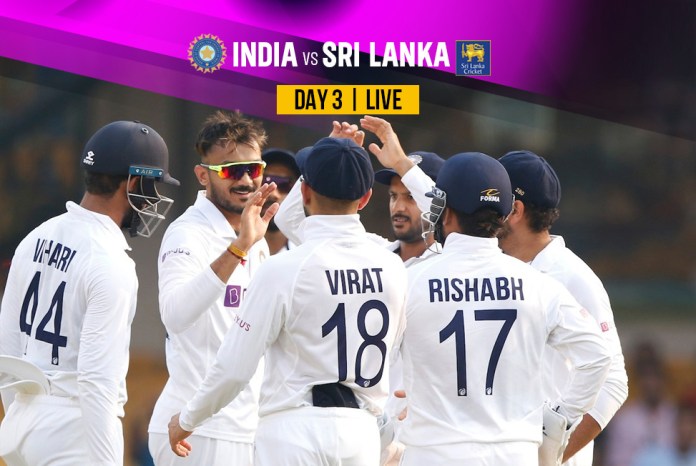 IND vs SL LIVE SCORE – Bengaluru Test LIVE Updates: Rohit Sharma and Team India were made to toil but restored parity in the opening session on Day 3 at the Chinnaswamy Stadium. Sl captain Dimuth Karunaratne and Kusal Mendis put on a 97-run stand for the 2nd wicket before Ravichandran Ashwin and Ravindra Jadeja struck as the visitors ended the session at 151/4. Follow India vs Sri Lanka 2nd Test Live Updates on InsideSport.IN.

Karunaratne and Mendis both scored half-centuries as India searched for a wicket in the 1st session before Ravichandran Ashwin cleverly foxed Mendis who was stumped by Rishabh Pant. Jadeja soon got into the act and castled Matthews, before Ashwin once dismissed Dhananjaya de Silva to put India right on top. Niroshan Dickwella joined Karunaratne at the crease as the duo played put the rest of the overs before Tea on Day 3.

Catch all the LIVE action from the 2022 season.

Bengaluru Test LIVE Updates: After yet another day dominated by Indians, Sri Lanka will need a record 419 runs to win the Pink-Ball Test in Bengaluru while India need nine wickets in 270 overs.

After a 16-wicket first day, 14 wickets fell on Day 2 at the M Chinnaswamy Stadium in Bengaluru with Jasprit Bumrah, Rishabh Pant and Shreyas Iyer emerging as three heroes for India. Bumrah bagged his maiden fifer at home while Rishabh Pant smashed 28-ball fastest fifty by an Indian as Iyer scored his second consecutive half-century to rattle Sri Lanka.

Day 2 summary: Sri Lanka last 35 balls – India’s Day 2 started on a bang with Jasprit Bumrah and R Ashwin combining to take remaining four wickets in just 35 deliveries. After resuming at 86/6, Sri Lanka were bowled out for 109 with Jasprit Bumrah taking his maiden fifer at home. That handed India a healthy 143-run first-innings lead.

India declare at 303/9: After the Jasprit Bumrah show, it was time for a Rishabh Pant storm. He lit up the M Chinnaswamy Stadium with a 28-ball fifty to break 40-year-old Kapil Dev’s record of the fastest half-century by an Indian.

Shreyas Iyer, meanwhile, followed up his first-innings score of 92 with a 67 to smash the second consecutive fifty. However, it was heartbreak for his second home Bengaluru as Virat Kohli could only manage 13 in the second innings. Thus, Virat Kohli lost the moniker of only batsman to have 50+ average in all three formats. He currently has an average of 49.95 in Test.

However, with Axar Patel’s wicket, Rohit Sharma had enough and he called his troops back to declare at 303, leading Sri Lanka by a mammoth 442 runs.

Also Read: IND vs SL Live: Fans play ‘Catch me if you can’ with police after invading pitch during IND vs SL 2nd Test at Chinnaswamy Stadium – Watch video

Sri Lanka stumble again – For Sri Lanka, the struggle just continued. Their resistance lasted just three balls as Jasprit Bumrah’s 140kph-stunner had Lahiru Thirimane back to the pavilion without any score. From there, captain Dimuth Karunaratne and Kusal Mendis saw off the evening with 28/1. In the remaining three days, Sri Lanka will be chasing 419 runs with nine wickets left.

For India, it will be about how soon they can wrap the match up and go back home before entering another bio-bubble for IPL 2022.

What time will the IND vs SL Test match start?
IND vs SL 2nd Test will start at 2:00 PM IST