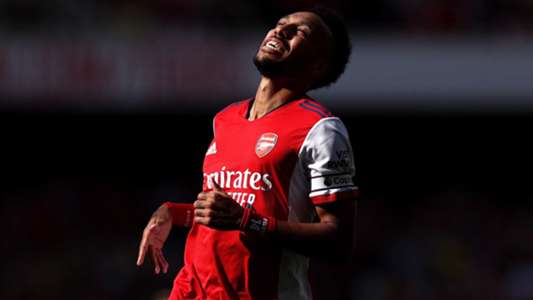 Gabriel Agbonlahor believes the performance of Arsenal striker Pierre-Emerick Aubameyang dropped down a gear after he signed a new contract last summer.

The 32-year-old Gabon international has not enjoyed a good start with the Gunners this campaign, only managing five goals in all competitions – two in the Premier League against Norwich City and Tottenham Hotspur, and three against West Bromwich Albion in the Carabao Cup.

This follows on the 10 Premier League goals he scored last season, having signed a new deal at the start of the 2020/21 campaign, which is in stark contrast to the 22 league goals in each of the two seasons prior to that.

“You can’t just keep someone on the pitch if they aren’t performing,” Agbonlahor said as quoted by HITC. “It’s different with Cristiano [Ronaldo] because he is one of the greatest ever players.

“But Aubameyang was poor. He wasn’t holding the ball up. It didn’t look like he had that pace to get in behind that Brighton defence and it was the right call to bring him off.

“When you are looking for a new contract, there is no lie; your performances are going to go up. Once the contract is signed, naturally you are going to take it down a gear; at least, that’s what you can see in Aubameyang’s performances since he has signed that contract.

Against Brighton & Hove Albion, the former Borussia Dortmund forward was substituted in the 72nd minute for Alexandre Lacazette, after failing to have a shot on target.

Agbonlahor’s sentiments come just a day after Arsenal legend Ian Wright also picked Aubameyang and Thomas Partey of Ghana as some of the players in the team’s starting XI who failed to sparkle at the Amex Stadium.

“It would be easy to get carried away with that result last week [the win over Tottenham] because they were fantastic but this was a very well-drilled Brighton side in difficult conditions and a very young Arsenal side,” Wright said on BBC’s Match of the Day.

“I thought Aubameyang today [Saturday], unfortunately, was poor, I thought Partey was poor. I thought Martin [Odegaard] didn’t play very well. We know what Brighton are going to do, we need to keep the ball and get the counter-attack going. We could not do that today.

“Everything was bouncing off Aubameyang. When he got into opportunities he couldn’t quite get it out of his feet. It just wasn’t happening for him. It was an off day; we saw how sharp he was last week.”