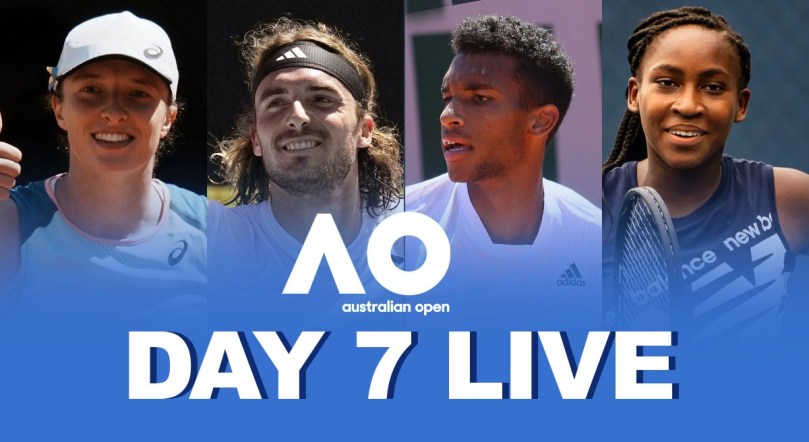 Australian Open LIVE Streaming – Today in Australian Open – Swiatek vs Rybakina LIVE: World No.1 Iga Swiatek and teen sensation Coco Gauff will headline action on Day 7 of the Australian Open on Sunday, 22nd January 2023. Both the players are aiming to reach the quarterfinals. In the Men’s Singles, Stefanos Tsitsipas will face Jannik Sinner in the fourth round. Other players like Felix Auger Aliassime, 10th seed Hubert Hurkacz will also be in action on the day. All the matches will be streamed LIVE on Sony Sports in India. Follow Australian Open 2023 LIVE updates with InsideSport.IN

Felix Auger Aliassime is the sixth seed in the Australian Open. He now has his eyes on a second successive quarterfinal berth at the Australian Open. The 22-year old has picked up hard fought wins so far in the Grand Slam event. He defeated his compatriot Vasek Pospisil in four sets in the first round. He then clinched a five setter against Alex Molcan in the second round. He made his way into the fourth round after a 6-1, 3-6, 6-1, 6-4 win against Francisco Cerundolo.

Jiri Lehecka meanwhile will be making his career’s first ever fourth round appearance in a Grand Slam event. The 21-year old stunned 21st seed Borna Coric with a straight set victory in the first round. He then clinched a four set victory against Christopher Eubanks in the second round. In the Round of 32, he clinched an upset victory over 11th seed Cameron Norrie in a five-setter. He is now looking to extend his dream run in the season opening Grand Slam event.

Stefnos Tsitsipas is the highest ranked player currently in the Men’s Singles. He is set to face a tough challenge against Jannik Sinner in the fourth round. World No.3 Tsitsipas is yet to drop a set in the tournament. In the first three rounds, he clinched victories against Quentin Halys, Rinky Hijikata and Tallon Griekspoor.

15th seed Jannik Sinner meanwhile, entered the fourth round after playing a five-setter against Marton Fucsovics. He had a good start in the tournament with straight set wins against Kyle Edmund and Tomas Etcheverry in the first two rounds.

10th seed Hubert Hurkacz has made his maiden appearance into the fourth round at the Australian Open. The Polish defeated Denis Shapovalov in a five-set encounter in the third round. He also had to play a five-setter against Lorenzo Sonego in the earlier round. In the fourth round, he will face USA’s Sebastian Korda.

Sebastian Korda too is a first-time entrant to the fourth round at the Melbourne major. He clinched his biggest victory of his career by sailing past seventh seed Daniil Medvedev in straight sets in the third round. Korda aims to continue his dream run in the tournament.

Iga Swiatek is dominating the Women’s singles matches in the Australian Opem. The World No.1 dropped just a solitary game in her match against Cristina Bucsa in the third round. She also registered straight set victories against Jule Niemier and Osorio Serrano in the first two rounds. She will be facing 22nd seed and reigning Wimbledon champion Elena Rybakina in the upcoming contest.

Rybakina made her way into the fourth round after a three-set win against 13th seed Danielle Collins in the third round. Rybakina began the tournament with straight set wins against Elisabetta Cocciaretto and Kaja Juvan. She will be making her maiden fourth round appearance in the Australian Open.

18-year old Coco Gauff aims to reach the quarterfinals at the Australian Open for the first time in her career. The teenager is also on a dominant run in this year’s edition. She has sailed past Karolina Sinakova, Emma Raducanu and Bernarda Pera in straight sets in the first three rounds. She now faces 17th seed Jelena Ostapenko in the fourth round.

Ostapenko dropped just three games against unseeded Kateryna Baindl in the third round. Earlier in the tournament, she defeated Dayana Yastremska in straight sets. She then had to win a three-setter against Anna Bondar in the second round. Like Gauff, Ostapenko is also eyeing her maiden appearance in the quarterfinal at Melbourne Park.

How to Watch 2023 Australian Open Live in India?

Indian tennis fans can watch the Australian Open live streaming on the official SonyLIV app along with at least two English TV channels on the Sony-SPORTS network.

The live streaming of the Australian Open 2023 will be available on SonyLIV app in India.