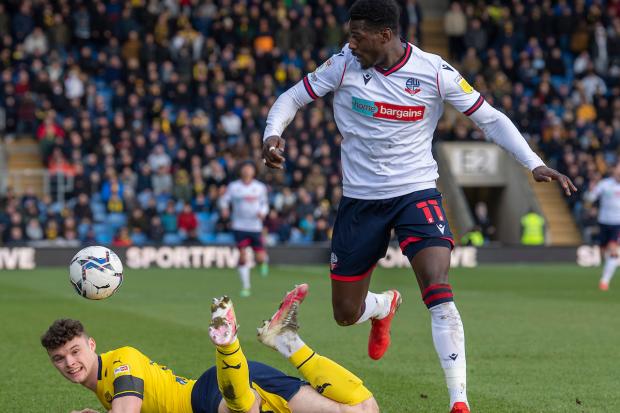 IAN Evatt has described Amadou Bakayoko as a “wonderful player” – but admits he could still be taken out of the side to face Burton Albion on Tuesday night.

The Bolton boss is getting ready to shuffle his attack at the Pirelli Stadium and could take Saturday’s match-winner out of his starting 11 despite a run of three goals in his last four games.

Bakayoko scored the decisive goal in a 3-2 win at Oxford United but voiced his concern after the game at some disparaging comments which had been made on social media during the course of the game.

“Amazing support as always,” he said. “PS seeing some negative tweets about me which isn’t nice but each to their own opinion, I guess. Let’s keep it positive.”

Evatt said after the game that the former Coventry City striker was now getting back to his best form after a bad run of injuries had interrupted his campaign.

But he warned there will still be rotation in Bolton’s attacking positions as the club continues a busy February schedule.

“Baka is a wonderful player and someone that we thought highly of in the summer to bring him in,” he said. “We knew he could have an impact and an effect on the team and he hasn’t had a clear run with injuries.

“You might feel like you’re in great form and you want to play every game, but we have to share it around a little bit to keep the energy levels high, to keep the competitive edge and nature.

“Baka has been one that will suffer from that because of the strength in depth we’ve got in the striking department now, but they all will.”

No player, says Evatt, is guaranteed a starting spot now that he has ample competition within his squad. And he hopes the inter-team rivalry for a regular spot will help push standards even higher.

“Will (Aimson) scored the winning goal on Tuesday and he sat out (at Oxford), but his attitude was first class,” he said.

“Dapo (Afolayan) has probably been our player of the season and today, we didn’t feel it was the right game for him to start.

“We knew for 60 minutes we had to keep things tight and compact. We knew they were dangerous and lively and energetic and it didn’t work out that way because they scored two and we scored two, but they were all very well worked goals.

“We weren’t really cut open or anything like that, but they have to understand it’s a team sport. There’s no I in team, but there isn’t.

“Together everyone achieves more, but it is a team environment and a team culture and it’s a squad game. If Sadio Mane and Salah and Ronaldo and Pogba and Messi can all sit on the bench at some stage, then so can some of ours because we have to share that responsibility out.”