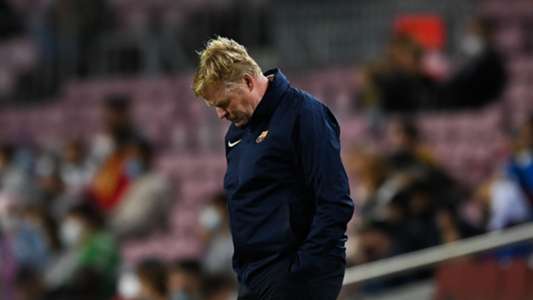 Barcelona boss Ronald Koeman says he does not want to speak about his future anymore after a 1-1 draw with Granada.

The Dutch manager conceded that “today’s Barca is not the Barca of eight years ago” after the club needed a late equaliser from Ronald Arauajo after trailing for 88 minutes.

And, despite rumours that Koeman could be sacked if Barca fail to perform in the coming weeks, the man himself refused to comment on his own future.

What did Koeman say?

When asked about his role at the club going forward, Koeman simply replied: “I’m not going to talk about my future anymore.”

‘Not the Barca of eight years ago’

Reflecting on the match itself, Koeman said that he doesn’t believe Barca have the players to play the way they needed to against Granada on Monday.

“Today’s Barca is not the Barca of eight years ago,” he said. “We played Barca’s way, but we don’t have the speed on the break because [Philippe] Coutinho goes inside, [Yusuf] Demir doesn’t go too deep and that’s the way it is. With Ansu [Fati] or [Ousmane] Dembele it’s different, you have more speed, but you have to look for alternatives.”

He continued: “Before the game you think about winning, especially at home, but our bad start made the game difficult for us. We didn’t come in strong, it was our fault.

“The opponent, after scoring, wasted time from minute two, defended more, did not leave spaces and this is difficult.

“We improved during the game. We changed and we played with crosses from the wings. We put energy into scoring. We wanted more, but one point is better than nothing. We deserved the draw.”