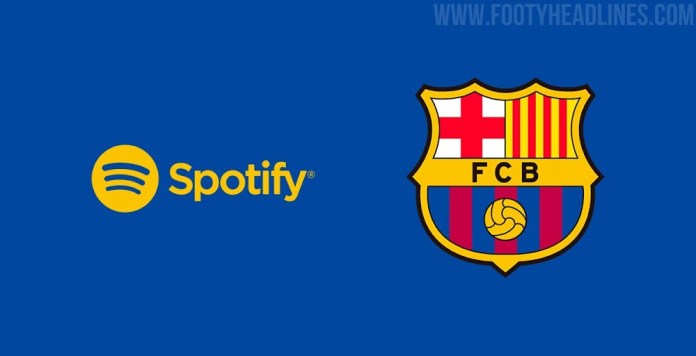 Barcelona New Sponsor deal: Barcelona and Spotify – Barcelona have announced a groundbreaking sponsorship deal with music streaming giant Spotify. As part of the deal, the Spotify logo will appear on the front of the men’s and women’s team shirts for four seasons beginning in 2022/23. And for the first time in the club’s history, the stadium will be rebranded as Spotify Camp Nou. Follow InsideSport.IN for the latest sports news and updates.

Barcelona New Sponsor deal: Barcelona announce stadium and shirt sponsorship deal with Spotify with the stadium to be renamed as Spotify Camp Nou

“FC Barcelona and Spotify, the world’s most popular audio streaming subscription service, have reached an agreement for the Swedish company to become the Main Partner of the Club and the Official Audio Streaming Partner. The brand will appear on the front of both Men’s and Women’s team shirts beginning in the 2022/23 season and for the next four seasons. Spotify will also sponsor the training shirts beginning in the 2022/23 season for the next three seasons.

Spotify and FC Barcelona will be working together to create opportunities for the iconic shirt to become a space that can celebrate artists from across the world. As part of the collaboration, for the very first time in the Club’s history, the Stadium will be rebranded as Spotify Camp Nou. The vision for the partnership is to create a new platform to help artists interact with FC Barcelona’s global community of fans.

BREAKING: Barcelona has agreed to a MASSIVE four-year, $310 million sponsorship deal with Spotify.

Their home stadium will now be called “Spotify Camp Nou,” and Spotify’s logo will be on both the men’s and women’s shirts.

The agreement approved and signed by the Board of Directors of FC Barcelona, is subject to the ratification of the Extraordinary Delegate Members Assembly that will take place the following 3rd of April, through an electronic voting procedure. The Club will soon facilitate all of the logistical details, coinciding with the public announcement of the meeting.

Within the framework of this new alliance, Spotify will become the Main Partner of the Club from the 2022/23 season. The long-term agreement for the stadium’s title rights, begins in July 2022 and will continue over the ambitious redevelopment of the Camp Nou site, as part of the Espai Barça project which will transform the Club’s facilities and environment into a world-class, new integrated Barça entertainment experience open to the city.

The partnership reached by Barça and Spotify is a first-of-its-kind for the club in bringing the worlds of Music and Football together, giving a global stage to players and artists at the Spotify Camp Nou Stadium, and building new opportunities to connect artists and players with fans around the world.  The collaboration also unifies the Main Partner across both Men’s and Women’s kits as part of both organizations commitment to cultivating and supporting diverse talent now and for future generations.

Furthermore, FC Barcelona and Spotify will be working to use the Club’s in-stadium promotional surfaces to present and amplify the work of artists to the Blaugrana’s global TV audience. With the development of Espai Barça, Spotify is joining the club in the next chapter of its history.

The collaboration with Spotify is also part of the Club’s goal to proactively seek partners who share the values and philosophy that define its brand and, at the same time, allow it to retain its status as a global benchmark, inside and outside of the playing fields, in an increasingly competitive environment.

“We are very proud to announce a pioneering alliance like this with a world-renowned organization like Spotify. This partnership will allow us to continue to bring the Club closer to its fans and make them feel, even more, part of the Barça family through unique experiences, combining two activities such as entertainment and football, making it possible for us to connect with new audiences around the world.

It is also a union with which we continue to take steps forward in this new era that we have started, and which demonstrates, once again, the innovative character and the constant search of excellence that distinguish Barça and have made it a unique club in the world.”

Have you heard? We’re partnering with @FCBarcelona to bring music and football together like you’ve never seen before. Learn more from our Chief Freemium Business Officer, Alex Norström: https://t.co/rbeLkuW02o pic.twitter.com/VK4l3sEwG4

“We could not be more thrilled to be partnering with FC Barcelona to bring the worlds of Music and Football together. From July, our collaboration will offer a global stage to Artists, Players and Fans at the newly-branded Spotify Camp Nou. We have always used our marketing investment to amplify Artists and this partnership will take this approach to a new scale. We’re excited to create new opportunities to connect with FC Barcelona’s worldwide fanbase.

Spotify’s mission is to unlock the potential of human creativity, supporting artists to make a living off their art and connecting with fans. We believe this partnership creates many opportunities to deliver on this mission in unique, imaginative, and impactful ways.”

Barcelona New Sponsor deal: Barcelona announce stadium and shirt sponsorship deal with Spotify with the stadium to be renamed as Spotify Camp Nou