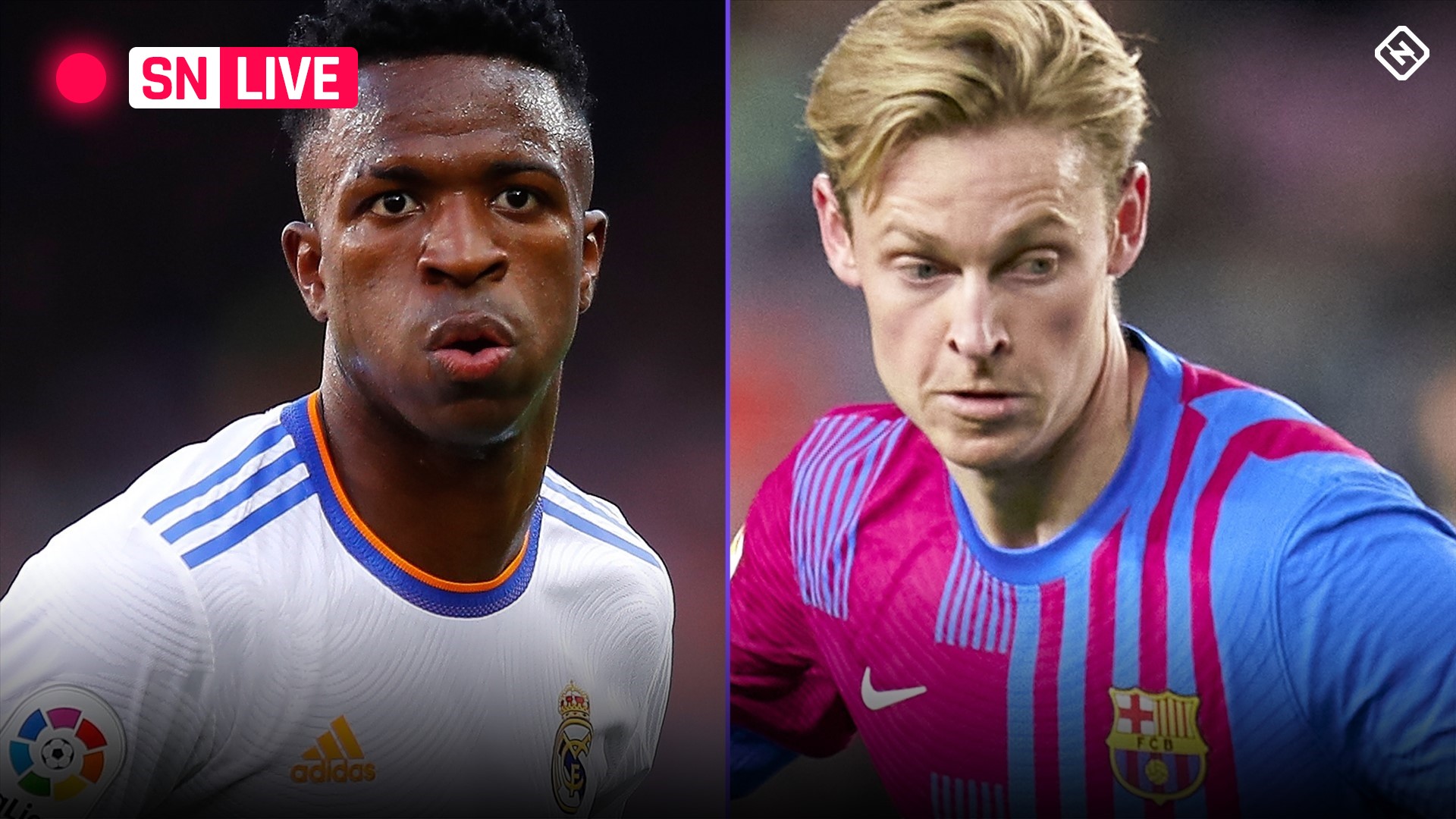 Wherever it’s played and whatever the stakes, the Clasico will never cease being must-watch. On Wednesday, eternal rivals Barcelona and Real Madrid will meet in Saudi Arabia in a loser-go-home Spanish Supercopa semifinal.

After a difficult start to the season, a managerial change and a previous 2-1 league loss to Madrid, Barcelona will actually  have some hope to spring the surprise in this one: New signing Ferran Torres will make his debut for the Blaugrana and he’ll start from the opening minute after his $55 million transfer from Manchester City. Midfield star Pedri is also on the bench.

Real Madrid is the favorite in the match and rightly so: The Merengues have been a machine in the return of Carlo Ancelotti as manager and they’ve been led by rising star Vinicius Junior and the ever-dependable Karim Benzema. Their scoring exploits have Madrid at the top of La Liga, 16 points ahead of Barcelona, and eyeing more silverware in Saudi Arabia.

The Spanish Supercopa pits the La Liga winner and runner-up against the Copa del Rey winner and runner-up in single-game semifinals and a final which takes place on Sunday. The Barcelona-Real Madrid winner faces the winner of the Atletico Madrid vs. Athletico Bilbao semifinal happening Thursday.

Sporting News will be following the event live and providing score updates, commentary and highlights as they happen.

90th min.: We have two minutes of stoppage time and extra time looming.

86th min.: What a stop by Thibaut Courtois! A through ball in behind for Ansu Fati and Courtois comes out to challenge to thwart the chance. Barcelona with an air of confidence in these final minutes.

83rd min.: Goal Ansu Fati! It’s 2-2. Cross by Jordi Alba from the left and Ansu Fati gets the close-range header which beats Thibaut Courtois. What a turn of events.

77th min.: SUBS – Memphis Depay and Nico on for Dani Alves and Gavi. This is the aforementioned kitchen sink coming at Real Madrid.

75th min.: CAUTION – Casemiro gets a card for taking down Gavi. Barcelona getting set to throw the kitchen sink at this with a quarter hour left.

72nd min.: Benzema scores! His first shot on goal was saved by Ter Stegen, but the ball goes right to Dani Carvajal who sends it back in the mixer and Benzema finishes it. Real Madrid back up.

69th min.: Post! Karim Benzema dances around Ronald Araujo and unleashes a left-footed shot off the base of the far left post. Benzema can come up with a moment of magic at any time.

68th min.: SUB – Real Madrid counters with Rodrygo coming in for Marco Asensio, who has been a non-factor in this second half.

66th min.: SUB – Luuk de Jong departs and Ansu Fati is coming on. We’ll see who can get the goals for Barcelona with Ferran Torres and Luuk de Jong out of the match.

50th min.: Great start by Barcelona. Luuk de Jong gets his head to a Dembele shot and that could’ve taken a dangerous deflection. Barcelona has come out with a spring in its step.

49th min.: What a chance for Pedri! He turns and fires on goal, barely missing the target. He created something out of nothing there.

46th min.: SUBS – EZ Abde is on for Ferran Torres, and Pedri comes in for Frenkie de Jong. Quiet debut for Ferran Torres who had a half chance and not much else. He looked eager, but will need some time to reach best form.

Halftime: It was all Real Madrid to start and it looked like it was just a matter of time before Los Blancos would score, especially with Barcelona giving away the ball cheaply. And it was Vinicius Junior who got the goal, showing a real connection with forward mate Karim Benzema. But after the goal, Real Madrid backed off and let Barcelona back into the game.

The Blaugrana threatened with a couple of Luuk de Jong headers and then the Dutchman scored a lucky goal, but he was rewarded for his hard work to press the defender. Xavi Hernandez has stuck with him at forward and De Jong has three goals in his last three games; he is playing the center forward position like no other Barca player can. The second half will be a compelling watch.

3 – Since arriving in Spain, Luuk de Jong 🇳🇱 has scored in three straight games in all competitions for the first time and he is one of five LaLiga players to have scored the most goals in 2021 in all comps (three). Confidence. pic.twitter.com/WvKiPe4JxB

42nd min.: Barcelona ties it! How’d that go in? Real Madrid defender Eder Militao tries to clear a Dembele cross and it goes off Luuk de Jong, off the post and in! It’s 1-1.

39th min.: Real Madrid’s Marco Asensio gives it another try with the left foot from outside the box. This one at least forces Ter Stegen to work after a deflection off Ronald Araujo.

32nd min.: Another Luuk de Jong header and he bounces it right at Courtois. Good spell for Barcelona.

30th min.: What a chance for Barcelona! Simple cross from the left from Dembele and Luuk de Jong heads it straight at goalkeeper Thibaut Courtois. Barca hasn’t created much in attack and can’t let too many of those chance slip by.

25th min.: Goal Real Madrid! Karim Benzema pokes the ball away from Sergio Busquets in midfield, then feeds Vinicius Junior who gets in behind Barca’s defense and it’s lights out. Vini Jr just glides by Araujo and roofs it. Madrid in the lead. Vinicius Junior is having some season: 15th goal of the season in his 27th match.

23rd min.: CAUTION – Ferran Torres gets the first yellow for pulling Ferland Mendy’s shirt. Barcelona is pressing high, but it’s not very effective at winning the ball or causing much trouble. Real Madrid players are getting past it pretty effectively.

Ferran Torres’ 23rd-minute caution is his first yellow card in all competitions in over a year – he was last carded on 21 November 2020 in Man City’s league clash against Tottenham. 😅

Not quite the way he would have wanted to start his Barça career.#ElClasico pic.twitter.com/FbqFRlqd0X

20th min.: Real Madrid’s Vinicius Junior is up for this one. He goes on a sprint after the second Barcelona corner and feeds Asensio, who curls another wide. Vini is wreaking havoc down the left flank.

19th min.: Back-to-back corners for Barcelona. It’s Ferran Torres took one and Dembele the other. Nothing comes of them.

12th min.: It’s Vinicius Junior’s turn to take aim. His shot is on target and Barca ‘keeper Ter Stegen is up to the task. Barcelona’s Ronald Araujo was tracking Vini on his run behind. Barcelona’s attack is non-existent up to now.

11th min.: Ferran Torres is positioned wide right, Dembele on the left and Luuk de Jong as the center forward. Ferran Torres trying a bit too hard to start his Barcelona career.

8th min.: Now it’s Marco Asensio with space to fire a left-footed shot that finishes high. Real Madrid gets forward quick and based on what we’ve seen so far Ancelotti’s men are most likely to score. Barcelona giving away the ball easy.

3rd min.: It’s Karim Benzema with the first attempt of the day after a bad pass attempt and turnover by Dani Alves. The shot goes high and Barcelona gets off easy there. Benzema is hot (22 goals in 25 games) and he’s bound to score if he gets those kinds of looks.

1st min.: We’re off. We’ll see where Ferran Torres lines up for Barcelona.

1:32 p.m. : New Barcelona signing Ferran Torres is ready for his debut, and it comes in El Clasico, nonetheless. The whole squad has arrived at the stadium in Riyadh.

1:25 p.m.: Dani Alves will be plenty motivated to face Real Madrid for the first time since his return.

A day after officially being cleared to register for the club, new signing  Ferran Torres  will get to start against Real Madrid for his Barcelona debut. He recovered in time from a positive COVID-19 test to travel to Saudi Arabia along with young midfielder  Pedri , who starts on the bench.

Luuk de Jong gets the start over Dutchman  Memphis Depay , who will be a sub. Meanwhile, Ansu Fati makes the bench but American  Sergino Dest , who’s been the subject of January transfer rumors, does not.

Real Madrid supposedly had a fit squad for this event, but David Alaba  felt muscle discomfort after training the day before the match and had to bow out with Nacho taking his place in defense.

Manager Carlo Ancelotti opted for Dani Carvajal over  Lucas Vazquez at right back and  Marco Asensio over  Rodrygo at right wing.

How to watch Barca vs. Real

Wednesday’s Supercopa de Espana semifinal between Barcelona and Real Madrid in Riyadh, Saudi Arabia will be broadcast on ESPN and ESPN Deportes, and streamed on ESPN+ (subscribers) and WatchESPN (authentication required).

Fans can also stream the ESPN and ESPN Deportes broadcasts via fuboTV , which offers a free trial for new users .