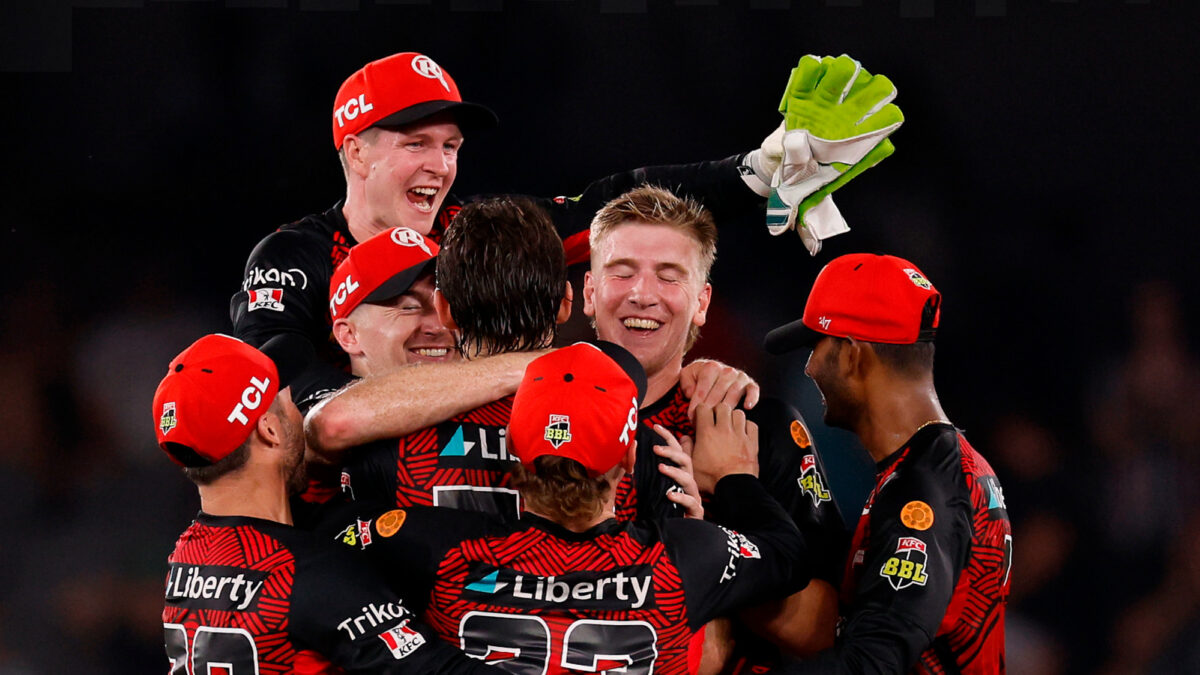 The Renegades might have secured a remarkable six-run Melbourne Derby win over crosstown rivals the Stars – but they had to overcome the BBL’s latest controversy to do it.

Not once but twice in their run chase of 163 did the Stars take advantage of the rule which awards a player six runs for hitting the roof at Marvel Stadium, with Joe Clarke and Beau Webster escaping what would have been near-certain dismissals in the process.

The rule has been in place since an equally controversial incident in the 2012/13 BBL season, when Renegades veteran Aaron Finch hit part of the roof at the stadium, with the ball deemed dead despite clearly travelling further than the boundary.

The difference on this occasion, though, was that neither Clarke nor Webster’s roof hits would have come close to a six via conventional means, with both shots going straight up in the air.

Acting Renegades captain Finch was left fuming in the middle, while Fox Cricket commentator and former great Mark Waugh urged the rule to change back to the way it once was.

“If it looks like it’s not going anywhere near a six, it shouldn’t be a six.

“It should be a dead ball. I think it’s ridiculous. If you hit it straight up and it should have been out, then you get a six as a reward. I think it needs to change.”

Among the Renegades themselves, the rule divided opinion, with star bowler Kane Richardson all for it.

“If you’re good enough to hit it, I guess fair play,” he said.

But speaking after the match, fellow bowler Will Sutherland, who ‘let out a few expletives’ after the incidents, urged the BBL to quickly change the rule.

“They’re the rules and they work for both sides but I do hope they change it,” he said.

Further solutions have since been proffered on social media, including half-joking suggestions that the fielding team should be able to claim a wicket from a roof it if they can catch the ricochet one-handed.

Stars captain Adam Zampa isn’t against such a rule, either.

“Yeah, why not?” he said after the match when asked about the proposal.

“Honestly, it’s a little bit bizarre that they call it a six when the ball goes straight up in the air.

“As a bowler you expect that deceive a batsman and at least be in with a chance of getting a wicket.

The Marvel Stadium roof height ranges from 38 metres high at its tallest point to 24 metres to the underside of its support structure.

Fortunately, the incidents didn’t prove costly for the Renegades, staging a remarkable fightback to claim their second Melbourne Derby victory of the season.

The Melbourne Stars are without question the BBL’s resident chokers.

Throughout their history they have squandered winning positions in must-win games, most famously losing 7/19 to throw away the BBL08 final against the Renegades at Marvel Stadium; and their extraordinary capitulation in the latest Melbourne Derby at the same venue might be their biggest disaster yet.

After an 88-run opening stand between Joe Clarke (59 off 37) and Tom Rogers (27 off 23) left them needing just 54 off 51 balls with eight wickets in hand, the Stars somehow fluffed their lines to lose by six runs.

But Webster’s wicket off the final ball of the over attempting a third six began the spiral, with the Stars only managing 14 off the final four overs as the Renegades took three wickets and bowled 14 dot balls to steal victory.

Neither James Seymour (3 off 7) nor Clint Hinchliffe (1 off 5) could lay bat on ball with any regularity as the requirement ballooned to 12 off the final over, with Nick Larkin’s decision to decline singles off both the first two balls of an excellent final over from Will Sutherland.

A four off the penultimate ball from Larkin left him needing a six to force a Super Over, but Sutherland held his nerve with a perfect yorker to clinch the extraordinary win.

“They’ve really fluffed their lines here, the Stars… they’ve got no one to blame but themselves,” he said.

“They’ve come from nowhere here, the Renegades. You should never lose the game when you need 21 off 25 balls and seven wickets in hand.

The result sees the Renegades jump to third on the BBL table, just one point behind the second-placed Sydney Sixers; while the Stars’ eighth loss for the season all but ends their faint finals hopes. 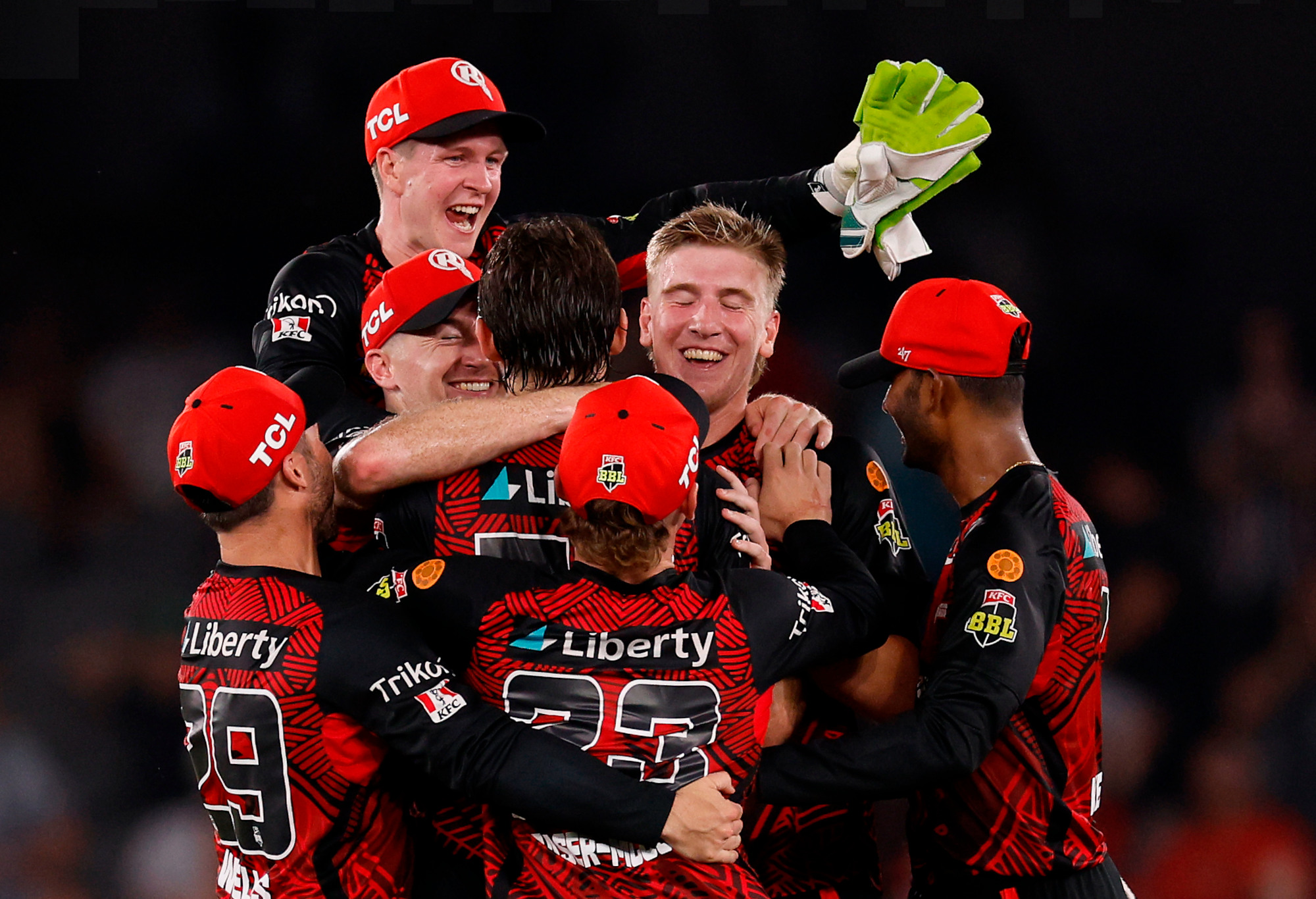 Australia are set for a possible date with the white-ball sensation Suryakumar Yadav in the Test arena after he was selected in India’s 17-man squad for the first two games of the eagerly awaited four-match series next month.

Another limited-overs gun Ishan Kishan has also been brought into the squad but there’s no place for injured pace bowling ace Jasprit Bumrah, who may also not be fit to play in the final two matches of the series either.

The Border-Gavaskar series, which starts on February 9, will also see the return of India’s valuable spinning allrounder Ravindra Jadeja, as long as he’s passed fit again after his own injury woes.

Rohit Sharma will lead a powerful side, with Virat Kohli also a spearhead, though the Indian board has named the squad only for the first half of the series and selectors will doubtless re-evaluate after the opening two matches in Nagpur and Delhi.

The absence of Bumrah is a major blow for the hosts. He had hoped to be back in business after a back problem but has been advised to undergo another month’s rehabilitation before any decision is made over whether to unleash him in the final two Tests in Dharamsala and Ahmedabad in March.

Jadeja hasn’t played any cricket since last August after undergoing knee surgery but looks set, as ever, to be one of the keys to India’s success.

The question remains whether the late-blossoming 32-year-old Suryakumar, despite his eye-catching T20 pyrotechnics, will even make the starting XI, so formidable is a top order that, even without the injured Rishabh Pant, can boast Sharma, KL Rahul, Cheteshwar Pujara, Kohli and Shreyas Iyer.

Mohammed Shami will lead India’s attack, backed by Mohammed Siraj, who made his name on the 20220-21 tour to Australia, with evergreen 36-year-old Ravichandran Ashwin the main spinner, aided by Axar Patel and Kuldeep Yadav.