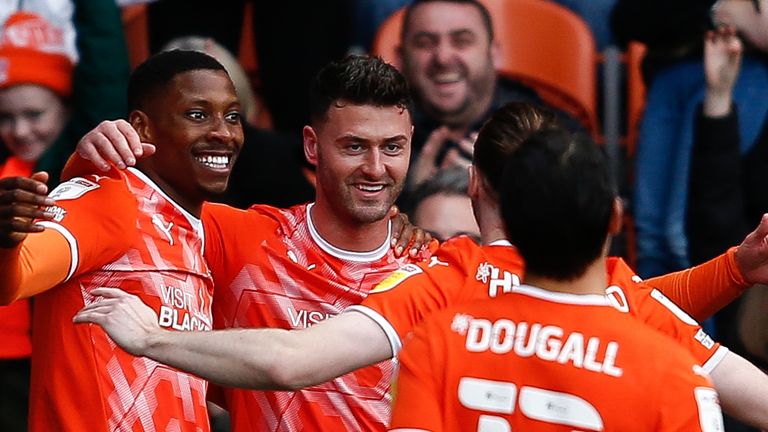 The striker’s fourth-minute header was enough to give the Seasiders a third league win in a row, and fifth in six home games.

Their opponents dominated possession throughout but were frustrated by an organised Tangerine defence.

As a result of the win, Blackpool move to within six points of sixth-placed Luton in the Sky Bet Championship, while Swansea remain 16th.

Top scorer Shayne Lavery was dropped to the bench for the hosts – one of three changes to the side that beat Stoke last week.

The Welsh side brought in Cyrus Christie for the suspended Ryan Manning, in their only change from the 5-1 thrashing against Fulham on Tuesday.

The hosts took advantage of slack marking from a corner in the fourth minute when Madine had the freedom of the box to head in at the back post.

A scramble at the opposite end soon after almost brought a leveller, but the home defence cleared before a chance presented itself.

Josh Bowler went down in the box after a slaloming run on 17 minutes, but his appeals were ignored by referee Stephen Martin.

The visitors applied pressure to the resolute home defence – Michael Obafemi inches away from connecting with a clipped cross from deep.

Swansea had 74 per cent of possession in the first half an hour of the game but failed to have an attempt on goal.

Blackpool almost made them pay when Charlie Kirk raced through on the left-hand side, but goalkeeper Andy Fisher stood strong to deny him before Madine saw a shot blocked.

From the resulting corner, the goalscorer nearly repeated his feat from the opening minutes but saw Fisher parry his header over.

Swansea came close with a free-kick from the right-hand side as Obafemi again failed to turn home a cross from Jamie Paterson.

Then, on the stroke of half-time, Bowler wasted a glorious opportunity, slotting wide when put through one on one.

The winger continued to torment the Swans after the break, cutting inside from the right and hitting the side-netting.

Marvin Ekpiteta headed over after the hour mark as the Tangerines continued to create the better openings.

Matt Grimes went close from 25 yards for the away side on 73 minutes, his strike just wide of the post.

Blackpool pushed for a second goal but, in the end, one was enough to extend their unbeaten streak over Swansea to nine games – a run stretching back to April 2006.