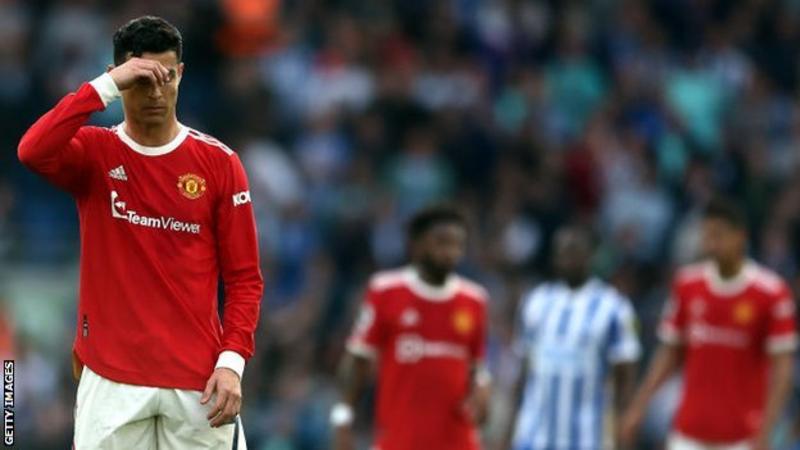 “You’re not fit to wear the shirt.”

It is hard to imagine how Manchester United’s 4-0 thrashing at the hands of Brighton could have been more embarrassing – and even their own fans turned against them.

Brighton, a side who had not won at home in 2022, ran riot at the Amex Stadium in a barely believable 90 minutes of football in which United were humiliated, outplayed, out-thought and outworked.

The Seagulls had only ever won three times in 27 meetings with the 20-time English champions. The fourth was a night Brighton, aiming to finish in the top half of the top flight for the first time in their 121-year history, will never forget.

Moises Caicedo and Marc Cucurella both scored their first Premier League goals, before Pascal Gross calmly added a third and Leandro Trossard bundled in a fourth with 30 minutes to go. Meanwhile, United did not even register a shot on target until the 56th minute when already 2-0 down.

As that Trossard goal was being checked by a video assistant referee for a potential handball, the United fans showed their anger at their own players.

The “you’re not fit to wear the shirt” chant was not aimed at one specific person, it indicated a collective anger and frustration at a side who are now guaranteed to score United’s lowest points total since 1990-91.

The away fans did, though, stay in great numbers right to the end and created a memorable atmosphere after getting their point across. But there was no mistaking the fact the players had let the fans down.

Ralf Rangnick, in his penultimate game in charge in what has been a miserable six-month spell as interim boss after the club sacked Ole Gunnar Solskjaer in November, looked ashamed of his team at the final whistle.

“It was a terrible performance,” said the German, who was not allowed to strengthen his squad in the January transfer window, while Anthony Martial and Donny van de Beek left on loan.

“From the first until the last minute it was not enough; we can only apologise for this performance and a humiliating defeat.

“We were never in a position where we could stop them playing through our lines. We told the players to be as compact as they could but we couldn’t stop it.

“I don’t think they ignored the gameplan but we weren’t able to stop them. We gave them too much space and if you do that against a technically good team like Brighton, you will get punished.”

This season cannot end quickly enough for United. This result ended their slim hopes of Champions League football next term and even a Europa League spot is not guaranteed. Dropping into the third-tier Europa Conference League is a genuine possibility.

Erik ten Hag, who could win the Dutch Eredivisie with Ajax on Sunday for what would be the third time in four years, is the man tasked with rebuilding the club.

As each day goes on, the job looks harder and harder.

Of their past 12 goals, 37-year-old Cristiano Ronaldo has scored nine of them. But he cut a frustrated figure throughout, picked up a booking and had limited service on Saturday.

Will he be prepared to stay and maybe play in European football’s third tier next season or will he fancy another crack at the Champions League, a trophy he has won on five occasions?

And will Ten Hag want to build his side around a player who turns 38 in February, no matter how talented? United are a side who need a complete rebuild. Rangnick almost said as much earlier this week when asked what positions they were strong enough in. “Goalkeeper” was the answer.

From finishing second last season, United’s progress has not just stalled, but been slammed into reverse. Without Ronaldo’s 18 Premier League goals, they would not be in any European competition next year, and maybe not even in the top half.

League leaders Manchester City have only dropped 19 points all season, a figure United matched in November on another humiliating day when they lost 4-1 at Watford – a result that cost Solskjaer his job.

In front of a record crowd at the Amex of 31,637, this defeat felt even more humiliating than that loss, or the 5-0 home demolition by Liverpool, the 4-0 thrashing in the return fixture at Anfield or the 4-1 defeat at Manchester City.

Brighton players were trying party tricks, a nutmeg from Cucurella on Diogo Dalot was cheered as loudly as each goal. Every touch of the ball from a blue and white shirt received an ‘ole’ from the crowd – and the winning margin could, and probably should, have been even wider.

Alexis Mac Allister shot against the outside of the post and Danny Welbeck, against his old club, was unlucky not to score a late fifth with a wonderful curled effort.

Stand-in United captain Bruno Fernandes admitted his side’s fans were within their rights to shout out the ‘you’re not fit to wear the shirt’ chant.

“What we did, what I did, was not enough to be in a Manchester United shirt and I accept it,” said Fernandes.

“They outplayed us, they always had a solution, pressed us better and deserved the result.

“A little bit of everything [went wrong]. Quality. Mentality. They deserved to win and we deserve to be in the position we are in now.

“It’s something we have to look at and be embarrassed about because that was not good enough from us and we have to do much better.

“I signed my contract because I think the future can be good, but obviously many things need to be fixed, as we have seen this season.”