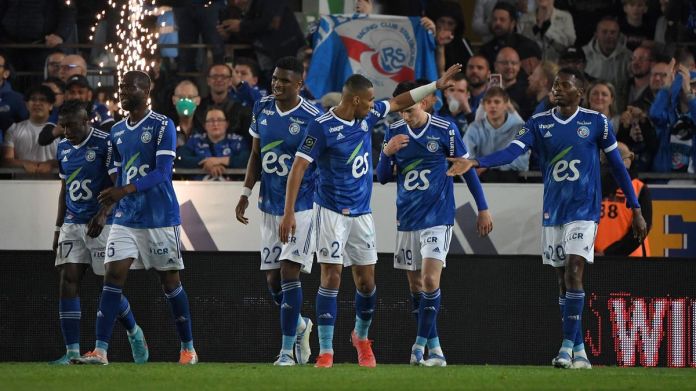 Strasbourg vs PSG: Kylian Mbappe scored a brace as recently crowned Ligue 1 champions Paris Saint-Germain were held to a 3-3 draw at Racing Strasbourg in a breathtaking encounter on Friday. Follow LIGUE 1 LIVE Updates with InsideSport.IN

It was Anthony Caci’s late equalizer goal that was the party spoiler for Paris Saint Germain as Kylian Mbappe scored two goals for PSG and also had an assist to his name.

Strasbourg wasted no time in scoring their first goal as they netted in the second minute of the match itself. It was Kevin Gameiro’s right-footed shot from a difficult angle on the right to the high center of the goal. Lucas Perrin’s through ball had made the difference here as Strasbourg led 1-0 to PSG.

Kylian Mbappe scored in the 23rd minute to level the scoreline 1-1. His right-footed shot from the left side of the box to the bottom left corner went in and was assisted by none other than Neyman himself.

Both the teams kept piling on the pressure as they approached the halftime with a scoreline of 1-1. The first half belonged to both the teams as they were 50-50 in creating and executing their chances.

The second half saw a flurry of goals as 4 goals were netted. PSG scored two quick goals in quick successions. First, it was Achraf Hakimi’s right-footed shot in the 64th minute from the center of the box to the top left corner and was assisted by Kylian Mbappé.

Kylian Mbappe till now was having a very good game as he scored one and also had an assist to his name. Then in the 68th minute, it was Kylian Mbappe’s right-footed shot from the center of the box to the bottom right corner that went in.

It was a game set match for PSG and it looked like a difficult 22 minutes for Strasbourg. Nobody could have imagined them coming back from there one. But, they kept their composure and they made sure no more errors were made from them.

Seven minutes later, in the 75th minute, Marco Verratti scored an own goal which gave Strasbourg the hope they needed to make a comeback in the game.

In the extra time added, Anthony Caci on his weaker foot did the impossible. He scored with his right foot from the center of the box to the bottom right corner and was assisted by Dimitri Lienard with a cross. The match ended in a 3-3 draw as both the teams took 1 point each.