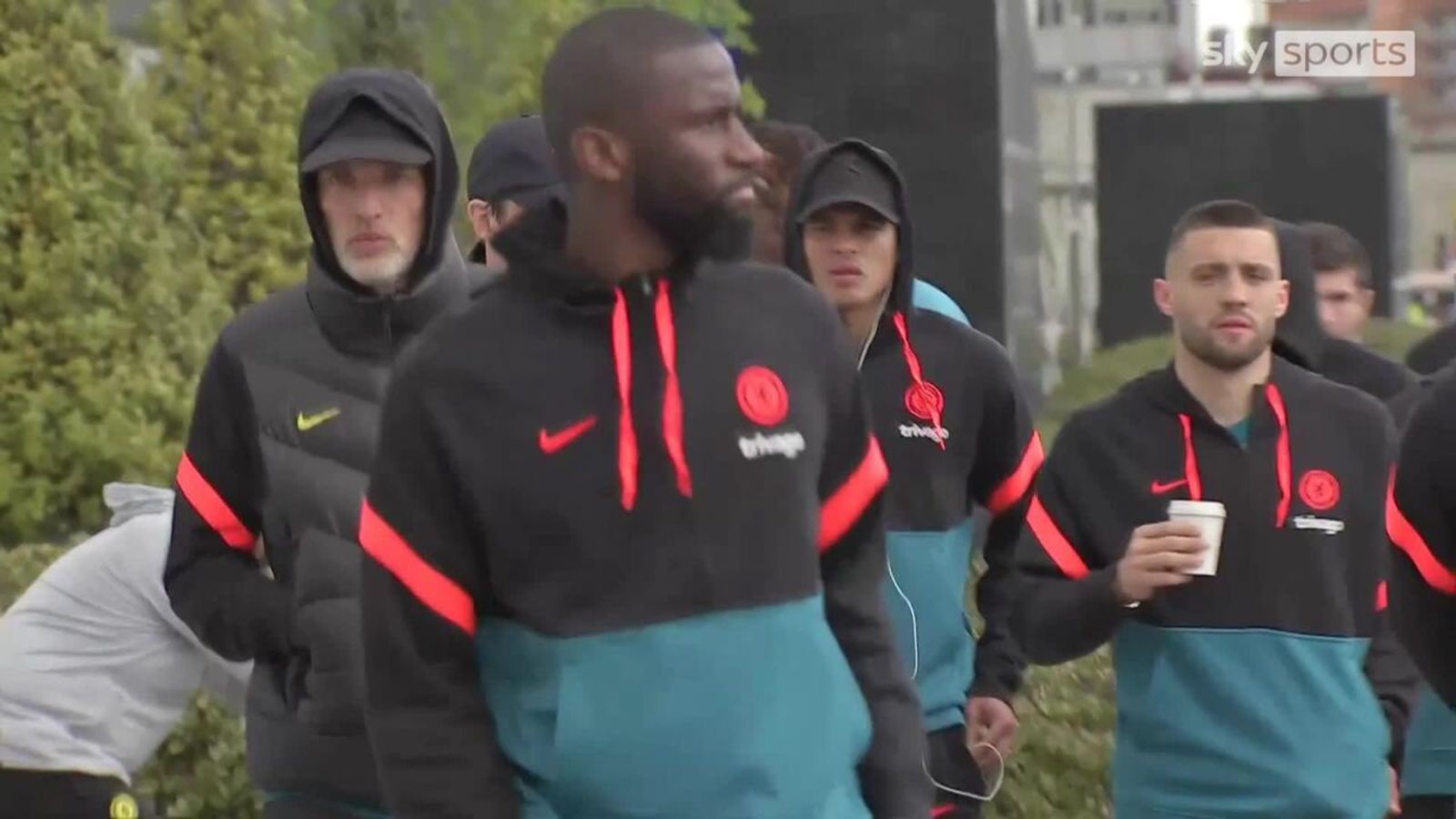 The Champions League quarter-finals continue this week, and it starts with holders Chelsea heading to Real Madrid on Tuesday, before Liverpool and Manchester City play on Wednesday.

The second legs of the quarter-finals begin on Tuesday as holders Chelsea try to claw their way back from a 3-1 quarter-final first-leg defeat against 13-time winners Real – with Villarreal also in action at Bayern Munich.

Pep Guardiola’s City – fresh from Sunday’s exhilarating 2-2 draw against title rivals Liverpool – are also off to the Spanish capital as they face Atletico Madrid, taking a 1-0 lead into the second leg after last week’s win at the Etihad, looking to reach the semi-finals for a second consecutive year.

Liverpool host Benfica at Anfield with one foot in the final four, after a 3-1 win in Lisbon last Tuesday, as they continue their push for an historic quadruple, with one eye firmly on Saturday’s FA Cup semi-final against City on Saturday.

Make-or-break week for Chelsea
Chelsea face the monstrous task of becoming just the second team in Champions League history to overturn a two-goal deficit following a first-leg home defeat when they play at the Bernabeu on Tuesday night.

If they are unsuccessful in Spain, Chelsea’s whole season rests on the outcome of Sunday’s FA Cup semi-final against Crystal Palace at Wembley, with the Blues comfortable in third and having no hope of a late title push.

Chelsea recovered well after back-to-back defeats to Brentford and Real by thrashing Southampton 6-0 on Saturday, but head coach Thomas Tuchel still feels a comeback is unlikely.

“We need nothing else other than a fantastic script,” said Chelsea head coach Tuchel on Monday.

“The task and challenge is incredibly hard and against who we play and where we play. We’re allowed to dream, it’s sometimes important to imagine things and dream about.

“It will not shift the focus, we will support our team, and we will try hard. It’s sports, and it’s a game, and that’s the beauty of the game, that everything is possible always.”

Are Chelsea at a ‘huge disadvantage’ vs Real?

Tuchel believes Chelsea face a “huge disadvantage” in overturning their Champions League deficit to Real Madrid as the Spanish side have been able to make five substitutions throughout the season.

Premier League clubs have voted to reintoduce the rule of five subs next season, but have only been able to use three domestically in this campaign.

“First of all, we wanted it more physical but we did not work hard or intense enough in the first match,” he said.

“Second of all, we face a huge disadvantage in terms of physicality because Real Madrid has a whole year with five changes and we play the most demanding league, we play the most matches throughout the season and throughout 2022 so it is not always easy to play a physical game.

“We are a team that needs the physicality, the sharpness, the commitment and the investment to be a special team. We could not implement that enough in the last match.

“This was also due to their quality, their capacity to slow the game down, to control the match by ball possession.”

Ancelotti ‘happy’ to depend on Benzema

Real Madrid boss Carlo Ancelotti admits his side are reliant on Karim Benzema, their top scorer in the Champions League, and says there is “no reason to hide it”.

After Benzema scored a hat-trick at Stamford Bridge in the first leg – becoming just the fourth player to score back-to-back trebles in Europe’s elite competition – Ancelotti said the 34-year-old striker is ageing like a “fine wine”.

The France international (11) is behind only Bayern Munich striker Robert Lewandowski (12), who has also scored two hat-tricks in Europe this season, in the Champions League scoring charts.

“The season is showing that we have two forwards who have been shining out, Vinicius Jr and Benzema,” said Ancelotti.

“In the past we had Karim, Cristiano or Gareth Bale who scored many goals. To say that we are dependent on Benzema is true, no reason to hide it. Happy to have this dependency, quite happy. I am very happy to depend on Karim Benzema.”

Ancelotti insists his players are not relaxed despite taking a two-goal advantage to the Bernabeu and says Real should respect this “very strong” Chelsea side.

The Real boss added: “I think everybody, the fans and ourselves, know it will be a tough match. It will be a difficult one, like it always is in a Champions League quarter-final.

“Whatever happened in the first leg we still need to know that we have to go out and play a full match, that we will have to suffer, fight, compete. We will have to stay in the match for 90 minutes.”

Chelsea goalkeeper Édouard Mendy conceded three goals in the first leg against Real Madrid, as many as he had in his previous 10 appearances in the Champions League combined. His error leading to Real Madrid’s third goal was also the first one he has made in 20 appearances in the competition.
Real Madrid’s Karim Benzema (1) and Vinícius Júnior (4) have assisted each other a combined five times in the Champions League this season; the most of any teammate duo. Indeed, Vinícius Júnior’s four assists for Benzema is also the most from one player to another in 2021-22.
No Chelsea player has been directly involved in more Champions League goals under Thomas Tuchel than Christian Pulisic (6 – three goals, three assists), while the American also scored the Blues’ only goal away to Real Madrid in last season’s semi-final.
Benzema has scored 11 goals for Real Madrid in the Champions League this season, already the most by a French player in a single campaign in European Cup/Champions League history. His 11 goals this season is as many as he had scored in the previous two editions of the tournament combined (six in 2020-21 and five in 2019-20).
Real Madrid manager Carlo Ancelotti is looking to qualify for the semi-finals of the Champions League for the eighth time in his career; the joint-most by a coach in the competition’s history, along with Pep Guardiola and José Mourinho (eight times).
In Tuchel’s 16 games in charge of Chelsea in the competition, 40 per cent of the goals they have conceded in the Champions League (4/10) have been scored by Benzema. Despite only having played one leg, this is already the most goals Chelsea have conceded in a knockout tie in the competition under Tuchel (3).
Chelsea trail by two goals from the first leg at Stamford Bridge, while they will have to equal their biggest margin of victory away from home in the Champions League knockout stages to enforce extra time (won by two goals on three occasions). They have only scored more than two goals away from home in the knockout stages of the competition once previously, beating Liverpool 3-1 in 2008-09.
Real Madrid have progressed from nine of their previous 10 ties in the Champions League knockout stages when winning the first leg away from home, with their only elimination in this scenario coming against Ajax in 2018-19 (2-1 away, 1-4 at home).
This will be Chelsea’s first ever game at the Santiago Bernabeu Stadium in European competition, with last season’s away game at Real Madrid being played at the Alfredo Di Stéfano Stadium. No English side has ever won at the Bernabeu in the Champions League by more than a single goal, with Real Madrid only losing three of the 12 games overall (W6 D3).
Real Madrid’s 3-1 win at Stamford Bridge was their first victory against Chelsea in European competition, having drawn two and lost three of their first five such meetings. The last side to win both legs against Chelsea in a Champions League knockout tie was Bayern Munich in the Round of 16 in 2019-20.
Can Villarreal stun Bayern again?
Villarreal find themselves just 90 minutes away from reaching a first Champions League semi-final since 2006 – when they were beaten by Arsene Wenger’s Arsenal – after Arnaut Danjuma secured a 1-0 win over Bayern Munich at El Madrigal last Wednesday.

Six-time winners Bayern Munich have lost the last five Champions League knockout ties in which they have trailed after the first leg, with four of those instances coming against Spanish sides, giving Villarreal hope that they can progress as they take a 1-0 lead into the second leg at the Allianz on Tuesday night.

Villarreal head coach Unai Emery, formerly of Arsenal, has won more Europa League titles than any other manager, but is looking to reach the last four of the Champions League for the first time in his career.

Big week for Man City and Liverpool continues
The Premier League title race remains on a knife edge after Sunday’s pulsating 2-2 draw between Man City and Liverpool – and there is no let up for the two title rivals, with both in Champions League action on Wednesday before facing off against each other in the FA Cup semi-final at Wembley on Saturday.

City dominated the first leg against Atletico, but only hold a slender 1-0 lead going into the second leg in Madrid after a backs-against-the-wall display from the La Liga side in Manchester. Diego Simeone’s men will have to be more progressive in their play on Wednesday night, however, as they need two goals to progress without penalties.

Liverpool, meanwhile, may be able to rotate against Benfica after Luis Diaz – signed from Porto in January – came off the bench to secure a 3-1 victory for his new side on his return to Portugal last Tuesday. Diaz did not start at the Etihad on Sunday, so is likely to do so at Anfield against Benfica.

Round of 16
First-leg fixtures
Tuesday February 15

Final
Scheduled to be played on Saturday May 28 at the Stade de France, Saint-Denis.