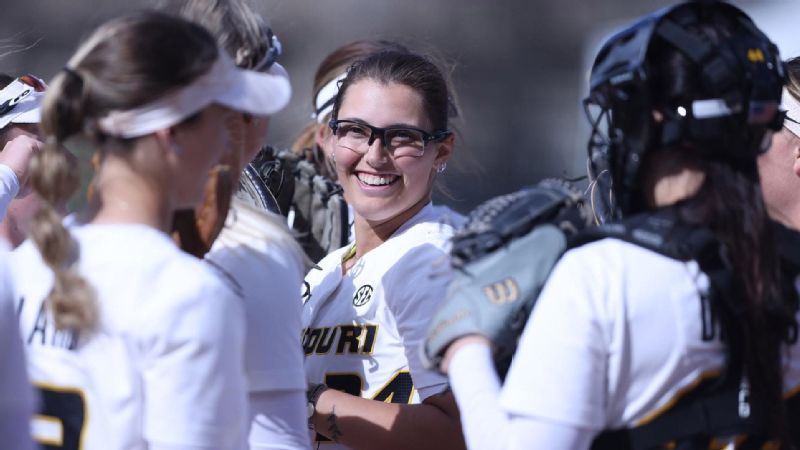 COLUMBIA, Mo. – No. 24/25 University of Missouri softball (23-13, 3-5 SEC) downed Kansas City (8-23, 4-2 Summit) by a score of 5-1 in a midweek contest on Wednesday night. Laurin Krings picked up her 12th victory of the year while Casidy Chaumont led the way offensively with a pair of extra base hits, including a two-run homer in the third inning.

After a scoreless frame from Laurin Krings, Mizzou was able to get on the board in the first inning for the fourth-straight game. Jenna Laird and Kendyll Bailey each singled before Alex Honnold brought Laird in on a base hit down the left field line.

Mizzou threatened in the second inning with a pair of runners in scoring position, but nothing crossed the plate. In the circle, Krings retired each of the first nine batters that she faced while striking out six of them.

In the third, Casidy Chaumont added to the Tigers’ lead in the third with two outs and a runner on first. Chaumont drove a 1-0 pitch over the center field wall for a two-run shot despite a heavy crosswind, making it 3-0.

The Roos produced their lone run of the night after a leadoff double in the top of the fourth. A groundout moved the runner to third and an infield single cut the Tigers’ lead to 3-1.

Mizzou again threatened in the fifth inning. Kendyll Bailey singled up the middle before Hannah McGivern entered as a pinch runner and stole second with one out. Alex Honnold roped a sharp line drive to the right side, but it ultimately turned into a double play.

For the second time in the game, Casidy Chaumont was at the center of a Mizzou rally. She led off the bottom of the sixth inning with a double to left center. Kelsee Mortimer entered as a pinch hitter and knocked a base hit back up the middle, scoring Chaumont and putting the score at 4-1. Jenna Laird then smacked single of her own into left center, putting the score at 5-1.

The Roos led off the seventh with back-to-back singles to put some pressure on the Tigers. Emma Nichols entered from the bullpen and rolled out a double play to slow the threat before recording the final out.

Casidy Chaumont went 2-for-3 on the day with two runs, a double, a home run, and two RBI. She has 10 multi-hit games on the season.

Chaumont’s 12 extra-base hits in 2022 match her season total from a year ago. She has three multi-extra base hit games in 2022.

Her two-run home run was her fifth of the season, matching her career best total from 2018 at Louisiana.

Kendyll Bailey went 2-for-3 at the plate with a pair of singles, extending her hitting streak to eight games, matching the longest such streak of her career. The graduate student has also reached base safely in 12 consecutive games.

Her second hit of the night brough her season hit total to 38, a career best mark.

Bailey has turned a double play in three-straight games.

Jenna Laird went 2-for-4 on the night with a pair of singles and an RBI. She has scored a run in five-straight games, including four first-inning runs.

Laurin Krings picked up her 12th win of the season while tossing five innings and striking out nine batters while allowing only one run. She allowed only two baserunners and did not concede a walk.

Mizzou travels to Starkville, Miss. for a three-game series against the Mississippi State Bulldogs form April 8-10. Friday’s first pitch is set for 6 p.m. on SEC Network +.