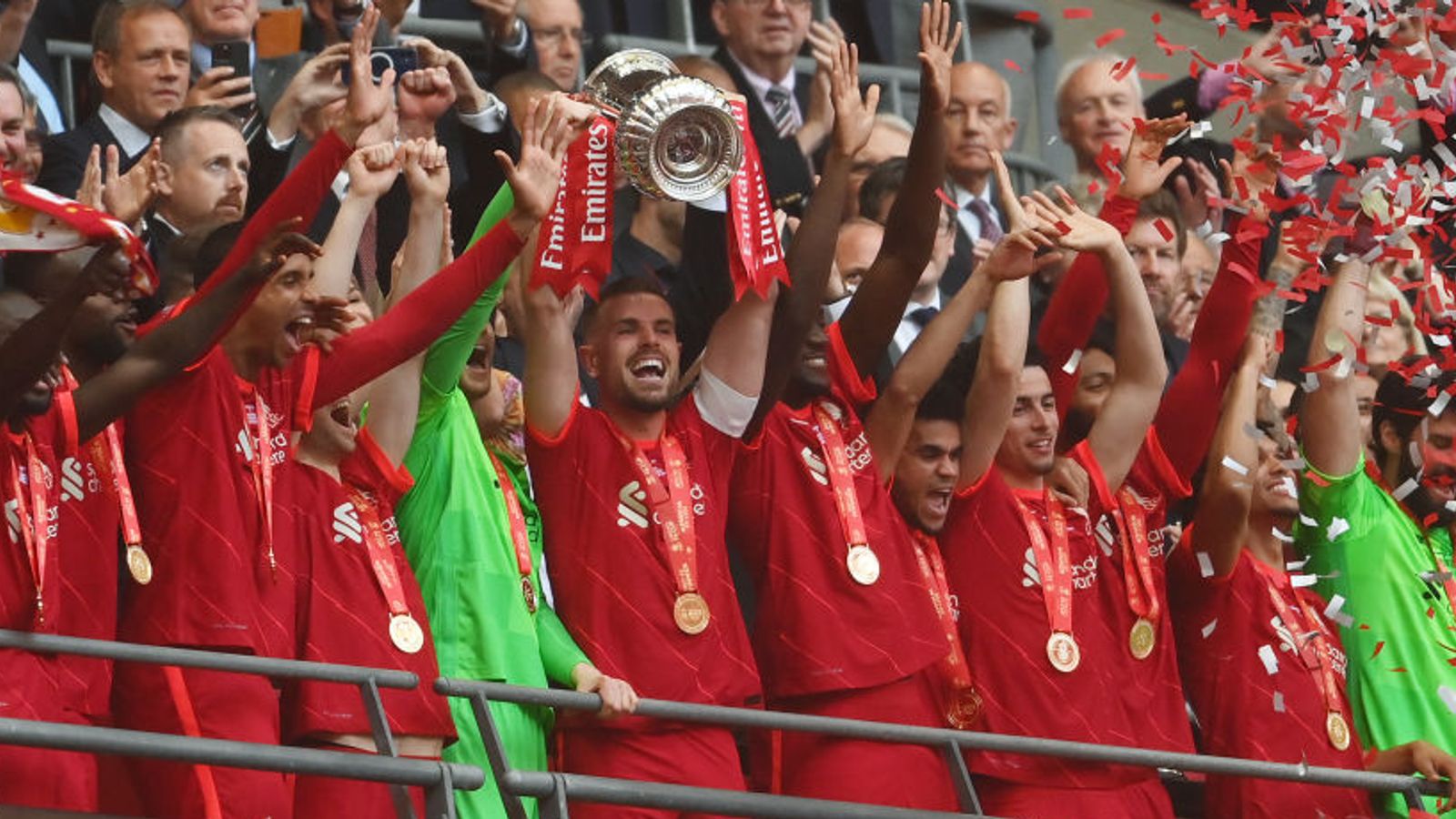 Liverpool completed a clean sweep of the domestic cups with another penalty shoot-out win over Chelsea at Wembley in the FA Cup final, as Kostas Tsimikas struck the decisive spot-kick after Mason Mount’s effort was saved by Alisson.

It had taken 22 penalties to separate the sides in February’s Carabao Cup final and while there were only 14 taken after another goalless 120 minutes on this occasion, it was once again Jurgen Klopp’s side who clinched the silverware by the narrowest of margins, handing Chelsea a third straight FA Cup final defeat in the process.

Mount dropped to his haunches as Liverpool’s players and staff ran off to celebrate with their fans amid a fog of red flares – he has now lost six major finals at Wembley.

Earlier in the shoot-out, Sadio Mane – who scored a winning penalty for Senegal at the Africa Cup of Nations and another to send them to the World Cup earlier this year – had missed the opportunity to clinch it for Liverpool following Cesar Azpilicueta’s strike against the post, but Tsimikas kept his cool to become the unlikely hero.

Liverpool’s success was tempered by injuries to Mohamed Salah and Virgil van Dijk, which could potentially damage their hopes of an unprecedented quadruple, with their Premier League pursuit set to continue on Tuesday at Southampton on Sky Sports and their Champions League final with Real Madrid on May 28.

But the scenes of wild celebration at the end on the pitch and in the stands suggested Liverpool were only focused on this moment. They last won both domestic cups in 2000/01 and this was their first FA Cup triumph since Steven Gerrard’s heroics against West Ham in 2006.

The 141st FA Cup final, 150 years on from the first, had seemed unlikely to go all the way in the opening 15 minutes, as livewire Luis Diaz gave Trevoh Chalobah real problems during an electric start from Liverpool, but Chelsea gained a foothold and hit the bar through a Marcos Alonso free-kick during their own fast start to the second half.

The woodwork was then struck twice in quick succession by Liverpool at the other end inside the final 10 minutes of normal time, with Diaz denied before Andy Robertson miscued a close-range volley.

With fatigue setting in through extra-time on a warm Wembley afternoon, extra-time saw the tempo drop, but the drama cranked up again in the shoot-out – and it was once again the red end celebrating.

The winger had been a standout performer in Liverpool’s Carabao Cup success over Chelsea and was immediately tormenting Chalobah, getting the better of the 22-year-old centre-back four times inside the first quarter of an hour.

It seemed at that stage only a matter of time before a Diaz move delivered the opener for Liverpool but, with wing-back Reece James tucking in to help out his team-mate Chalobah, Chelsea came through the early storm and created good moments of their own for Christian Pulisic and Marcos Alonso.

The match – and potentially Liverpool’s season – took another twist on 33 minutes, when Salah was forced off. He looked relatively comfortable as he walked down the tunnel but there will now inevitably be concerns about the part he can play in Liverpool’s remaining matches.

Team news
Kai Havertz was a surprise omission from the Chelsea squad due to injury, with Romelu Lukaku starting up front, while Timo Werner was injured in the warm up. However Mateo Kovacic won his race to be fit. The Blues were otherwise unchanged from their 3-0 win over Leeds on Wednesday.
Liverpool made five changes from Tuesday’s win at Aston Villa, with Mohamed Salah back in ahead of Diogo Jota, Thiago Alcantarain place of Curtis Jones, Jordan Henderson covering for the injured Fabinho, Ibrahima Konate preferred to Joel Matip and Andy Robertson replacing Kostas Tsimikas.
The second half also began with a flurry of chances – although this time they were for Chelsea, with Alonso dragging a shot wide, Alisson saving sharply from Pulisic, and Alonso then smacking a free-kick against the bar from out-wide.

Liverpool struck back with Robertson unable to bundle in at the back post, Diaz shooting over from the edge of the box, Jota arrowing just off target and Naby Keita making Edouard Mendy work. But still there was no breakthrough.

The teams continued to trade blows, with Pulisic shooting wide and Diaz bending a fine shot over before James stopped a swift Liverpool counter-attack with a combination of good defending and then a foul on Thiago to earn the first booking of the match.

But Liverpool kept on coming and hit both posts in quick succession as the clock ticked down, with Diaz denied after a shuffle and shot from eight yards before Robertson miscued his volley from the other side when he seemed certain to convert. There was still time for Diaz to curl just off target but, for the fourth time this season, 90 minutes wasn’t enough to separate these sides.

There was another blow for Liverpool at the turn around, with Van Dijk subbed off and looking frustrated in the dugout. On the pitch, his centre-back partner Ibrahima Konate took a risk when he floored Hakim Ziyech in the box, although ref Craig Pawson waved play on.

A series of Chelsea set-pieces came to nothing and in the second period of extra-time, with fatigue setting in, chances were again in short supply as penalties loomed.

Tuchel’s decision to sub off sub Ruben Loftus-Cheek for Ross Barkley in the final seconds was intriguing move, given how his Kepa Arrizabalaga switch in February back-fired.

Barkley did score his penalty but the tale had an unhappily familiar ending for Chelsea, who, through the finest of margins, missed out on another trophy, with this loss adding to their FA Cup final defeats to Arsenal and Leicester City in recent years.

Liverpool boss Jurgen Klopp to the BBC: “Outstanding, it was an incredible, intense game against Chelsea – they would have deserved it exactly the same way, like in the Carabao Cup. That’s how small the margins are.

“I couldn’t be more proud of my boys, the shift they put in, how hard they fought, the early changes. I think Virgil is fine, but his muscle was hurt.

“All of these things, missing good chances, overcoming good moments from Chelsea, then having really good moments ourselves…

“Then in the penalty shoot-out, it was nerve-racking, my nails are gone but I really feel for Chelsea. For the second time, 120 minutes and you get nothing, that’s too hard. But for us I’m pretty happy.

Tuchel sad but proud
Chelsea boss Thomas Tuchel: “Like in the last final, in the Carabao Cup, it’s no regrets. I told the team I’m proud.

“We were sure that we would be competitive and make life very difficult for Liverpool. We did it again. We struggled in the first 15 minutes but then we were excellent for the whole match. We got to 0-0 against maybe the best attacking team in the world and we also created a lot of chances. We deserved it, as they deserved it as well, but again we lose on penalties.

“We are very disappointed of course. We are sad but at the same time proud.

“I was sure we would win today. I was sure before and I was sure during the match that momentum was on our side. I was sure until the very last minute but unfortunately I was not right. I have to digest it and keep on going. That’s life in sports.

“We have everything it takes to win trophies, we proved it. We have a Club World Cup and a European Super Cup and I don’t feel sorry this was at the beginning of the season and in winter.

“We were good in Champions League, strong in both domestic cups, we can produce peak performances and we have the mentality in the club to shape the mentality of the players, but Man City and Liverpool have shown you need this on a consistency.”

What’s next?
Liverpool travel to Southampton on Tuesday at 8pm while Chelsea host Leicester on Thursday at 7.45pm. On the final day of the Premier League season, Liverpool host Wolves and Chelsea host Watford on Sunday at 4pm.