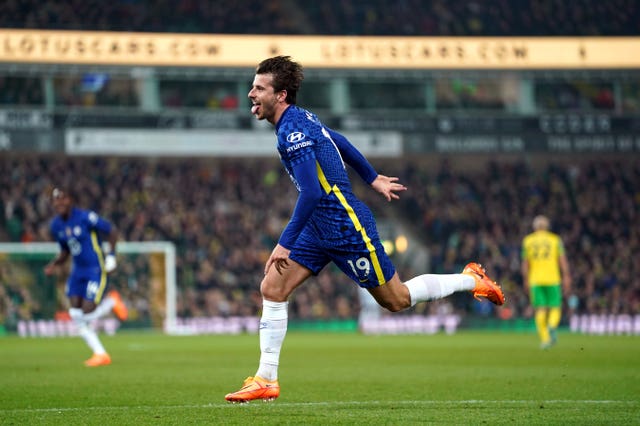 Chelsea overcame the chaos of a turbulent day off the pitch to grind out a 3-1 win at Norwich and stay in the driving seat for Champions League qualification.

The Blues took to the field at Carrow Road hours after learning owner Roman Abramovich had been sanctioned by the UK Government and had his assets frozen.

Boss Thomas Tuchel would have preferred a more comprehensive victory, with Teemu Pukki’s 69th-minute penalty setting up a nervy finale before Havertz’s late strike, but it was a welcome result at the end of another dramatic day for the club, which Abramovich had put up for sale last week amid Russia’s continued invasion of Ukraine.

After a day in which the Champions League holders saw their club shop forced to close, tickets sales suspended and their very future mired in uncertainty, attention turned to matters on the pitch and four changes were made from Saturday’s 4-0 win at Burnley.

Romelu Lukaku remained on the bench, with Timo Werner given a starting role, and it took only three minutes for the opener to arrive.

Two Chelsea academy graduates combined to break the deadlock, with Mount’s corner headed home at the near post by Chalobah to spark celebrations from the away fans.

Chants of support for Abramovich from the visiting supporters had started before kick-off and continued during the early exchanges, with the Chelsea kit still sporting the logo of shirt sponsor ‘Three’, despite the telecommunications company suspending its deal with the club earlier in the day.

It was 2-0 with 14 minutes on the clock when Havertz found Mount inside the area and the England international opened up his body to create space against Ozan Kabak before he curled home.

Tim Krul had thwarted Havertz on two occasions by this point, but the dispirited Norwich faithful were at least able to enjoy a brief break in play when a bird entered the Carrow Road pitch.

No further damage was inflicted on the Premier League’s bottom side before the break and both teams made changes at half-time.

Visiting captain Cesar Azpilicueta was withdrawn, while home boss Dean Smith made a double substitution and ditched wing-backs for a flat back four.

Milot Rashica made an immediate impression with a fine run before he fired over from range, which at least signalled the hosts’ intent at the start of the second period.

The Chelsea supporters were soon back in full voice, chanting for Abramovich and singing “Chelsea get sanctioned everywhere they go”, but the momentum shifted in the 66th minute.

Pierre Lees-Melou raced on to a ball into the area and saw his cross hit the arm of Chalobah. Referee Martin Atkinson was advised by VAR to review the incident on the pitchside monitor and a penalty was awarded.

Norwich’s top-scorer Pukki stepped up and sent Edouard Mendy the wrong way to score for the eighth time this campaign.

Smith’s men were full of belief now and Mendy had to scoop up Kenny McLean’s weak header minutes later.

A yellow for Chalobah further whipped up the home crowd and Tuchel turned to Lukaku and N’Golo Kante in the final exchanges to close out the win.

It was Kante who made his mark with an assist for Havertz to wrap up the points with a fine finish that ensured third-placed Chelsea ended another tumultuous day with one positive result.