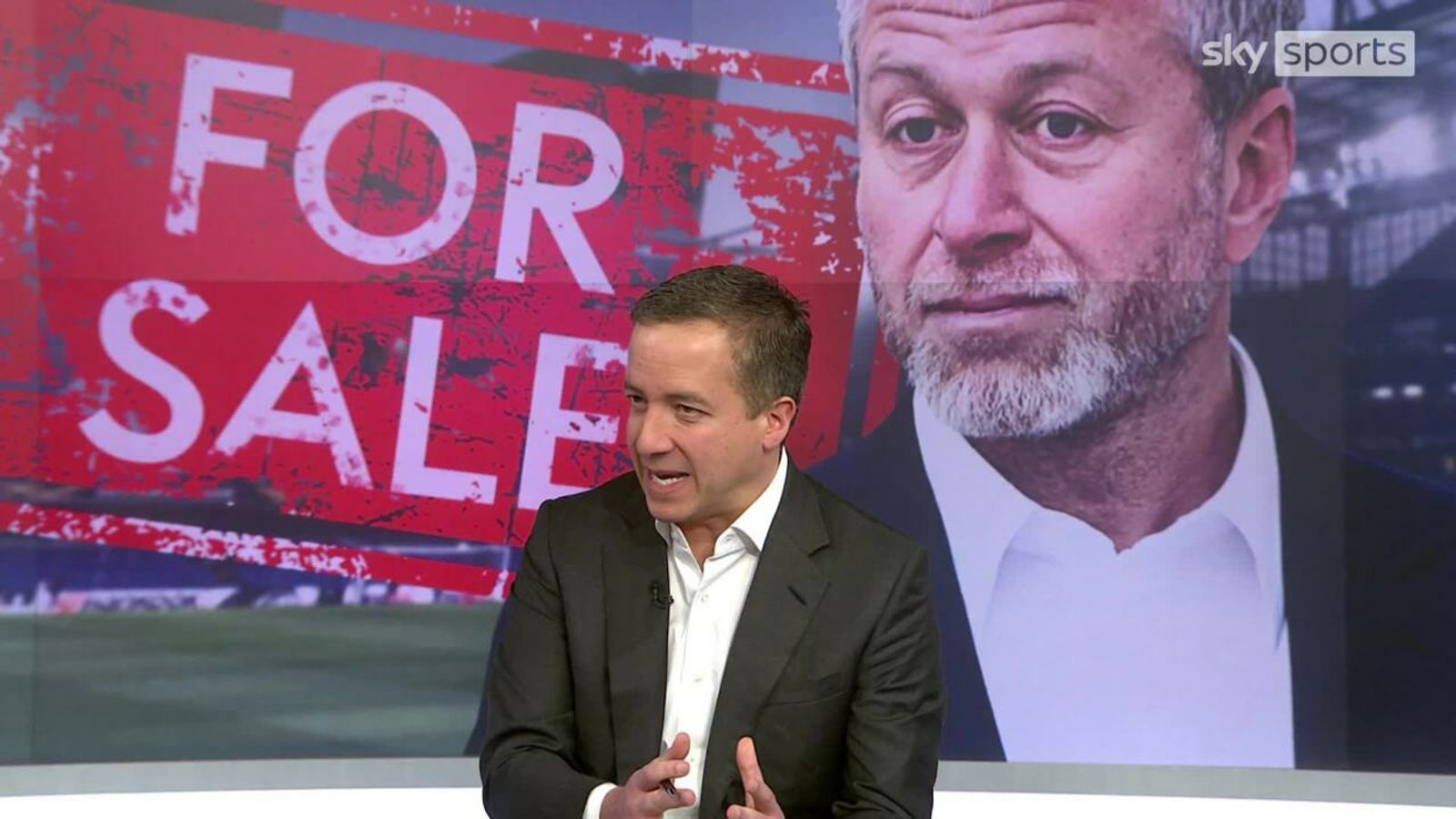 With the sale of Chelsea rumbling on and uncertainty over the runners and riders, Sky Sports News’ Kaveh Solhekol explains exactly what is going on at Stamford Bridge…

What’s the latest situation with Chelsea’s sale?
The shortlist is not complete at the moment. We do know that the consortiums headed by Todd Boehly and Sir Martin Broughton have made the cut, as has the bid by the Ricketts family. Boston Celtics and Atalanta co-owner Stephen Pagliuca has also made the list. But there are still question marks over Nick Candy’s offer – and the process has just dragged on for ages and taken much longer than it should.

It has been complicated by some of the people who were told they weren’t on the shortlist refusing to take no for an answer and fighting to get onto it. There’s even a suggestion some bidders might get together to try to get onto the shortlist, it’s become really, really messy.

Bids which make it onto the shortlist will be given access to Chelsea’s data room. They will be given a password which will allow them to look at all Chelsea’s financial data including player contracts.

They will also have the opportunity to visit the club and meet key personnel such as manager Thomas Tuchel, chairman Bruce Buck and chief executive Guy Laurence.

Will the fan backlash towards the Ricketts family be taken into account?
The shortlist hasn’t even been announced yet and the Ricketts bid is already hugely controversial – and No To The Ricketts has been trending on social media with loads of Chelsea supporters coming out against it.

In the process, it’s not necessarily the biggest bid that’s going to win. It has to be who is perceived to be the right owner going forward in the future.

There’s the controversy about islamophobia and links to Donald Trump, although they say they’ve done nothing wrong and Joe Ricketts, who made those comments, is not involved in the bid.

You have to think if a bid has attracted so much controversy, are people thinking, ‘maybe this is just going to be too complicated?’ And the situation is already complicated. With Roman Abramovich being sanctioned and the war in Ukraine.

So I’m not sure that they want another added layer of controversy. But you have to say, if it just comes down to money and backing then the Ricketts family group have every right to be on the shortlist, because they’re backed by Ken Griffin, who I think is the 47th-richest man in America – and would be about three times richer than Roman Abramovich.

So it’s not just the size of the bid, it’s also what their plans are for the future, and whether they have the finances to keep Chelsea operating at a level they’ve been used to under Roman Abramovich. It’s a complicated situation because so many people are involved in the decision-making process.

The Raine Group are involved, so they’re going to have a say, then Chelsea are involved so Bruce Buck, Marina Granovskaia and the Chelsea board, and you’d have to say Roman Abramovich is not supposed to be involved but all the people running Chelsea at the moment are people who were appointed by him and are close to him.

You would think he would be having some kind of input – and then the Government are going to have to get involved once a preferred bidder has been identified.

One thing that’s a little bit worrying is that all the leading contenders are consortiums, they’re not one person who’s got the money to buy Chelsea.

And you never know what’s going to happen in the future with a consortium, who’s going to agree with who, who’s going to fall out with who. Chelsea supporters need more transparency over where the money’s coming from, whose money is it, is this money that’s being borrowed from banks and if it’s been borrowed money, who is going to repay it?

Is the club going to have to be paying it in the future, rather than the people involved in these consortiums? And some of these consortiums haven’t been particularly transparent about where the money is coming from.

Can Chelsea hurry along the process to get things sorted more quickly?
I think everybody wants this to be done as quickly as possible, and most people would say that this initial phase has taken too long – but that doesn’t particularly bode well for what’s going to happen next.

This is turning out to be the most complicated takeover ever. The Newcastle one was very, very complicated, and the government got involved in that as well. But with this one, it’s the fact that the owner is sanctioned, the sale is being conducted from New York, there’s several different people interested and so many people who don’t actually have the money to buy Chelsea are claiming to be interested as well.

People were saying it could be done quickly. From Chelsea’s point of view, of course, they want it done quickly. But as this drags on longer and longer, you begin to get the feeling that it’s not going to be done as quickly as people want.

That’s really worrying from Chelsea’s point of view because they’re operating under the terms of this special licence that has been placed on them by the government, money’s tight, their credit cards were frozen, the government have said that Roman Abramovich’s holding company can release up to £30m to keep the club going, but how long is that money going to last?

We know Chelsea’s wage bill is about £28m a month. We’re getting close to the end of the season now and if this is not resolved, what impact is that going to have, on the players, on the future of everybody at the club?

How quickly could this possibly be sewn up?
The earliest this will be sorted out would be the end of April. The out-of-contract players are free to speak to foreign clubs – and we know for a fact that they have been speaking to foreign clubs.

I wouldn’t be too hopeful about any of them staying at Chelsea, because we know that Chelsea are not in a position to be able to be holding contract talks with any players at the moment. Foreign clubs, Barcelona, Real Madrid, Juventus, PSG are.

So those players will have some very lucrative offers being made to them. And maybe they’ll just think there’s so much uncertainty at Chelsea at the moment, and it makes it more likely they’re going to leave the longer this drags on.

At this point, is it going to have an impact on Chelsea’s summer plans?
Definitely. Is Marina Granovskaia going to be there? She’s the one overseeing all the transfer business. She’s the one who’s in charge of negotiating all the contracts – I’m not sure she’s going to stay. This is the kind of time of year where Chelsea would be working hard behind the scenes before the window opens, working out who they’re going to try and sell, who was going to leave. All of those plans have been put on hold for the time being.

The only thing I would say is that Chelsea have such a fantastic squad anyway, but obviously you would have expected them to have done some business this summer. Everything has just been put on hold. A few months ago we were talking about the fact that they were in for Erling Haaland. It’s just not happening at the moment and I can’t really see any of these consortiums coming in quickly, sorting things out, taking over, backing Thomas Tuchel and saying, ‘here you go, here’s another £100m to buy another striker’.

They’re not allowed to do any transfer business at the moment. They’re not allowed to offer contracts. They’re not allowed to be talking to players about contracts or offering new contracts. From an agent’s point of view, an agent is paid to look after his player. I’m not sure any agents at the moment would be saying to their clients, as far as Chelsea are concerned, wait and see. It’s not a stable situation. Until we’ve got some more information about what the future is going to look like it’s difficult to come out and say, ‘I want to stay at Chelsea’ or ‘I want to sign for Chelsea’. From Chelsea’s point of view the situation needs to be sorted out as soon as possible.

Could more concessions be made on tickets under the club’s licence?
What the Chelsea supporters are particularly unhappy with is that they can’t buy tickets for Premier League games, which a lot of Chelsea supporters think is just unfair and illogical.

I don’t think Chelsea have given up, they’re still trying to get the government to let them sell tickets for their own fans for Premier League games at Stamford Bridge, so I think I think there could be some more developments. It’s just an ongoing dialogue between the government and Chelsea.

I think it was very, very significant that effectively Roman Abramovich was able to put in another £30m. That was sort of hidden away in the amended licence the government released the other night. A lot of people would ask questions about whether that is right because Abramovich is supposed to be sanctioned, his assets are supposed to be frozen. I can see both sides of the story.

I understand Chelsea supporters saying, if you’re going to punish anyone punish the owner don’t punish us. And Chelsea have actually said that they don’t even want the money from selling tickets.