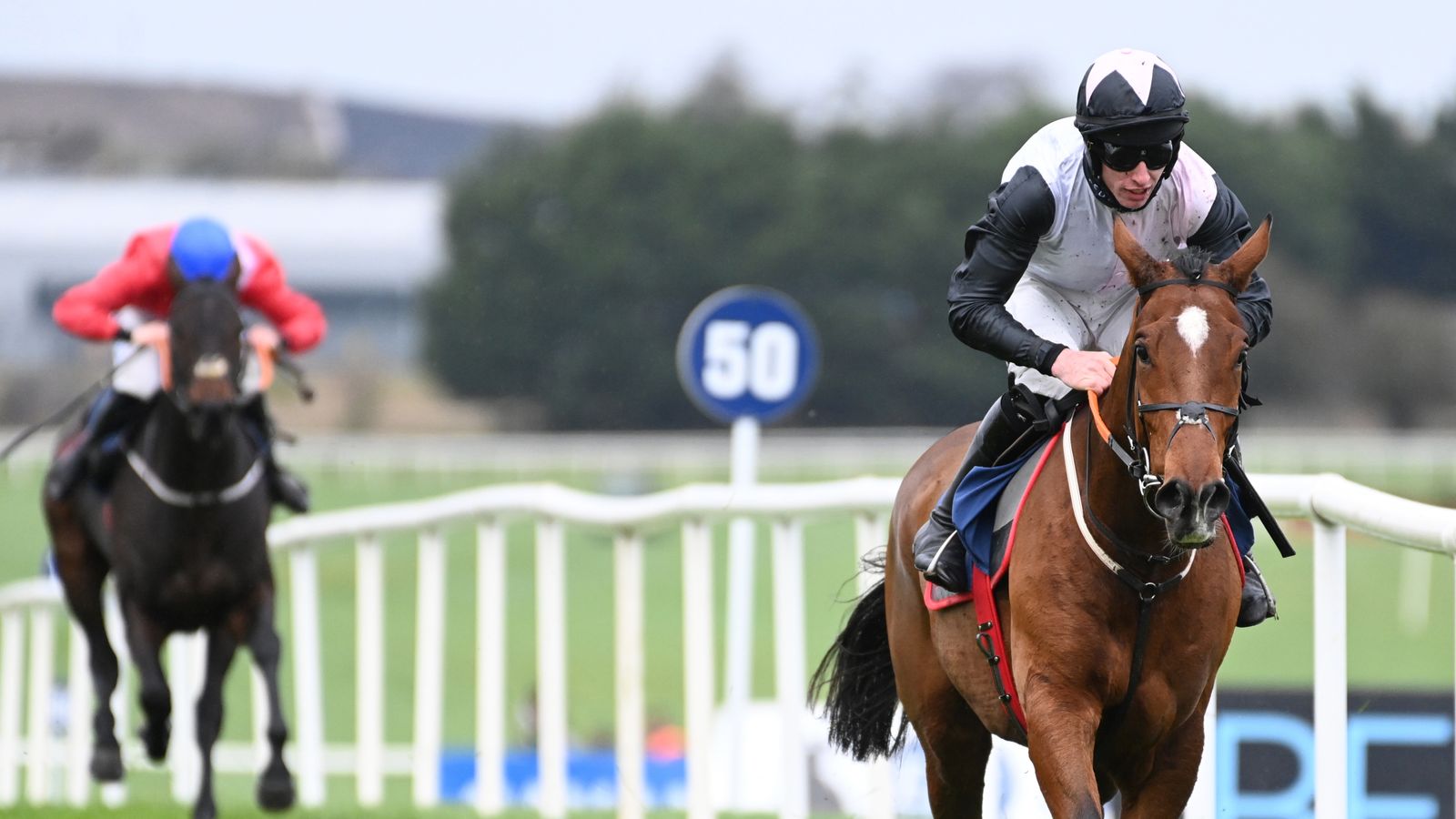 Top tipster Simon Rowlands has four bets online for the opening day of the Cheltenham Festival on Tuesday, including an each-way selection in the Champion Hurdle.

The question of what is the ideal preparation for the Cheltenham Festival is usually confined to the horses, but I find myself wondering whether being battle-hardened or fresh as a daisy is best for those of us tasked with analysing the event also.

I was unavailable for this column in recent weeks and managed to avoid being on any Preview panels (due to nobody asking me) so have something of a query against my forecasting fitness.

For what it’s worth, my non-public tipping has been pretty dire during that time, which is a result in one sense (the losers cost no one other than me) but perhaps not in another.

Jump racing’s “Olympics” gets underway on Tuesday with a typically sensational card, featuring the Unibet Champion Hurdle at 3.30, supported by other Grade Ones in the Sky Bet Supreme Novices’ Hurdle (1.30), the Sporting Life Arkle Chase (2.10), and the Mares’ Hurdle (4.10), plus three other contests that are not to be missed.

The Champion Hurdle revolves around the unbeaten Honeysuckle, who was brilliant in victory 12 months ago but merely good in both her starts this term.

She beat Ronald Pump (defeated in three hurdles and a chase since) on the first of them and Zanahiyr in the Irish Champion Hurdle on the second. 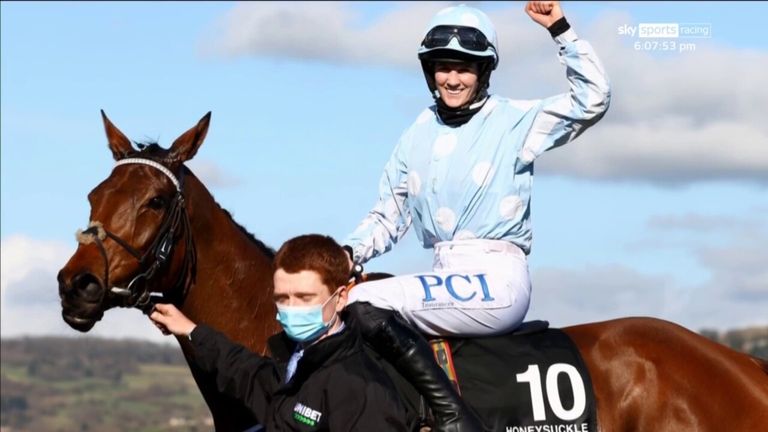 Trainer Henry de Bromhead reveals how his unbeaten Champion Hurdle star Honeysuckle can be a real handful at home, but is easily won over with some carrots!

Zanahiyr is no mug, but he made an appalling error at the first at Leopardstown, and there is no disguising the fact that neither Honeysuckle’s overall time nor her late sectionals were top drawer that day.

The 2/1 about Honeysuckle a year ago looked something of a gift but odds on about her against potentially better opposition now does not.

Appreciate It is the one the market fancies most to upset the applecart, but he has been absent for even longer than I have – since this day last year, in fact – and his Supreme win, awesome though it was, was not as good on the clock or on the form book as Honeysuckle’s Champion. He has something to prove. 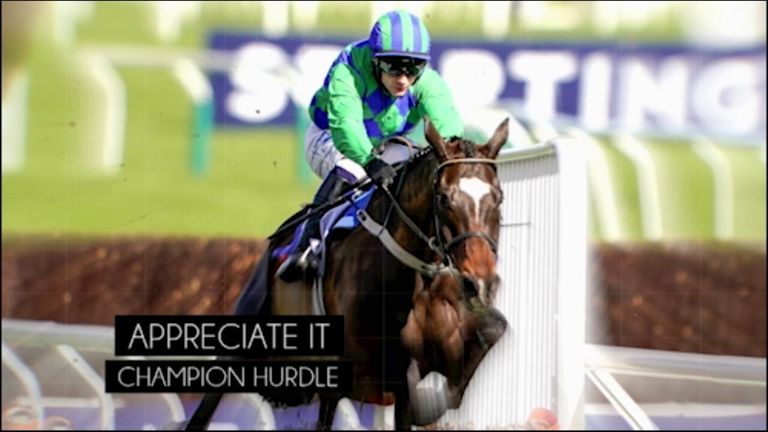 Trainer Willie Mullins isn’t worried about the lack of a run this season for Appreciate It as he bids to defeat Honeysuckle in the Champion Hurdle.

That is also the case with Teahupoo, but crucially he is a much bigger price than either of the aforementioned.

He looked good but not great until smashing up decent rivals in the Red Mills Trial Hurdle last time, an effort that was well-nigh Champion Hurdle class on the face of it.

The ground at Gowran Park was heavy that day, and rain or watering at Cheltenham would not go amiss, but Teahupoo also smashed up Quilixios at Naas in November on less testing at a time when Quilixios was still a force to be reckoned with.

Teahupoo has been beaten only once in seven starts and all in all looks over-priced.

The form of the British representatives is a rung or two below that of the Irish. Northern pin-up Tommy’s Oscar would have every chance of emerging best in a “betting without the Irish” market.

One other thing to say about the Champion Hurdle is that it is mathematically a good race for an each-way bet, with a short-priced favourite and 10 runners.

Kilcruit can get Mullins off to a flyer

By the time the Champion Hurdle comes to be run, the winner of the Supreme will be safely back in his box with connections likely dreaming of success in the 2023 Champion. I am hoping that horse will be Kilcruit.

He is slightly behind his stable companion Dysart Dynamo on my figures, but level with Constitution Hill and ahead of the others. The market is still placing too much store by his two reversals early on and not enough by his fast time all-the-way smash-up at Punchestown on his latest appearance.

Let us not forget that Kilcruit was top-notch in bumpers last season, unlucky not to beat Sir Gerhard (odds on to win here on Wednesday) and gaining his revenge on that rival at Punchestown.

I thought Kilcruit would be a two-and-a-half-miler (and that Sir Gerhard would not be), but was wrong. Less surprising is that Kilcruit could be about to become very good indeed over hurdles.

I am heavily invested in Edwardstone in the Arkle, but that was at a double-figure price and I can sit out this race now that he is favourite. He has his conditions and the likelihood of a strong pace, but has several snapping at his heels come the day.

Floueur fancied if he puts it all together

Britain (not England, please not England) should pick up races through the week, but I am deserting it for my other two bets, also.

Floueur, as an attractively weighted novice unexposed at staying trips, can go well in the Ultima Handicap Chase (2.50). He would have finished closer to Death Duty last time but for a mistake, though his tendency to miss the odd one out is why I reckon he is a win bet rather than an each-way one.

Irish-trained horses have just two Welsh-trained rivals for a sparse Ukraine Appeal National Hunt Chase (5.30). Run Wild Fred has the best form and fewer doubts regarding stamina than most, and, while he may have one or two quirks, he should arguably be nearer 6/4 in this company. That makes him a bet.

I can see no great edge in the Mares’ Hurdle, in which Telmesomethinggirl is a worthy favourite. My fancies for the Boodles Juvenile Handicap Hurdle (4.50) have failed to make the cut, and I don’t intend to be siding with the short-priced Gaelic Warrior even though he looks to have been let in lightly by a good few pounds on his classy French form.