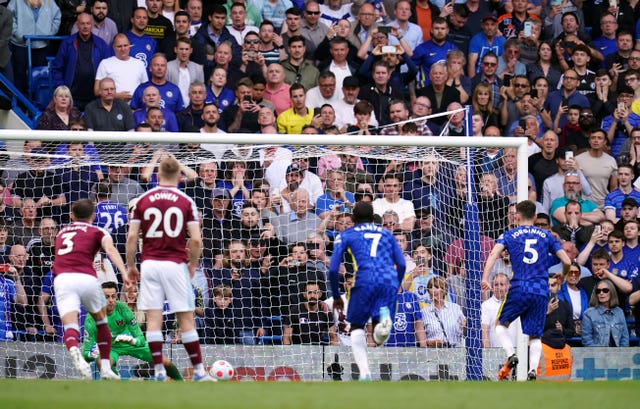 The USA forward’s crisp finish also offered Jorginho a major reprieve, with the Italy midfielder having missed a penalty with just four minutes left on the clock in an incident that also saw West Ham reduced to 10 men.

Craig Dawson was sent off for hauling back Romelu Lukaku in the box, gifting Chelsea the perfect chance to turn a dispiriting performance into a much-needed win.

Jorginho stepped up and delivered his trademark hop, skip and side-footed penalty effort – only to see Lukasz Fabianski guess correctly and pull off a comfortable save.

But just when another penalty failure looked set to haunt the 30-year-old at Stamford Bridge, up popped Pulisic with a vital rescue act.

A win to keep Chelsea solidly in third place in the Premier League table, but given its dramatic nature also a result that ought to boost some weary bodies and minds in west London.

Manager Thomas Tuchel admitted on Friday that his players are “fragile”, tired and running short of ideas on how to fix their ailing home form.

A dismal first half devoid of any invention or quality did absolutely nothing to disabuse anyone in the ground of those notions.

The much-changed Hammers were content to sit in two banks of four and invite Chelsea to break down their regimented set-up.

The Blues had no answers before the break, and turned around as flat as they were frustrated.

The hosts finally upped the ante and the tempo after the interval, with a deflection helping Fabianski to keep out N’Golo Kante’s strike.

Trevoh Chalobah’s 20-yard drive forced Fabianski into another save, but still Chelsea failed to fire.

The Blues’ malaise was encapsulated by Thiago Silva powering between West Ham’s lines and picking his spot with a shot – only to see team-mate Timo Werner deflect his effort wide. Werner was flagged for offside just for good measure.

Dawson’s fine block thwarted Mason Mount and Werner could only blast wide after collecting the loose ball in the six-yard box.

Werner was then presented with the chance of the match as the ball dropped to him just eight yards out, but the Germany forward could not connect properly at full stretch, allowing Fabianski a straightforward save.

Pulisic, Lukaku and Hakim Ziyech replaced Ruben Loftus-Cheek, Kai Havertz and Werner for the final 15 minutes as the Blues went for broke.

The triple substitution paid off in the end, but not without further drama.

Lukaku thought he had produced a vital act by drawing the penalty from Dawson, only for Jorginho – so often so secure from the spot – to miss again.

Pulisic stepped into the break as the super sub instead then, making no mistake when racing onto the ball with the goal at his mercy.