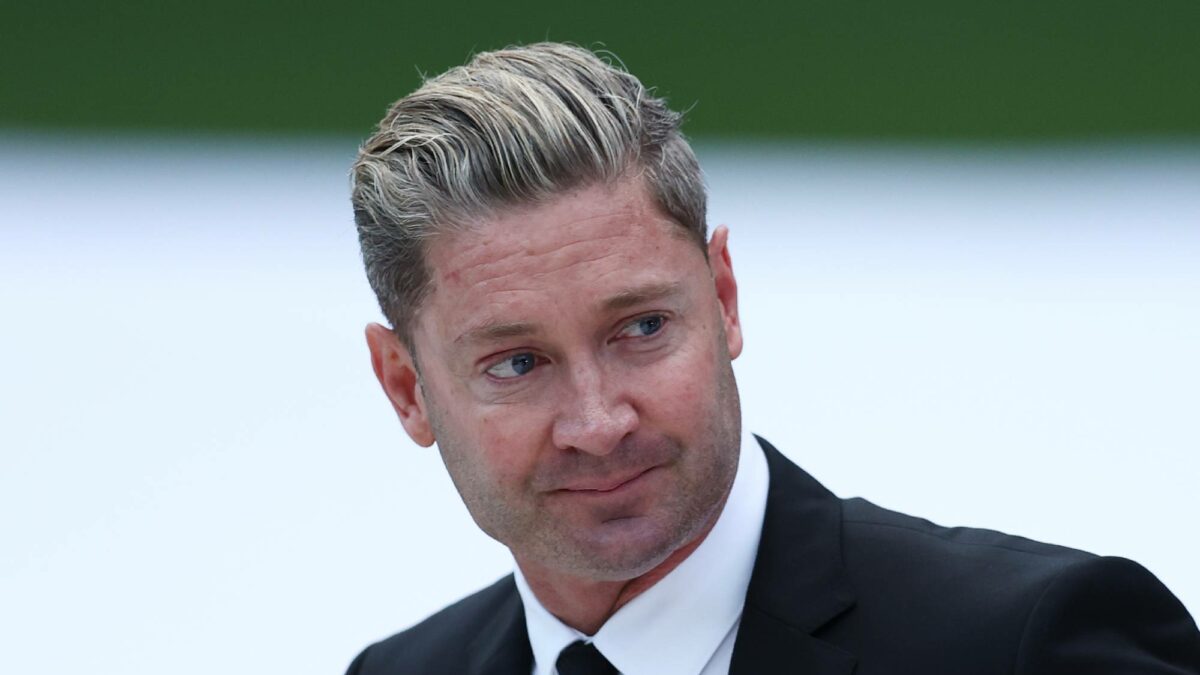 Michael Clarke has criticised Australia’s selectors and the team’s preparations for India as he opted to stick with cricket on his return to breakfast radio.

The subject of headlines for the past week after his public spat with girlfriend Jade Yarbrough, Clarke chose not to address the matter on the show’s return for the year.

With radio bosses expecting Clarke to talk on the matter when the incident broke last week, Big Sports Breakfast host Gerard Middleton was the only member to acknowledge it on Monday. Middleton made the point that the issue was a private matter, and the show wanted to move on from it.

“It is a private matter that Clarkey has been dealing with,” Middleton said early in the show. “A very, very private matter that unfortunately was made public. There are a lot of factors at play here, and Clarkey made his statement last week. We’re moving on on the Big Sports Breakfast.”

Middleton also said the show had received a lot of text messages “supporting” Clarke, while others had been “sticking the boot in”.

In response, Clarke only entertained jokes about his problematic right hamstring after it was also injured in the argument with Yarbrough and her brother-in-law Karl Stefanovic.

Clarke and Yarbrough have both been fined by Queensland Police for public nuisance, after the expletive-laden argument.

The issue is also believed to have placed Clarke’s commentary contract with the BCCI at risk, with the former Australia Test captain revealing on Monday he had been contacted to commentate on Pakistan’s T20 league.

Aside from that, Clarke kept his opinions to cricket.

He claimed selectors would be “kicking themselves” for overlooking Steve Smith for the majority of Australia’s T20 World Cup disappointment, after his back-to-back BBL tons.

“The Australian selectors missed a massive trick with Smithy in the T20 World Cup,” Clarke said.

“They were set on Mitch Marsh batting at No.3. (Aaron) Finch tried batting No.4, Cameron Green had a go.

“Smithy gets back in the BBL and hits two hundreds in a row.

“He could’ve batted anywhere, he didn’t have to bat at No.3.

The 41-year-old also labelled it ridiculous Australia were not playing a tour match ahead of the first Test in India on February 9, with the team to rely on net and centre-wicket training.

Were Heat dudded by waist-high calls in BBL thriller

Brisbane’s late season surge towards the Big Bash finals has continued with last over hero Spencer Johnson securing a thrilling four-run victory over Melbourne Stars at the Gabba.

Left-arm paceman Johnson bowled the final over of the match for the second time in as many games, after keeping Hobart’s Tim David quiet on Friday night in a sensational finish.

The Stars needed 14 off the last but Johnson contained Marcus Stoinis (36no) and Hilton Cartwright (33no) with nerves of steel.

The Heat’s win was set up by an unbroken 133-run stand by wicketkeeper Jimmy Peirson (57no off 43 balls) and English import Sam Hain (73no off 41) who lifted the home side to 4-188 batting first.

The last-placed Stars needed 44 with 14 deliveries to go before Cartwright and Stoinis were both caught off full tosses that were ruled over the waist but were line-ball decisions that divided opinion among fans and commentators.

“I was quite nervous with that one. The other night I had a bit more to play with,” Johnson said.

“Uz (captain Usman Khawaja) has backed me in. He has been great standing at mid-off and keeping me calm.

“Talking to a few of my close mates after the other night they said, ‘Geez, if you can so that to David you can do that to anyone’. That gives me a lot of confidence to do what I just did.”

The Heat, on 13 points, can now wrap up a top-five finals position with a win over Hobart Hurricanes in Launceston on Wednesday.

The table is that tight the Heat could finish as high as third or still miss the finals, depending on results.

Stars opener Tom Rogers smashed 41 off 20 balls to get the visitors moving quickly in pursuit of the Heat’s total.

Earlier, Hain and Peirson came together at 4-55 in the seventh over.

Peirson, playing his 101st BBL game for Brisbane, was pugnacious square of the wicket while Hain unfurled a vast range of shots, including a reverse ramp for six.

England international Luke Wood came out breathing fire and brimstone in a fearsome opening spell for the Stars.

He blasted out Josh Brown (four) and Marnus Labuschagne (one) in his opening two overs. Matt Renshaw ran himself out for seven and Khawaja (24) departed before Hain and Peirson took over.

Perth Scorchers paceman Matt Kelly was struck flush on the face in a freak fielding mishap as his team secured top spot on the BBL ladder with a topsy-turvy 10-run victory over the Melbourne Renegades.

The Scorchers posted 5-212 at Optus Stadium on Sunday on the back of strong contributions from Cameron Bancroft (95no off 50 balls) and Stephen Eskinazi (54 off 29 balls).

In reply, the Renegades were in all sorts of trouble, needing 68 off the last 18 balls to secure victory in front of 32,259 fans.

But a remarkable blitzkrieg from Aaron Finch (76no off 35 balls) and some horror dropped catches from the Scorchers reduced the equation to 37 needed off 12 balls.

AJ Tye (1-63 off four overs) suffered the most pain, with Finch helping take 31 runs off the star paceman’s final over.

However, Finch struggled to regain the strike for the crucial final 12 balls of the match, enabling the Scorchers to sneak home.

The Renegades finished at 5-202, with opener Shaun Marsh scoring 54 off 34 balls in a successful return from a hamstring injury.

The result means Perth can’t be displaced from the top of the ladder, and they will host the second-placed Sydney Sixers in “The Qualifier” next Saturday.

The winner of that match will earn direct entry to the grand final.

The Renegades remain in fourth spot, with the top five teams making the finals.

Kelly is in doubt for the start of the finals after being struck in the face by the ball while attempting to collect a return throw.

The 28-year-old was at the non-striker’s end when the throw from Nick Hobson deflected off Finch’s bat and straight into Kelly’s face.

A bloodied Kelly was subbed out of the game with concussion.

“It was a freak accident, one of those things,” Finch said. “I feel shocking for it … you don’t want to see anyone hurt.”

Scorchers coach Adam Voges said Kelly was feeling better after the match. “He’s ok, he’s up and about,” Voges said.  “He got a little cut on his jaw.”

Perth’s four-over Power Play of 0-62 was the best of any team this season, with the Renegades made to pay dearly for their wayward start with the ball.

Renegades paceman David Moody was the biggest culprit, with his spell lasting just one legal delivery. The 27-year-old struck Bancroft in the upper ribs with a wild 143.8km/h full toss early in the second over of the match.

Bancroft was hurt in the incident but was able to scamper through for a single before taking time to recover from the hit.

A wide came next ball, before Moody unleashed yet another full toss above waist height when Eskinazi was attempting a scoop shot.

The second beamer meant Moody was not allowed to continue bowling under the laws of the game, forcing captain Finch into a bowling reshuffle.