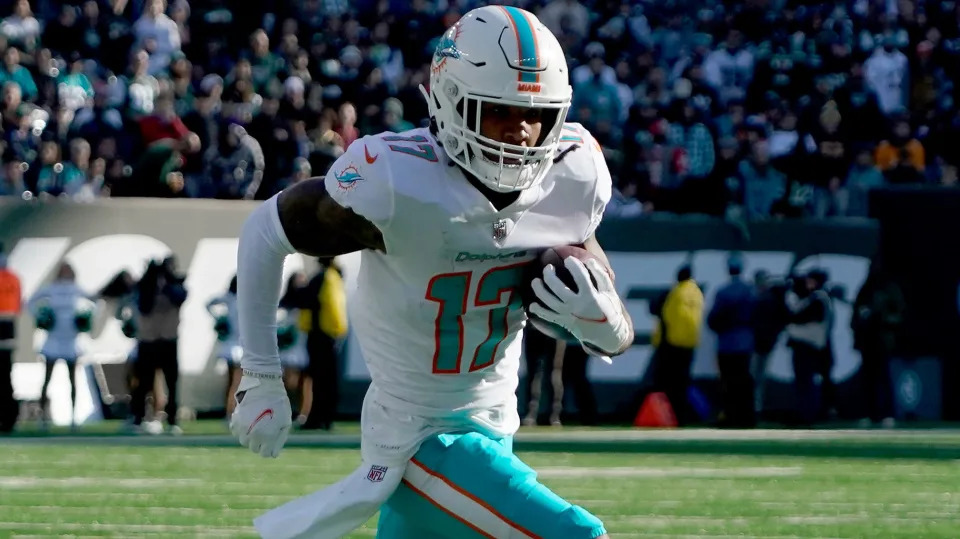 The Saints were down both QB Taysom Hill and QB Trevor Siemian, who were victims of the reserve/COVID-19 list. In their absence, the team started QB Ian Book under center against the Miami Dolphins. Book had some positives on his collegiate prospect profile, most notably that his 84 QBR ranked in the 85th percentile among all QB prospects and his athleticism (4.7, 40-yard dash, 80th percentile). The Saints, however, had no intention to play football. An uninspired game plan was called by head coach Sean Payton, resulting in a lackluster 20-3 loss by the Saints. The Saints’ defense has punched well above their weight class this year and it’s a shame to see the lack of creativity on offense. Hopefully, the Saints can make some noise next season.

The Dolphins on the other hand are a team ascendent. The defense was firing on all cylinders, opening the scoring with an easy pick-six. The defense also picked off Book late in the fourth quarter, which ended the game. WR Jaylen Waddle returned from the reserve/COVID-19 list and had a strong outing, posting 10-92-1 on 12 targets against the Saints. Waddle has mostly been targeted on short routes this year, but he did flash his ability as an adept receiver in all quadrants of the field. I’ll be genuinely interested in tracking Waddle’s ADP next season as I’ll be trying to draft him as much as possible.

I try to not discuss old games in this space, but there are a few interesting news items from the Niners/Titans Thursday Night Football game. For starters, the subheading for this section gives it away. QB Jimmy Garoppolo was initially believed to have suffered a right thumb sprain in the Niners’ 20-17 loss to the Titans. Further testing revealed that Garoppolo had torn his UCL and fractured a bone in his right hand. I may not be a doctor, but I think that suffering a major injury in your throwing hand ostensibly throws a wrench into the works. Garoppolo’s rest of season outlook is currently unclear, but it does pave the way for rookie QB Trey Lance to start. If somehow you’ve made it to Week 17, you need to start Lance. The man is the personification of the Konami code for quarterbacks. Back in Week 5, Lance had 16 carries for 89 yards and zero scores. He also completed 15 of his 29 pass attempts for 192 scoreless yards. Lance’s upside comes from his ridiculous rushing ability. Sadly, Lance starting means that expectations for the Niners’ pass catchers should be tempered.

On the Titans’ side of the ball, A.J. Brown reminded the world that he exists and is awesome. Brown saw a career-high 16 targets and caught 11 of them for 145 yards and a score. Sadly, this year will be a disappointment for Brown but he flashed the upside we were all hoping to capitalize on before the season. The Titans placed Julio Jones on the reserve/COVID-19 list, which should open up a handful of targets for Brown. Hopefully, we’ll get to see him pick right up where he left off on Thursday night against the Dolphins this week.

The App is Back! Don’t forget to download the NBC Sports EDGE app to receive real-time player news, mobile alerts and track your favorite players. Plus, now you can check out articles and player cards. Get it here!

I hate that I’m running it back with this feature, but there are quite a few important COVID-19 situations to monitor before Week 17.

For the Lions, the team activated QB Jared Goff from the reserve/COVID-19 list. Goff has been more than serviceable this season as a streaming superflex play. The Lions did place WR Josh Reynolds on the reserve/COVID-19 list. With Reynolds possibly sidelined for Week 17, it’s wheels up for WR Amon-Ra St. Brown. St. Brown has done well with both Goff and Tim Boyle under center and Reynolds’ absence opens up more targets for the rookie receiver. St. Brown should dominate the Seahawks’ lowly corners this weekend.

The Tampa Bay Buccaneers will possibly be without the services of WR Mike Evans this week. Evans was placed on the COVID-19 list earlier yesterday and his status for Week 17 is in doubt. Given that he’s currently dealing with a hamstring strain, my best guess is that Evans misses the week. This leaves WR Antonio Brown and TE Rob Gronkowski as QB Tom Brady’s primary pass catchers against the New York Jets this weekend. Note that the team activated WR Breshad Perriman yesterday, but he’s well off the fantasy radar.

Houston Texans RB David Johnson was placed on the COVID-19 list yesterday. Johnson’s absence due to COVID-19 in Week 14 was related to a false positive, but it looks like the running back might be positive for real this time. I doubt anyone was trusting Johnson as a start this week, but he’s quite likely out this week against the Niners.

The Jacksonville Jaguars placed TE Dan Arnold, TE Chris Manhertz, TE Luke Farrell, and a slew of other players on the reserve/COVID-19 list. The outbreak is something to monitor in case other players test positive over the course of the week. TE James O’Shaughnessy and Jacob Hollister are the only two tight ends who are currently not on the list. O’Shaughnessy could be a viable dart throw at the position for the truly desperate.

The Los Angeles Chargers activated RB Austin Ekeler from the reserve/COVID-19 list today. RB Justin Jackson filled in quite well for Ekeler over the weekend, posting 162 total scrimmage yards and two touchdowns on 19 touches. I expect that Ekeler will get the bulk of the workload now that he’s back. Keep an eye out for WR Mike Williams’ status as well as he could potentially return this week.

The Cleveland Browns activated RB Kareem Hunt from the COVID-19 list along with a slew of other players. Although the team activated Hunt, his status remains uncertain. Hunt missed Week 15 with an ankle injury and head coach Kevin Stefanski noted that the team would’ve held the running back out this week. If Hunt does see some run this weekend, it’ll be difficult to trust him given his iffy health status.

The New York Jets placed TE Tyler Kroft on the reserve/COVID-19 list. He’s not a viable fantasy play even if he’s cleared to play this weekend.

Eagles running back Miles Sanders broke his hand against the Giants and will not play this weekend. It’s quite likely that he’s out for the rest of the regular season. Sanders will not be placed on injured reserve and it’s quite likely that the team is hoping to get him healthy in case they make the post-season. Additionally, RB Jordan Howard suffered a stinger against the Giants and his Week 17 status is in doubt. It’s quite possible that Howard is cleared to play this weekend against the lowly Washington Football Team, but I’d expect to see more of Boston Scott and/or Kenneth Gainwell this weekend.

Chiefs running back Clyde Edwards-Helaire suffered a collarbone injury and it sounds like he’s going to be held out for the rest of the regular season. Until Edwards-Helaire returns, Darrel “The Mentor” Williams will continue to handle the bulk of the touches for the Chiefs. Williams averaged 19 touches in the five-game stretch without Edwards-Helaire and he’s shaping up to be a strong play against the Bengals this weekend.