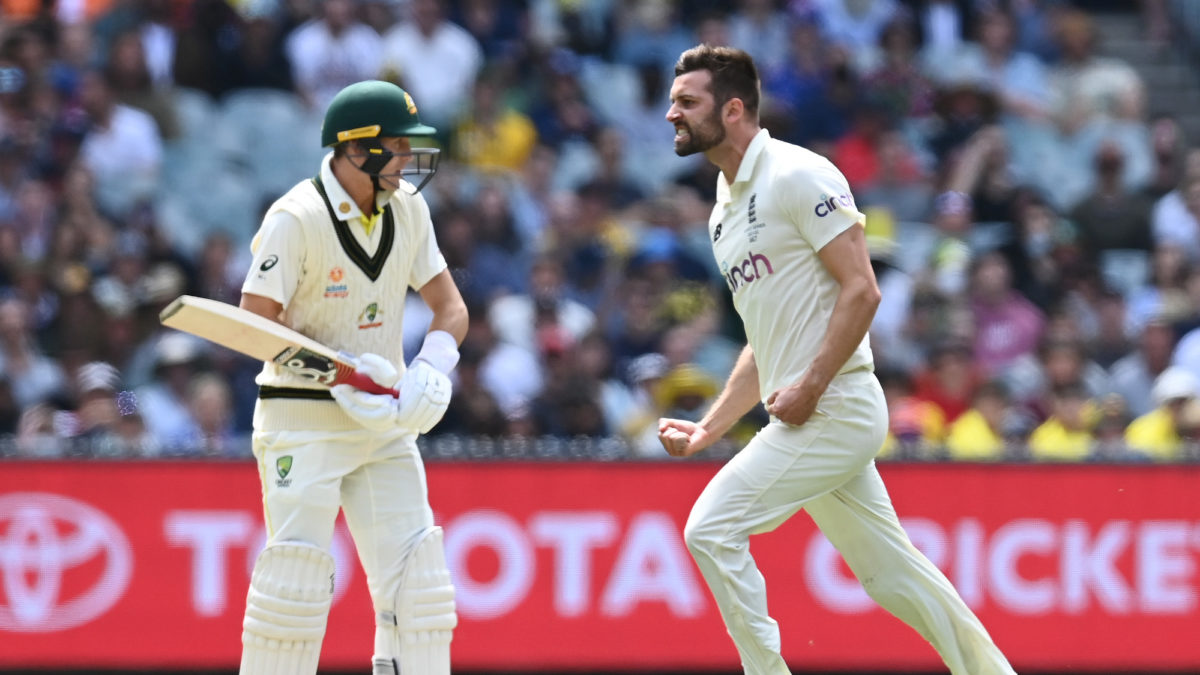 Mitchell Starc’s opening burst to run through England’s top order late on day two of the Boxing Day Test was a sight to behold.

The Australian left-arm quick, having come into the series fighting for his spot in the team amid a barrage of criticism, was nigh on unplayable, removing newcomer Zak Crawley and rock Dawid Malan in successive deliveries to have a raucous MCG crowd baying for blood.

Remarkably, his hat-trick ball was arguably the best of the three; Joe Root simply had no chance of getting bat on a ball that shaped in before seaming away. The movement was such that the Aussie slips cordon went up in appeal, despite the England captain missing the ball by a considerable distance.

Hat-trick balls don’t get much closer than that! ????

Mitch Starc on fire and the MCG has erupted! #Ashes pic.twitter.com/lVniO4V0k1

The show of brilliance was enough for highly regarded cricket coach Trent Woodhill to label Starc ‘the equal of any fast bowler Australia has ever produced’.

Mitchell Starc is a bloody good cricketer. The equal of any FAST bowler Australia has ever produced. Won it all and a great bloke to boot. #AUSvENG

Starc’s bowling heroics came after yet another classy display with the bat, making 24 runs from number ten as the Aussie tail ensured an 82-run first innings lead.

Usually a clean striker, the left-hander restrained his attacking instincts to help drag the innings out, hitting just one boundary in a 37-ball stay at the crease. He added 34 with Pat Cummins and a further 14 with debutant Scott Boland, to frustrate the England attack as much as any of the first-choice batters had done earlier in the day.

Starc’s quality innings lifted his series average to 58.5 – behind only teammates Travis Head and David Warner, and more than 11 runs clear of England’s best, Root.

Even more damningly, his average since January 2019 rose to 34.9 – better than six of England’s top seven for this Test in that time period, with Root the sole exception.

Just as good but lacking the luck was captain Cummins, who once again proved lethal with the new ball, as he did on day one.

Whether he chooses to retain himself in the order for the Sydney Test, or cede it to Josh Hazlewood should he return, will make for a fascinating decision.

With just one five-wicket haul, Jimmy Anderson has seldom dominated on Australian shores to the extent he has overseas.

But his scintillating bowling on day two of the Boxing Day Test was as good as any he has bowled in his storied career.

The 39-year old bowled a phenomenal six-over spell as the Aussies began to struggle in the first session, finishing with the figures of 6-5-1-1.

The one run? From the very first ball of his spell, an inside edge from Steve Smith that missed the stumps by a whisker.

Probably can’t call that one a drop! Anderson getting the ball moving. #Ashes pic.twitter.com/nXsEeDDgjs

The ageless 39-year old would get his revenge later, Smith chopping on to leave Australia precariously placed at 4-110.

Anderson would add the scalp of Marcus Harris to his tally later on, the opener edging to Root again for 76. His fourth would come as captain Pat Cummins skied an attempted pull shot to Haseeb Hameed at point.

We are witnessing sheer greatness in Jimmy Anderson .. Enjoy it whilst it lasts as I am not sure English game will see another one like him .. #Ashes

Return to form for Harris not all it seemed

On face value, it was a desperately needed 76 from under-fire opener Marcus Harris at the MCG.

With few other Australians stepping up with the bat in a dominant first two sessions from England, the left-hander looked assured on his home ground of the MCG, reaching his first Test half-century since January 2019.

It’s an innings that should secure Harris his spot for the final two Tests of the Ashes series, but according to cricket analyst Ben Jones, the score should be taken with a grain of salt.

Wicketkeeper Jos Buttler missed the chance to stump Harris on 63, when he couldn’t glove a ball fired down the leg side by spinner Jack Leach. The Victorian also successfully overturned an LBW decision on 36, when the DRS showed he had got a faint inside edge.

After the latter, Harris was heard to remark ‘Hot Spot’s f—ing hopeless’, with the technology failing to show any mark on Harris’ bat. It fell to Snicko to confirm the edge.

“20 play and misses for Marcus Harris, a missed stumping, and an overturned LBW,” Jones wrote on Twitter.

“Not sure that should be changing Australia’s opinion of Harris too much.”

20 play and misses for Marcus Harris, a missed stumping, and an overturned LBW (yeah, I know, but) – not sure that should be changing Australia’s opinion of Harris too much

“He just had a little prelim movement – sort of shuffled across, almost into line with middle and off stump,” Katich said.

“Facing someone like Ollie Robinson, who nicked him off at the Gabba in the first Test; he’s probably realised that he’s going to try and go across him and seam the ball away, which he’s done most of the series.

“As a left-hander, you’ve got to obviously try and cover that off stump and know where it is so that you can either attack on the stumps, or let balls go once they’re outside your eyeliner.”

‘Not got their mojo’: Vaughan slams England’s muted celebrations

A hectic morning for England that saw them confined to their hotel after a COVID case was detected among the touring party didn’t stop them getting slammed early on day two.

It wasn’t even for making a mistake, either; rather, it was their muted celebration after Australian nightwatchman Nathan Lyon was caught behind off Ollie Robinson that had former captain Michael Vaughan unimpressed.

“Robinson, not exactly over the moon about it,” commentator Mark Howard said, before Vaughan weighed in.

“You can clearly see that this England side have just not got their mojo at the minute,” he said on Fox Cricket.

“I know it’s a nightwatchman, but you’ve still got to be up for the wicket.”

After a disappointing day one of the Boxing Day Test, Monday morning started dramatically for the tourists, with four COVID-19 cases among their touring staff and travelling family group briefly throwing the day’s play into disarray.

Fortunately, the team would get the all-clear to head to the ground with only a half-hour delay to the scheduled start of 10:30am (AEDT).

It didn’t take long for the visitors to heed Vaughan’s call, either; the team going up as one when Mark Wood had Marnus Labuschagne caught in the slips cordon for 1 shortly after.

The edge off Wood and Root takes the catch!#Ashes pic.twitter.com/iMzJxOTmVI

Since coming into the team in the last Ashes series in England back in 2019, Marnus Labuschagne has risen from bit-part all-rounder to the number one Test batter in the world.

Key to his rise has been his remarkable record in first innings; since the Lord’s Ashes Test of that series, Labuschagne has averaged a staggering 102 the first time he’s batted in a Test, with six centuries and a lowest score of just 47.

In his first knock in each of his last 14 Tests Marnus Labuschagne has scored 1,428 runs at an average of 102
His lowest score in those 14 first knocks is 47
The next best highest lowest first innings score in a 14 Test span by any cricketer is 30

However, that all changed on the morning of day two, with an excellent delivery from Wood seeing the gun number three edge to a gleeful Joe Root at first slip for only 1 – a mere 46 runs lower than his previous-worst first innings score since his return. 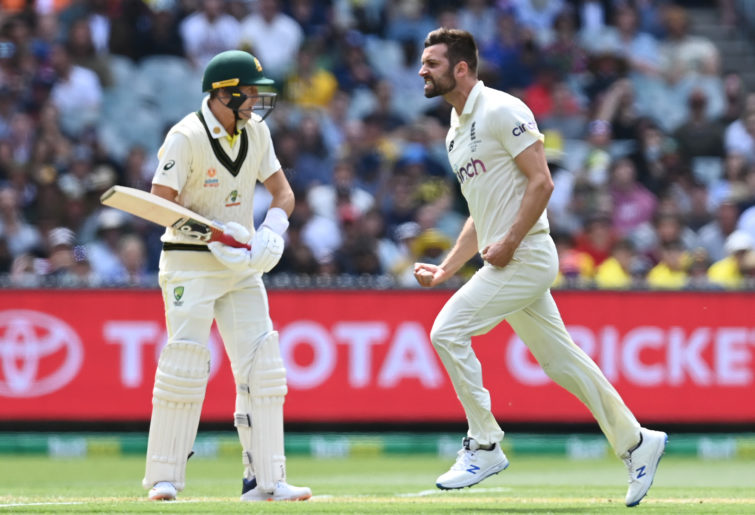 Little wonder the Poms were pumped.

Regarded by many as one of the most nervous cricketers to ever play for Australia, Nathan Lyon had some encouraging words for debutant Scott Boland on day one at the MCG – while also pumping himself up.

Boland became just the second men’s Indigenous player to play Test cricket for Australia at the MCG, with his maiden wicket of Mark Wood midway through the day’s play sparking joyful scenes both on the field and in the stands.

However, his debut had nothing on Lyon’s memorable five-wicket haul against Sri Lanka in 2011 – and Boland revealed at stumps how keen the off-spinner was to let him know about it.

Scott Boland reveals how nervous he was prior to his first over. Nathan Lyon came up to him and said he only had one chance to join Lyon’s club of getting a wicket off his first ball in Test cricket ???? @FoxCricket #Ashes

“I was really nervous before my first ball and had Nathan Lyon telling me I only had one chance to join his club in getting a wicket off the first ball,” Boland joked.