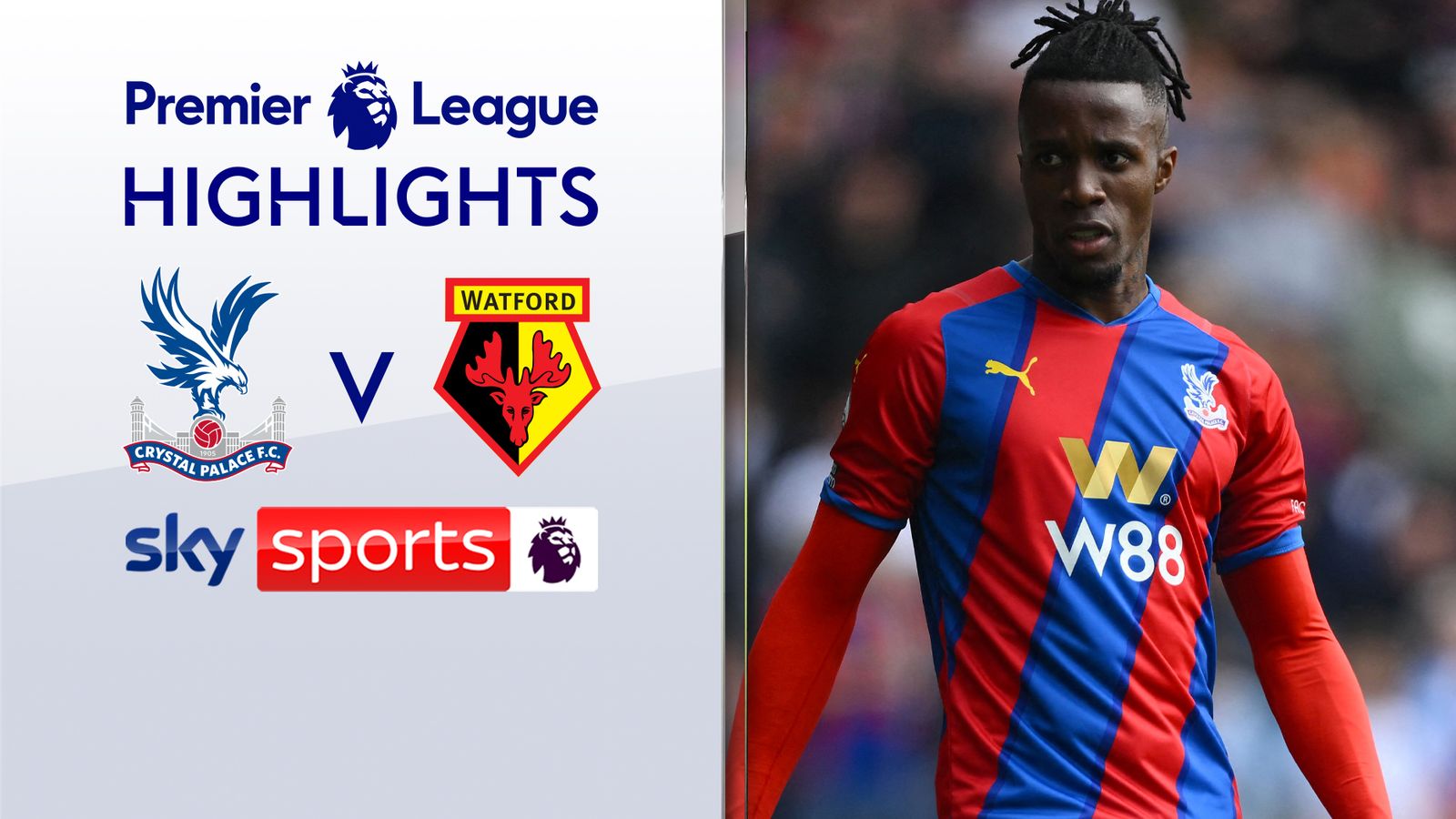 Wilfried Zaha’s first-half penalty was enough for Crystal Palace to beat Watford 1-0, confirming the Hornets’ relegation from the Premier League.

Despite plenty of pre-match pleasantries, it was an unhappy return for Roy Hodgson to Selhurst Park – back at the club for the first time since his departure as manager last summer – with his side’s return to the Championship confirmed on Saturday afternoon.

The issue was ultimately decided in the first half when Crystal Palace were awarded a penalty. Michael Olise’s header hit Hassane Kamara on the arm, although the Watford midfielder protested he was pushed in the build-up.

But VAR did not agree and stuck with referee Graham Scott’s decision to award the penalty, which Zaha fired home into the far corner. It was his 13th goal of the season, making this his best-ever goalscoring campaign in the Premier League.

Watford offered very little by way of a reply – registering just one shot on target – and finished the game with 10 men when Kamara was sent off for a second yellow card in the 69th minute. He will now miss Wednesday’s game against Everton, although it is no longer a relegation decider for Watford.

When asked to reflect on the defeat, Hodgson pointed to last weekend’s 2-1 loss at Burnley as arguably the result that relegated his side

He told Sky Sports: “Not much of any difference really from the defeat last week… When those last two goals went and we were 12 points behind with four games to play, I think only someone who has got no idea what football is about would believe we could still do it because the four games we’ve got are tough ones and the other teams have got plenty of games to get the points they need.

“We were really resigned to that last week and that makes today’s performance even more commendable. Many teams would have shrugged their shoulders and said ‘we can’t do much more’, especially after the penalty which I think is a decision we’re entitled to contest.

“But we kept going, we remained competitive until the end and we made Crystal Palace know they’ve been in a game and that was a good effort from our team.”

As for Crystal Palace, a solid season under Patrick Vieira keeps building. They have now kept four successive clean sheets at Selhurst Park, doing so for the first time since December 2012 in the Championship. They move into ninth place ahead of the remaining games this weekend.

Team news
Crystal Palace made five changes. Jack Butland came in between the sticks, replacing Vicente Guaita, with Michael Olise, Wilfried Zaha, Will Hughes and Odsonne Edouard also coming into he XI.
Guaita missed out on the matchday squad, with James McArthur also missing. Jeffrey Schlupp, Jordan Ayew and Jean-Philippe Mateta started on the bench.
Watford also made four changes from their defeat to Burnley. Christian Kabasele started on the bench while Imran Louza, Juraj Kucka and Joao Pedro all missed out through injury.
Craig Cathcart and Tom Cleverley were both fit to start, with Joshua King and Edo Kayembe also coming into the XI.
Crystal Palace dominated the first-half chances, and arguably should have added more to their tally before the break. Early on, Marc Guehi nodded an effort wide at the back post, with Olise and Zaha also sending shots past the post.

While their goal came through a penalty, it was deserved for their play until that point, but their two best chances came just before the break.

Odsonne Edouard sent a crisp header goalwards after Eberechi Eze’s corner, but Ben Foster made a wonderful reactive save. Then, Zaha fed a lively Olise down the right wing after a lovely team move from Crystal Palace, but he fired over the bar from a tight angle.

Chances were at more of a premium after the break with Palace looking comfortable with their 1-0 lead. They should have doubled that in the 64th minute as Edouard danced past a number of yellow shirts before sending the ball through the six-yard box. However, Foster had positioned himself well at the near post, blocking the ball with his shins before Watford were able to clear.

Watford’s best chance of the game came in the 80th minute as Craig Cathcart nodded over from a corner, sending the ball onto the top of the net.

Jean-Philippe Mateta also came close to a Crystal Palace second late on. His initial header from Olise’s sweeping cross was well-stopped by Foster, with Mateta sending a stooped second header past the post. Jeffrey Schlupp also saw an angled shot well-saved by the Watford goalkeeper.

The Hornets now face another summer of rebuilding ahead of their Championship return, with the search for a new manager already under way after Hodgson announced he would be leaving the club at the end of the season.

“I have no regrets [about taking the Watford job]. One can’t be pleased with the job one has done if it doesn’t work out in the way everyone wanted it to. We came thinking we could help the team avoid relegation, but we haven’t been able to do that. They were in the relegation zone when we came and they’re still there.

“To say I was pleased would almost be an inflammatory remark. But I do think the team on occasions has been unlucky, the structure and the way they work could actually have given us a few more points, but it wasn’t to be.”

On the penalty: “He [Kamara] is pushed in the back, that’s what he said. I haven’t seen it, but certainly the way his body went, it looked like he was pushed. We’ll look at it tonight… and people will have their opinions.

“It doesn’t matter if the referee gives a penalty, that’s it and if the opposing team score it, you’re 1-0 down. That’s compounded, of course, by him being sent off in the second half, which I think made our performance with 10 men even more commendable.”

On his reception at Selhurst Park: “It just reminds me of what a wonderful crowd this is and how sad I was to miss them during the 15 months of lockdown during my final days here. It was great to come back and really touching, such a good reception, so as a result that can send me home happy tonight in some respects.”

Man of the match – Michael Olise
There may have been some raised eyebrows when Crystal Palace signed Olise from Reading in the summer, but the 20-year-old has flourished under Patrick Vieira and put in a superb performance against Watford.

He topped the rankings for shots inside the box, passes into the final third and crosses. He also made the most dribbles and won the highest number of duels.

Along with other attacking talent like Zaha, Edouard and Eze, it makes for an exciting prospect for Crystal Palace going forward.

Man of the match: Michael Olise.

Opta stats – Hornets relegated
This is the first time in his managerial career that Roy Hodgson will end a Premier League campaign in the relegation zone with a team.
Since the start of the 2013-14 campaign, only Manchester City (52) and Liverpool (51) have scored more Premier League penalties than Crystal Palace (48, one more than Man Utd).
Wilfried Zaha is the first Crystal Palace player to score both home and away versus Watford in a league season since Zaha himself in 2011-12 in the Championship.
What’s next?
Crystal Palace have two immediate away trips to think about, with Patrick Vieira’s side going to Aston Villa next weekend, before facing Everton at Goodison Park four days later. The Eagles end the season with a home game against Manchester United at Selhurst Park.

Already-relegated Watford also face Everton in the Premier League season run-in, with the Hornets hosting the Toffees on Wednesday. Leicester City are then the visitors to Vicarage Road on the following Sunday, before Roy Hodgson’s final game in the Watford dugout away at Chelsea on May 22.