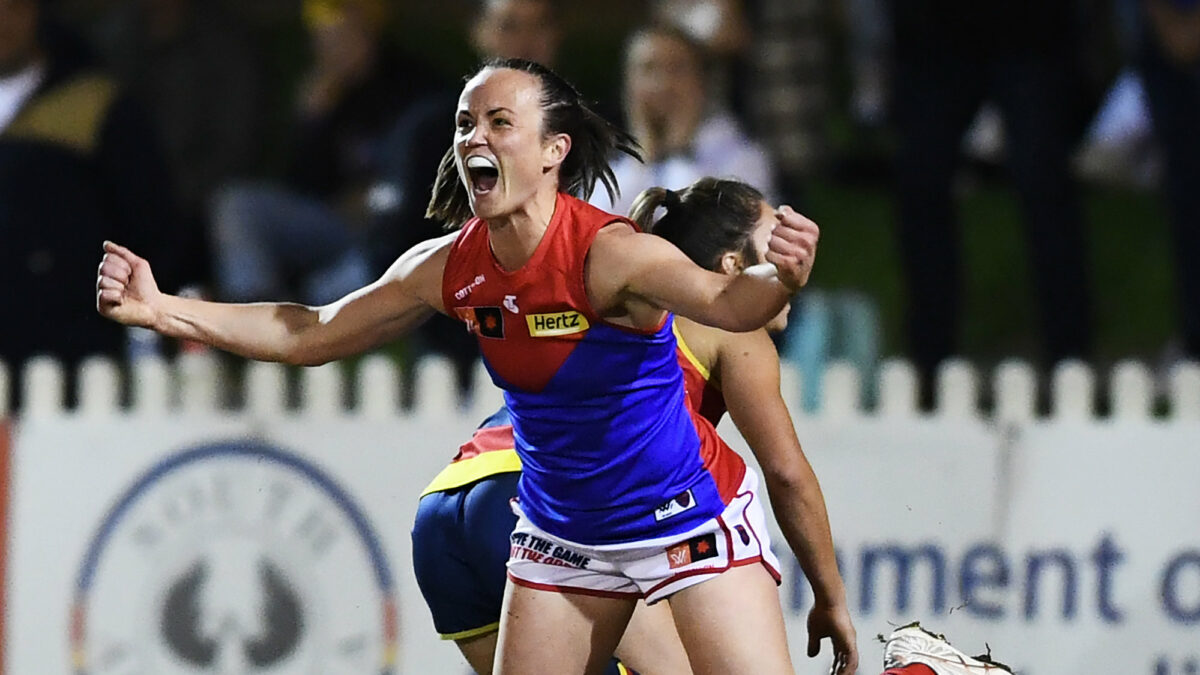 Ever since the great Daisy Pearce announced her retirement from the AFLW during the week, debate has raged over just how Pearce’s achievements should be commemorated – and from some corners, whether they should be at all.

There has been the usual mix of bad-faith attacks on the standard of women’s footy (that, as usual, miss the point entirely), as well as more reasonable suggestions that honouring Pearce should be confined solely to the code and league she is synonymous with, or that others might be more deserving of the rapturous praise bestowed upon her for her playing career.

It’s true that several women’s footy stars, most obviously Erin Phillips, have been more exceptional on the field than Pearce during the AFLW’s seven seasons to date.

It’s also true that AFLW accolades should and likely will now carry her name into the future – certainly the AFLPA Best Captain award would fit her snugly having won in four times.

But Daisy Pearce’s legacy extends beyond just the AFLW into the code as a whole (and, I’d argue, all of Australian sport). She isn’t just a legend of the women’s game – she’s one of Australian Rules football’s most important ever figures.

If ever an athlete deserved a statue, it’s her.

More than any other player, and as much as any other person period, she has taken women’s footy from the invisible outskirts of the suburban scene into a nationwide competition where fans by the thousands flock to see their heroes take to the biggest stadiums in the country.

She has inspired a generation of young girls who love the game to think that they can follow in her footsteps all the way to the big time. Just as they pick up a tennis racquet in the backyard and pretend to be Ash Barty, or score a goal on the football pitch and try a Sam Kerr-style backflip, or try to replicate Alyssa Healy’s fearsome straight drive, so too do they grab a Sherrin and dream of being Daisy.

The AFL, and sport in general, doesn’t necessarily confine its accolades to the field of play. The award for the AFL’s fairest and best player is after inaugural VFL administrator Chas Brownlow. The statue outside the Westpac Centre, Collingwood’s base of operations, is of Lou Richards, a man whose legacy and impact on the game was substantially more significant off the field than on.

It’s important to note, too, that while Pearce may not have the AFLW accolades that Phillips does, her career before then was filled to the brim with just about every award she could possibly claim.

She won a ridiculous 10 VFLW premierships with the Darebin Falcons, seven as skipper, turning the team into the undisputed powerhouse of that competition.

Along the way, she earned seven Helen Lambert Medals for the league’s best and fairest player in an eight-year stretch predating the AFLW’s inauguration. That medal now bears her name as well.

She was best afield in two of those grand final wins, won five Falcons best and fairests in a stacked team, and of course dominated the inaugural women’s exhibition match played between her Melbourne and the Western Bulldogs in June 2013, the game that truly set the wheels in motion for the national competition to arrive less than four years later.

The point of this is that Pearce was an outrageously good footballer who peaked before the AFLW came about. She had to wait until she was 28 to prove herself on the big stage, a point where most athletes begin their decline.

That she still excelled was almost as remarkable as Phillips likewise dominating while three years older. 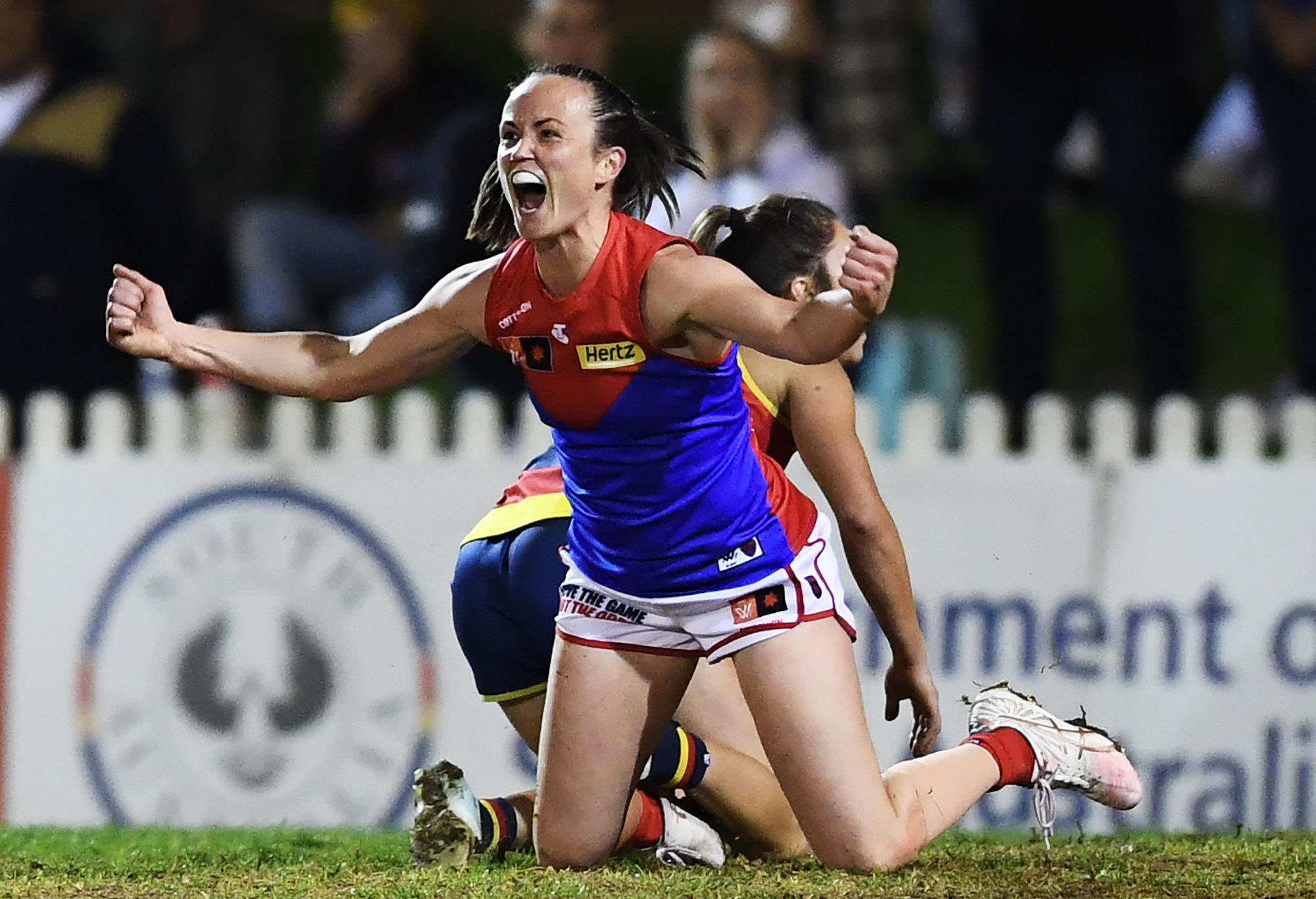 Daisy Pearce of the Demons celebrates a goal. (Photo by Mark Brake/Getty Images)

This shouldn’t be a competition between Pearce and Phillips, though. When Phillips brings her glittering career to a close, there can be a debate about whether she deserves a statue too – and I have a sneaking suspicion a lot of the same people arguing Pearce doesn’t warrant a statue because Phillips was better won’t exactly be coming out to demand one for her then.

It’s just the same as the sneering when Tayla Harris’ statue was unveiled in September 2019, with people everywhere coming to argue that there were plenty of female athletes who merited a statue more.

Yes, Cathy Freeman, Sally Pearson, Pearce and many others should get statues: but nothing was stopping them from getting one as well! Unless the argument was Harris getting a statue would delegitimise every other subsequent statue created and make them all utterly worthless, it made no sense then and makes no sense now.

As a final point, the rise of the AFLW has, in my view, been Australian football’s most significant step forward since the official launch of the AFL as a national competition more than 30 years ago.

According to the AFL’s statistics, a year ago the numbers of women and girls playing the game across all levels was up to nearly 600,000 – that’s nearly a third of all participants nationwide. An unthinkable number even seven years ago, when the number pre-dating the arrival of the AFLW sat at around 320,000.

Whatever your opinion on the AFLW competition – and I’m expecting to read plenty in the comments – surely we can all agree that such a surge in interest in the game and in children participating in local sport is absolutely fantastic.

For a long time, Australian football gatekept its code and allowed only men in.

That’s now no longer the case – and the sport is far healthier, wholer, and better than ever.

None of that happens without the arrival of the AFLW and its growing public footprint – you can’t be what you can’t see. And nobody has epitomised this better throughout her playing career than Daisy Pearce.

She was the VFLW’s biggest star at a time when it was growing into a mainstay of Victorian community sport, and was so gosh darn great it made the powers that be sit back, take notice and realise that maybe a national competition could be viable after all.

In the first season of the AFLW, when most of the players were still relative unknowns or code-hoppers from other sports, she was the one household name. Passionate basketball-following footy fans would have recognised Phillips (though would have had a hard time realising what a megastar she’d become), but everyone knew who Daisy Pearce was.

We’re now starting to see the fruits of her long, dedicated, frequently frustrating and almost totally unpaid work, too: the first graduates of dedicated junior women’s football pathways are sliding onto the AFL scene, girls who grew up primarily playing Aussie Rules and didn’t need to be lured from basketball, or netball, or the sports that have historically been far more open and welcome to talented youngsters looking to make a career out of it.

Perhaps someday soon, the AFLW will become partly or fully professionalised, and the players can make the game their full-time focus rather than something to work around their day jobs.

Pearce won’t be around to claim those rewards, but she set into motion the rolling stone that is gaining more and more momentum with every passing year. When that landmark is finally reached, it will be in no small part because of her.

A statue wouldn’t even come close to giving Pearce the credit she deserves for where women’s footy is now, nor commemorating the significance of her impact on it. But it’d be a nice start.