Dak Prescott overcame two first-half interceptions – seeing him tie Derek Carr for the league-lead with 14 – by throwing two TDs to tight end Dalton Schultz in the second half; the Cowboys (12-4) have won six of their last seven games, while the Titans (7-9) have now lost six straight Highlights of the game between the Dallas Cowboys and the Tennessee Titans in Week 17 of the NFL season.

Highlights of the game between the Dallas Cowboys and the Tennessee Titans in Week 17 of the NFL season.

Dak Prescott threw for 282 yards and two touchdowns to Dalton Schultz as the Dallas Cowboys beat the banged-up Tennessee Titans 27-13 on Thursday night, their sixth win in seven games.

Story of the Game

With the victory, the Cowboys (12-4) posted their first back-to-back 12-win seasons since 1994 and 1995, when the franchise won the last of their five Super Bowl titles.

Dallas are already assured of a playoff spot, but they still need to finish the regular season with a win at the Washington Commanders (7-7-1), and hope that the Philadelphia Eagles (13-2) lose out, for a chance at a second-straight NFC East division title. Otherwise, they will be locked into the No 5 seed in the NFC. 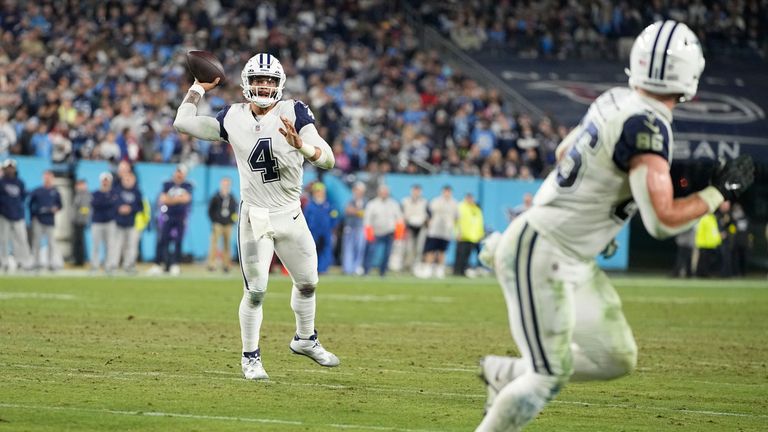 Dallas Cowboys quarterback Dak Prescott showed off his connection with tight end Dalton Schultz as they combined for two second-half touchdowns in the Thursday night win over the Tennessee Titans.

Dallas Cowboys quarterback Dak Prescott showed off his connection with tight end Dalton Schultz as they combined for two second-half touchdowns in the Thursday night win over the Tennessee Titans.

The injury-ravaged Titans (7-9), meanwhile, lost a sixth straight, just hours after placing their quarterback Ryan Tannehill on injured reserve, likely ending his season. He is one of 22 players currently on IR for the team, with Tennessee leading the NFL in using 83 different players this season.

The Titans must win next week’s regular-season finale at the Jacksonville Jaguars (7-8) in order to claim a postseason berth as the AFC South champions ahead of the Jags.

With their playoff hopes resting on next week’s encounter, the Titans rested the NFL’s second-leading rusher Derrick Henry for the Cowboys clash and gave backup quarterback Joshua Dobbs his first career NFL start instead of rookie Malik Willis, their third-round draft pick back in April.

Dobbs had more passing yards by half-time than Willis managed in any of his first three starts for the team. He finished with 232 yards and the first TD pass of his career, a seven-yarder to Robert Woods, that pulled the Titans to within four of Dallas, trailing 17-13 late in the third quarter. 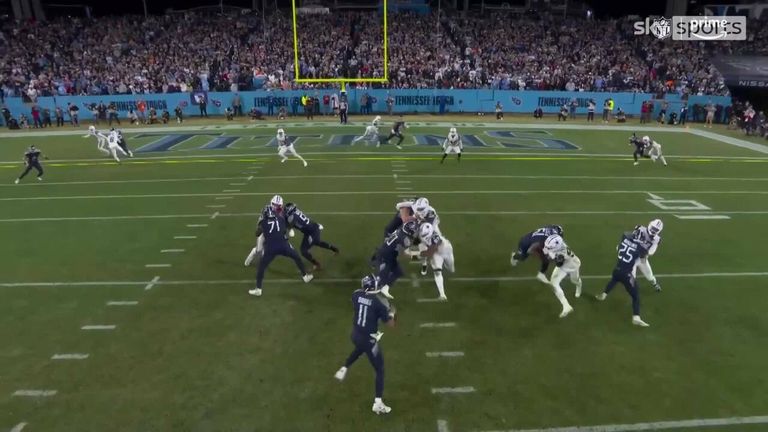 Ezekiel Elliott had opened the scoring with a one-yard touchdown run in the first – his ninth-straight game with a rushing score – before the two teams exchanged only field goals for the remainder of the first half, with the Cowboys up 10-6 by the break.

Prescott threw two interceptions in the first half, helping set up both of Tennessee’s field goals, to give him 14 on the season – tying him with the now-benched Las Vegas Raiders quarterback Derek Carr for the league lead.

He made amends in the second half, however. Prescott hit Schultz for their first touchdown on Dallas’ opening offensive series, and though Dobbs’ TD toss to Woods brought the Titans back in the contest, it was the Cowboys who scored the final 10 points of the game to close out the win – Prescott capping a 75-yard drive with his second TD pass to Schultz, and Brett Maher tacking on a 45-yard field goal midway through the fourth quarter. 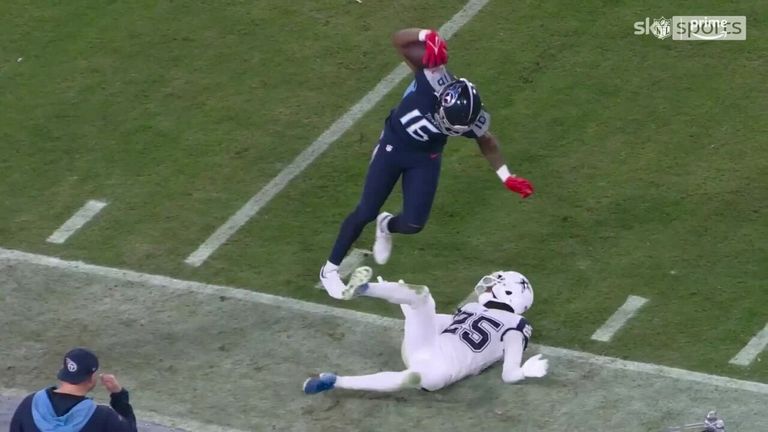 Tennessee Titans receiver Treylon Burks showed incredible balance by somehow managing to stay in bounds when being tackled by a Dallas Cowboys defender close to the sideline.

Tennessee Titans receiver Treylon Burks showed incredible balance by somehow managing to stay in bounds when being tackled by a Dallas Cowboys defender close to the sideline.

The New England Patriots (7-8) and Miami Dolphins (8-7) face off in Foxborough in a key AFC East divisional matchup with huge playoff implications as part of the live NFL triple-header on Sky Sports on New Year’s Day. The Dolphins know that a win will guarantee a postseason berth – the only problem being, they’ve lost their last four in a row prior to Sunday’s meeting. As for the Patriots, nothing other than a victory will do if they’re to keep their playoff ambitions alive, though they too have hit a rough patch of form with four defeats in five. Kick-off for this crunch clash is at 6pm.

Following on from the action at Gillette Stadium, Aaron Rodgers and the Green Bay Packers (7-8) are also desperately clinging on to their playoff dreams and need a win against their divisional rivals, and NFC North champions, the Minnesota Vikings (12-3) when they host Kirk Cousins and co at a frigid Lambeau Field from 9.25pm.

Rounding off the Sunday night entertainment, we join our friends at NBC for Football Night in America for yet another huge divisional rivalry matchup on Sunday Night Football, this one involving the Baltimore Ravens (10-5) and Pittsburgh Steelers (7-8). The hosts are looking to keep pace with the Cincinnati Bengals and push them all the way for the AFC North crown, while the visiting Steelers must win to hang on to their hopes of clinching a wild card spot. This one gets under way at 1.20am, in the early hours of Monday morning.