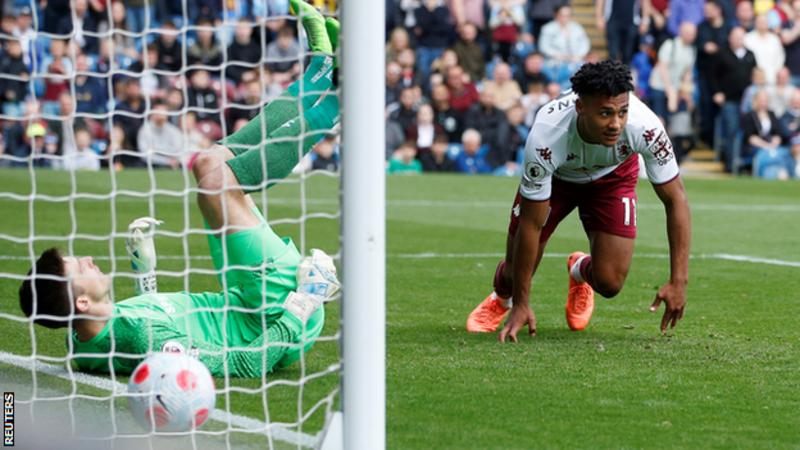 Ings, who spent four years with the Clarets before moving to Liverpool in 2015, did not celebrate after tucking past Nick Pope, having been put through by Emiliano Buendia.

Argentine Buendia, starting in place of Philippe Coutinho who was on the bench, then scored with a deflected finish after being picked out inside the box by Lucas Digne.

Ollie Watkins added to the home side’s misery when he was left unmarked to head the third after John McGinn’s cross.

Burnley had won their previous three games to give themselves hope of avoiding relegation, but they were back to their bad old habits.

Wout Weghorst headed a couple of chances wide and went close with another attempt on the turn, while Dwight McNeil forced a couple of saves before substitute Maxwel Cornet scored a consolation in stoppage time.

With three games remaining, Burnley are 16th in the table, two points clear of Everton, who are third from bottom but have two games in hand.

Leeds, who are directly below the Clarets in 17th, are level on 34 points with Burnley but have one game in hand.

“The league didn’t finish today,” said Burnley caretaker boss Mike Jackson. “You have to find a way of moving forward.

“It’s about how you react. We have a bit of time before our next game.”

Reaction from Turf Moor & Premier League latest
Everton? Leeds? Burnley? Who is set to go down?
Visit our Burnley page
Go straight to all the best Aston Villa content
Clarets in big trouble
Burnley looked down and out after slumping to 18th, four points from safety, before 10 points from four games under Jackson raised hopes they could avoid the drop.

But Villa delivered a huge blow to their survival hopes as the home side unravelled.

The Clarets looked a different side to the one that has secured hard-earned wins against Southampton, Wolves and Watford since Sean Dyche’s departure.

There was no marking for Watkins’ third goal while time and again they carelessly switched off and gifted their opponents possession.

The Clarets will drop back into the relegation zone on Sunday if Leeds avoid defeat at Arsenal and Everton win at Leicester.

Jackson knows he now has to lift his players and make sure they get this result out of their system quickly as they face back-to-back away games against Tottenham and Villa before entertaining Newcastle on the final day of the season.

With Ben Mee still absent, Jackson will hope James Tarkowski makes a swift recovery after the defender was forced off with a hamstring problem.

‘We want Coutinho’
Villa’s sixth win in 12 away games under Steven Gerrard all but secures their place in the Premier League for another season.

Manager Gerrard has been frustrated at his side’s lack of consistency and said before this game that the team had “underachieved” this season.

He faces a busy summer in the transfer market and one of the first decisions he has to make is whether to sign Coutinho permanently.

The arrival of the former Liverpool playmaker on loan from Barcelona in January included the option to buy the 29-year-old for £33m.

However, Gerrard opted to start the impressive Buendia instead of Coutinho at Turf Moor.

But the Villa boss made it clear after the game he wants to keep the player and explained he did not start Coutinho because he wanted fresh legs for Tuesday’s home game against his former club Liverpool.

“We want Philippe Coutinho here,” added Gerrard. “We have got five games in a short pace of time and the same players cannot go Saturday-Tuesday all the time.”