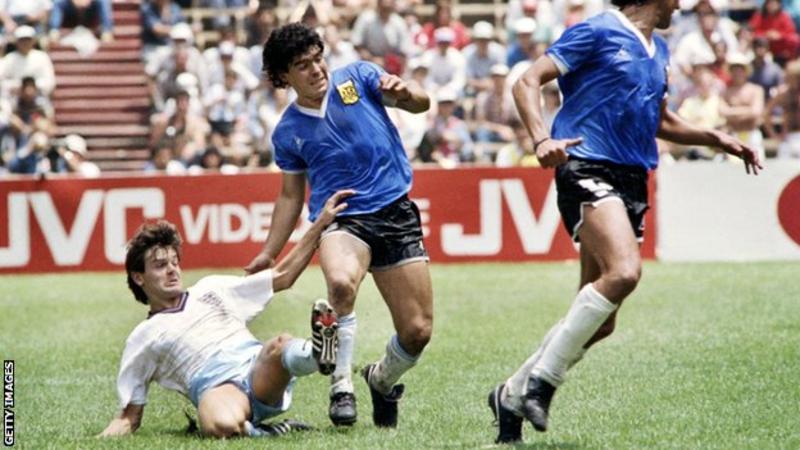 The Argentina shirt worn by Diego Maradona when he scored his infamous ‘Hand of God’ goal against England at the 1986 World Cup is to be auctioned.

The iconic blue away shirt, currently owned by former England midfielder Steve Hodge, is expected to fetch more than £4m.

Maradona also scored one of greatest World Cup goals in that game on the way to winning the tournament.

After Maradona died in November 2020, Hodge said the shirt was not for sale.

In December that year Hodge said he had “people knocking on my door non-stop”, and that reports he was looking to sell the shirt were false. “I find it disrespectful and totally wrong,” he added at the time. “It’s not for sale. I am not trying to sell it.”

Midfielder Hodge, 59, who appeared in two World Cups for England and won 24 caps, has been in possession of the shirt since swapping it with Maradona in the tunnel after the 1986 quarter-final which Argentina won 2-1.

He loaned the shirt to the National Football Museum, where it has been for housed for 20 years, but it will now be auctioned at Sotheby’s in London with bidding open from April 20 to May 4.

The current record price for a shirt worn during a game is held by New York Yankees baseball legend Babe Ruth’s jersey, which sold for $5.6m (£4.4m) in 2019.

Maradona is widely considered one of the greatest ever footballers, playing a hugely significant role in Argentina’s World Cup win at Mexico ’86.

He played for Boca Juniors, Barcelona, Sevilla and Newell’s Old Boys in a glittering club career, but it was at Napoli between 1984 and 1991 that he cemented his reputation as the world’s best player of his generation.

He captained them to winning their first ever Italian Serie A title in 1986-87, and followed it with a second in 1989-90, as well as winning the Uefa Cup, Coppa Italia and Italian Super Cup in his time with the club.