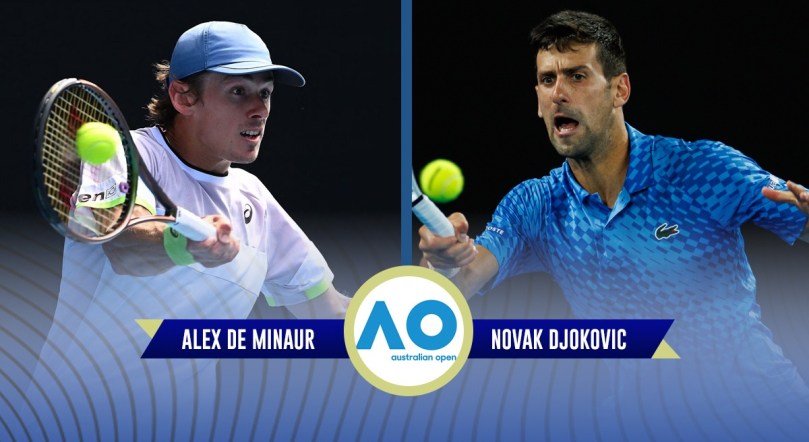 Djokovic vs Minaur LIVE Streaming – Australian Open LIVE Streaming – Day 8 schedule of play: Novak Djokovic will be tested BIG TIME on Monday. Fourth seed Djokovic is playing against 22nd seed Alex De Minaur for place in LAST-8. Along with his opponent, Djokovic’s battle with his HAMSTRING INJURY will be key & can decide the course of the match. Djokovic has appeared to struggle with the muscle issue in recent matches. His right leg was strapped in his straight-sets victory over No 27 seed Grigor Dimitrov and admitted he was feeling “really bad” after the match: Follow Australian Open DAY-8 LIVE & Djokovic vs Minaur LIVE Streaming on SonyLIV

Where to WATCH Djokovic vs Minaur LIVE Streaming?

Djokovic vs Minaur – Who starts favorite? Without doubt it will be the Serb. His confidence is at an all-time high as he finished the 2022 season by winning the ATP Finals for the sixth time in his career. He also won the Adelaide International 1 earlier this month. He continues to dominate his favorite tournament, having now won 24 consecutive matches in Melbourne.

The last time he lost at the Australian Open was in 2018 when Chung Hyeon beat him in the fourth round.

“Of course, it’s a big challenge of playing an Aussie guy here in front of his home crowd. I’m sure that the atmosphere will be electric, and he’s going to have a lot of support, and he’s going to be pumped to try to win the match,” stated Djokovic.

“But I’ve had experiences before. I played Lleyton Hewitt here. I played some big Aussie players, so I know how that feels.

“The fact that I never faced him is also challenging for both me and him. I’ve watched him play numerous times. I know how he plays. Let’s see what happens.”

Can Minaur put up a fight? Minaur will aim to achieve his best result in the first Grand Slam tournament of the year and upset the nine-time champion to reach the quarter-finals.

For de Minaur, it’s a simple game plan. The patriotic 23-year-old is going to leave it all out there.

“As a kid growing up, those are the stages you want to be playing on,” stated the world No.24.

“I’m not going to read into too much of that injury. Ultimately, he’s one of the best players in the world, and I’m just going to have to take it to him and not shy away from the occasion.

“I’m going to make sure to make it as tough as I can, and just bring the recent experience I’ve had on court and how I’ve been feeling. I will get fired up, get the crowd behind me, and I’ll definitely have a good time.”