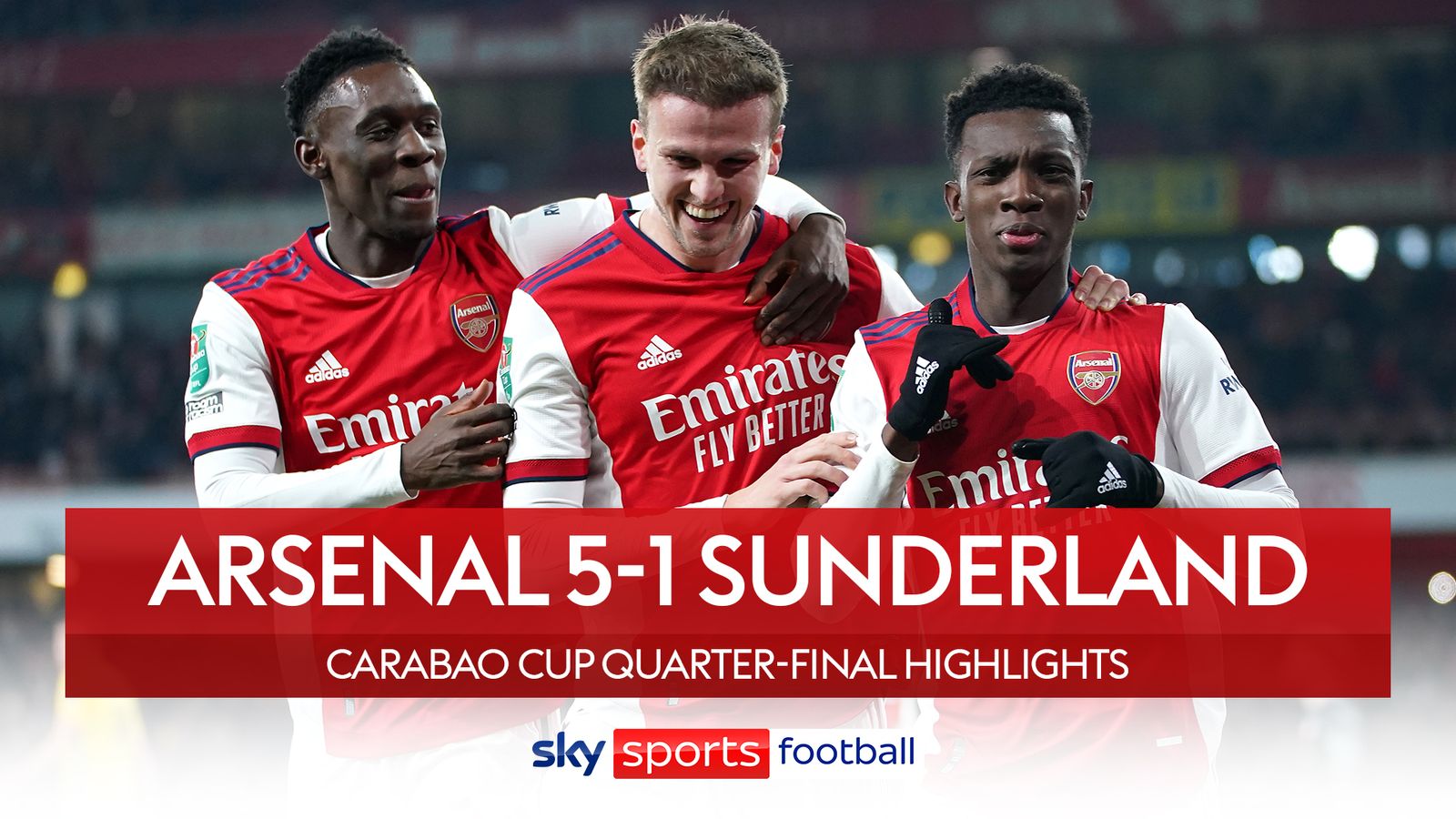 Eddie Nketiah scored a hat-trick to steer Arsenal past Sunderland and into the Carabao Cup semi-finals with a 5-1 victory.

Striker Nketiah and Nicolas Pepe got Arsenal on their way in the first half at the Emirates Stadium, before Nathan Broadhead pulled one back for the League One side.

Two more fine finishes from Nketiah after the break sealed a comprehensive win, however, while 18-year-old Charlie Patino rounded off a fine night for the Gunners with a late goal on his senior debut.

Nketiah steals the show as Arsenal romp to victory

Mikel Arteta made nine Arsenal changes, but it didn’t seem to halt the recent momentum that has seen them surge into the Premier League top four.

Nketiah gave them the lead on 17 minutes, as he showed off his predatory instincts to turn the ball home following a corner, after Lee Burge had pushed Rob Holding’s header into his path.

Pepe doubled their advantage 10 minutes later, after combining well with Cedric down the right before seeing his effort deflect off of Callum Doyle and past the unfortunate Burge.

Sunderland soon fought their way back into the game, however. After 31 minutes Alex Pritchard did brilliantly to launch a swift attack, which was continued by Dan Neil and Elliot Embleton, before the latter fed through Broadhead and he dinked it brilliantly over Bernd Leno.

Broadhead was forced off just before the break, however, and with his departure went much of Sunderland’s goal threat. Arsenal soon took control of things shortly after half-time, as Nketiah turned home a Nuno Tavares cross with a lovely flicked finish in the 49th minute, and then from Pepe’s ball with a delightful backheel just before the hour.

Youngster Patino then came off the bench late on for his debut and put the icing on the cake for Arsenal in the first minute of stoppage time, as he latched onto Pepe’s cross before sliding in his first senior goal.

Arsenal’s Mikel Arteta: “It’s great. We’re in the semi-finals and that’s what it was about today. We started well and scored two goals, but then we started not to respect our basics too much and we suffered a little, but then we picked up our level after that in the second half and we won.

“Eddie does what he does in training every day, he put the ball in the net. I think I’ve been very consistent with what I think about him, how much we like him and his contribution for us every time he plays is top.

“I want [him to stay], but he just wants more minutes. It’s difficult to go against that, but as a club and personally I really want him to stay here. That’s what we are trying to do, he’s our player and a really important part of the squad.”

Sunderland’s Lee Johnson: “I thought we had a really good spell just after we scored, we grew in confidence and Arsenal found it quite difficult to get us off the ball in that final third. Earlier on in the game I think we threw the ball into the box too early, but we scored a really good goal and overall I’m really proud of the players. We’ve been beaten 5-1 but we have had some good spells in the match.

“The bigger picture for us is that it’s a great learning experience for our players. We’ve said in there that now they know the standard, and even senior players can take it away. When you can feel the quality of Premier League opposition, you learn so much more than you do in something like a passing drill I’ve put on in training.”

How Patino got his first Arsenal goal

The match may have belonged mostly to Nketiah, but there was plenty of excitement late on as 18-year-old Patino came off the bench to make his senior debut and score his first Arsenal goal.

“He’s a player that has a lot of personality and I’m delighted for him,” said Arteta. “He’s a kid we like so much, and to score like that on his debut is something special.”

Man of the Match: Eddie Nketiah

It may have been against League One opposition, but with Pierre-Emerick Aubameyang still out in the cold at Arsenal, Nketiah did his own reputation no harm with a lethal performance.

Three clinical, instinctive finishes would certainly have provided food for thought for Arteta ahead of a busy run of fixtures during the festive period. Nketiah will hope he has done enough to be seen again before the semi-final.

When is the draw for the Carabao Cup quarter-finals?
The Carabao Cup semi-final draw will take place live on Sky Sports Football following the conclusion of Tottenham Hotspur vs West Ham United on Wednesday, December 22.

Arsenal will travel to Norwich on Boxing Day in the Premier League; kick-off 3pm. Sunderland will next play on Monday December 27 in League One, taking on Doncaster live on Sky Sports Football.