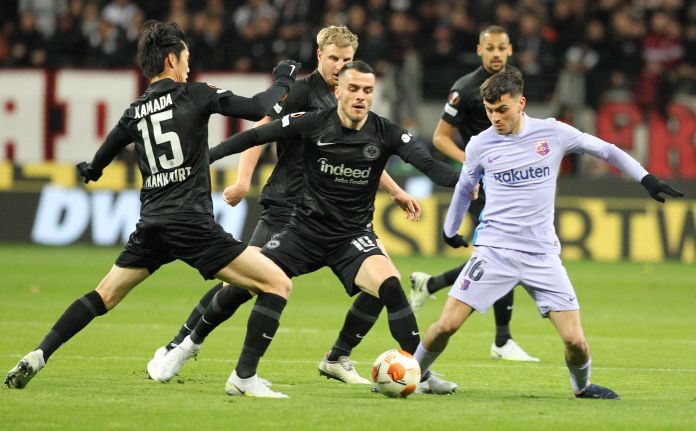 Eintracht Frankfurt vs Barcelona Live: Frankfurt vs Barcelona 1st Leg – We go to the break with the scoreline 0-0, despite both sides having decent chances. It was the visitors who nearly took the lead early on, as Trapp made a world-class save at full-stretch to tip a Torres shot from distance past the post. The hosts then should’ve been in front just minutes later, when a Lindstrom cross found Sow in the middle of the box in space. Follow InsideSport.IN for the latest Europa League updates.

The Swiss midfielder shot first time, but could only place it well wide as it looked as if he couldn’t miss. The German side were then awarded a penalty on 37 minutes, when a Ter Stegen fumble left the ball loose in the Barcelona area. Borre appeared to get there first, before being brought down by Busquets. However, the referee went to the VAR pitchside monitor to check his decision and ruled that the Spanish midfielder got a toe to the ball, and overturned his decision as we go into the interval goalless.

Eintracht Frankfurt vs Barcelona Live: It is goalless as both the teams had equal chances but the hosts look more threatening – Follow Live updates

Frankfurt could be with a fully fit squad except for Christopher Lenz (calf) and Diant Ramaj (knee) who are injured after Daichi Kamada played 69 minutes against Greuther Furth.

Rafael Borre was given the green light to start at the weekend after returning from international duty with Colombia, while defender Martin Hinteregger is back from a domestic ban and could demote Makoto Hasebe down to the bench.

Sam Lammers and Goncalo Paciencia are options off the bench in the final third amid Frankfurt’s scoreless streak.

Barcelona have a long list of injury at their hands as Ansu Fati has returned to training but could be too soon for him to play. COVID-positive striker Luuk de Jong is still absent alongside the injured Sergi Roberto and Samuel Umtiti, while Sergino Dest‘s hamstring issue leaves Xavi with a tricky situation to solve at right-back.

Dani Alves is ineligible for the Europa League, so Ronald Araujo may be required in a wide area this week as Eric Garcia and Gerard Pique link up in the heart of the backline.

Eintracht Frankfurt vs Barcelona LIVE: When and where to watch UEFA Europa League match, FRA vs BAR live streaming in your country, India?

What time does Eintracht Frankfurt vs Barcelona begin? Time
FRA vs BAR will kick off at 12:30 AM – IST

Where will Eintracht Frankfurt vs Barcelona be played? – Venue

Who will be the Match Official for the game? Referee

The broadcasting rights for the UEL 2021-22 will be available with the Sony Pictures Network. So you can the watch UEL 2021-22 Live Telecast In India on Sony Ten 2 HD and Sony Six. The channel is available for telecasting on all the service providers in India. You can connect with the DTH providers and get the channel started.