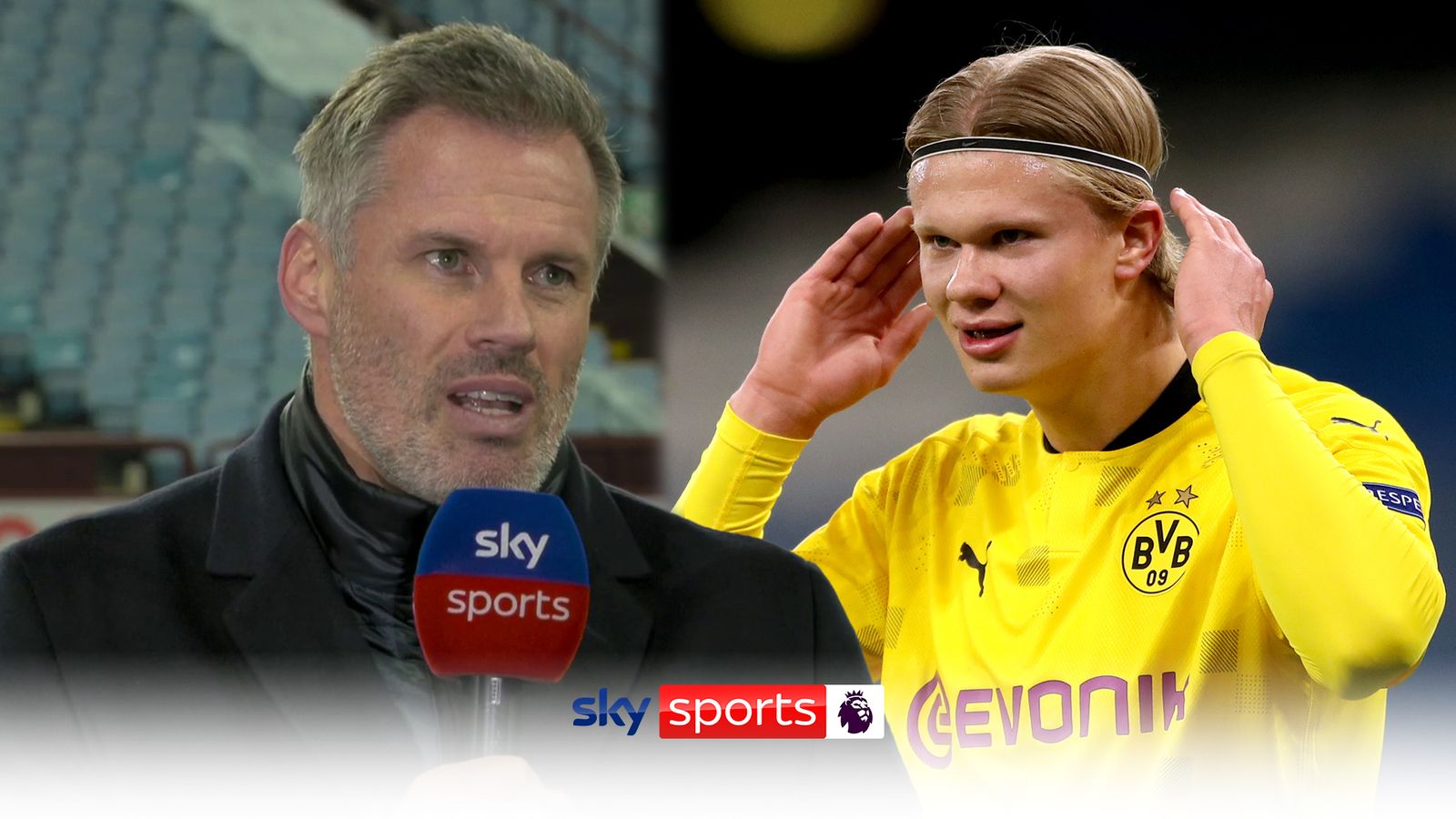 The arrival of Erling Haaland shows the Premier League is the strongest in the world, but the striker will not guarantee Manchester City success, warns Jamie Carragher.

City announced they had agreed a deal with Borussia Dortmund to sign Haaland on Tuesday. The Premier League champions will pay the striker’s £51.1m release clause and he will arrive at the Etihad on July 1, subject to terms being finalised.

Haaland is one of the most sought-after forwards in Europe, having scored 85 goals in 88 games for Dortmund, and is joining a City side that are just three wins away from securing a fourth Premier League title in five years.

The 21-year-old’s arrival is likely to see Pep Guardiola reduce his reliance on using midfielders or wingers as a ‘false nine’ – a tactic that has served City well in recent seasons – and Carragher is keen to see how Haaland and City adapt to one another.

Speaking on Sky Sports, Carragher said: “Brilliant signing – not just for Manchester City but for the Premier League. I think we are all intrigued as to how he will do. Along with [Kylian] Mbappe you feel he is one of the next two superstars to eclipse [Lionel] Messi and [Cristiano] Ronaldo and you are just delighted he’s in the Premier League.

“More often than not those players have gone to a Real Madrid or Barcelona, but you feel like the Premier League is the strongest league now – you’ve seen how well we’ve done in the Champions League.

“He will score goals – that’s what he has been brought in to do, of course he will. But that doesn’t guarantee that City will win everything. They will have to integrate him into the team. That means City will lose a creative player who helps them keep the ball.

“There are lots of questions, including from myself. We will be analysing his performances at City and how he fits in. They had a world-class striker a few years ago in Sergio Aguero and they have another one now.”

City’s last three league titles have been won with an average total of nearly 95 points, and Carragher thinks the level Guardiola’s side regularly reach means they have limited room for improvement in domestic competitions.

However, City’s bid to win an elusive Champions League again failed this season after their agonising exit to Real Madrid, and the former Liverpool defender believes this is where Haaland could make a crucial difference.

“It makes Man City stronger, of course it does,” said Carragher. “But I look at it a different way. There are so many points you can win in a season. Haaland is not going to elevate City to a different level, they are already at that level of getting 96 to 100 points a season.

“There will be small differences in certain games. You think back to Manchester City’s semi-final defeat to Real Madrid – if Haaland is playing, you would expect City to get through. I’m talking about making the difference there.

“There is not a huge jump for City to make – they are already at the highest level. Consistency-wise, over the last three or four years, they have probably been the best in Europe. It’s just to make a small difference in the biggest of games, such as those against Real Madrid.”

Haaland chose to join City over a number of Europe’s other biggest clubs, including Real, Bayern Munich and Barcelona, but Carragher believes the Norway international could still target a move to the Bernabeu or the Nou Camp later in his career.

“I always think Barcelona and Real Madrid are the two biggest clubs in the world which kids dream of playing for,” he said. “From my own experience at Liverpool, unless you were ultra-successful and doing everything you could, if one of those clubs came for one of your players you had a problem.

“The same happened with Manchester United and Ronaldo. When those clubs come calling it is difficult to keep your players and it may be the case in five years’ time, that Haaland ends up at Madrid or Barcelona. That is the pull of those two clubs.”

Redknapp: Premier League is getting a superstar

Since Haaland joined Dortmund from Red Bull Salzburg in January 2020, only Robert Lewandowski and Luis Muriel have scored goals at a quicker rate than the Leeds-born striker.

Haaland has also scored 23 goals in just 19 games in the Champions League, and Jamie Redknapp says there is no doubt Haaland is arriving in the Premier League as one of the world’s genuine superstars.

“From a personal point of view, as a person that loves football, it’s the fact we’re getting a player at his prime and he’s going to be playing in the Premier League,” Redknapp told Sky Sports. “We didn’t really have prime Ronaldo, we didn’t have [Lionel] Messi obviously, so I think it’s great for our league to have someone everyone watches and kids love.

“The celebrations, the goals – he’s a fantastic footballer. It’s a huge challenge for him but one I think he’s going to love.

“The City fans have been crying out for a centre-forward and they’ve got one of the best in the world. I think we’re really going to see a superstar come into our league and it’s going to be great for everybody.”

Like Carragher, Redknapp accepts City are already operating at a high level, but believes Haaland could be the “final piece in the jigsaw” for Guardiola’s side.

“City are obviously paying him vast amounts of money, they need a forward – it just fits perfectly for them,” he said. “I didn’t want to see him go to Real Madrid or Barcelona – I wanted to see him playing in our league.

“Man City are going to be so strong because of it but it’s still going to be really tight in this league and Liverpool have shown they can live with them. But there’s been so many times where I’ve watched Man City and thought, ‘imagine if they had that final piece in the jigsaw’. He’s going to be an amazing player for them.”

Spoilt for choice? Watch Leeds vs Chelsea or Wolves vs Man City on the Sky Sports App

Can’t decide which of Wednesday’s crucial Premier League games to watch? With Wolves vs Man City kicking off during half-time of Leeds vs Chelsea, and both live on Sky Sports, you don’t need to miss a minute with our second-screen viewing on the Sky Sports App.