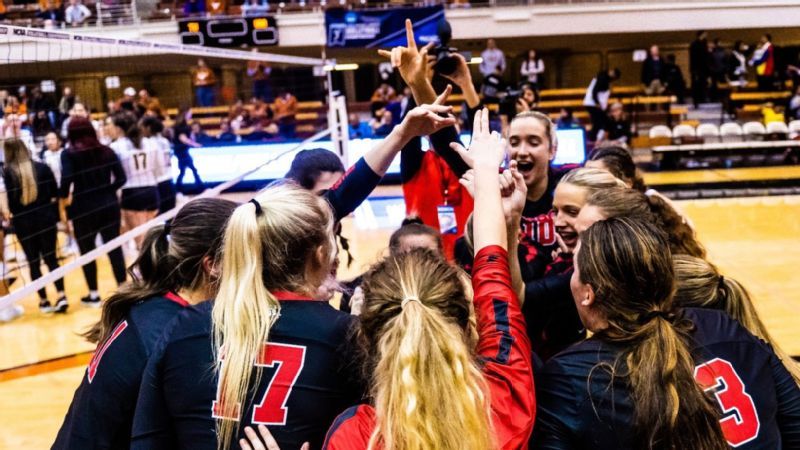 AUSTIN, Texas – The University of Georgia women’s volleyball team defeated eighth-seeded Towson in four sets Thursday evening at Gregory Gymnasium in the opening round of the NCAA Tournament (25-10, 25-23, 21-25, 25-20).

The Bulldogs will advance to the second round and will face the winner between (1) Texas and Fairleigh Dickinson Friday at 9 p.m., ET.

The Bulldogs’ offense was led by 26 kills from senior Kacie Evans on a .380 hitting clip. The kill count was her second highest of the season. She put up eight digs, an ace, and two blocks in the match.

At the service line, Georgia put down six aces in the match, three coming from setter Alexa Fortin.

Georgia jumped out to a quick 3-0 lead then used an 11-1 run to propel forward to a 14-3 advantage in the opening stanza. The run included three blocks and two service aces. Georgia kept its foot on the gas, going ahead 18-6 and forcing Towson’s (29-2) final timeout. The Dogs never looked back and rolled to a 25-10 opening set win. Fischer laid down five kills with three blocks while Evans had four kills in the opening set. Towson was held to a -.088 hitting clip in the set.

The Bulldogs’ momentum carried into set two, taking a 9-2 lead on the Tigers. Towson turned the tables and used a 7-1 run to narrow the lead to 11-10. Towson found its first lead of the match going into the second set media break, 15-14. Towson led by as much as 21-17 until Georgia recaptured the lead with a six-point run, 22-21. Knotted at 23-all, Georgia held on to win the next two rallies and take the set 25-23 and the 2-0 lead in the match.

A back-and-forth battle in set three opened the stanza. Towson won three-of-four points to go ahead 13-11 and Georgia took a timeout in the third. Towson stayed out in front, leading 22-16. A 3-1 Georgia run closed the gap to 23-19. After Towson drew set point at 24-19, an Evans kill and a block prolonged the set until Towson secured the frame 25-21, keeping the match alive.

Georgia rattled off six straight points early in set four to take a 7-2 lead. Georgia held on to the lead, going up six on Evans’ 25th kill, 17-11. Three-straight from the Tigers narrowed the lead to 19-16, prompting a Georgia timeout. After a UGA timeout, a service error gave tipped the 20-point mark for the Dogs. Narrowly ahead 20-18, Georgia held on to wrap up the set 25-20, taking the match in four sets.

Georgia Head Coach Tom Black
Opening statement… “Congratulations to Towson on a great season. 29-1 is hard to do no matter what. They were everything we expected them to be. Their hitters were a handful, and they had some difficult serving runs. We expected a tough NCAA match. Obliviously we started out pretty much on fire in the first set then they pushed back which good teams are going to do and I was proud of how the team found a way to respond. We had some tough serving runs and we were able to start converting in transition a little bit. It was a new situation for our team too. We made the tournament three years ago, but it was the first time in a while that we’ve been able to go to the second round. I expected some nerves but again, I thought the team fought through that like they have been all year long. I’m really proud to coach this team.”

On what the game plan was going into the match… “Just playing Georgia volleyball. When we’re at our best, we’re serving tough. I think our blocking went in spurts, but I think we are a tough blocking team. It came down to executing the game plan which I think the team did a good job of. Like I said, we knew it was going to be a tough match and it definitely was.”