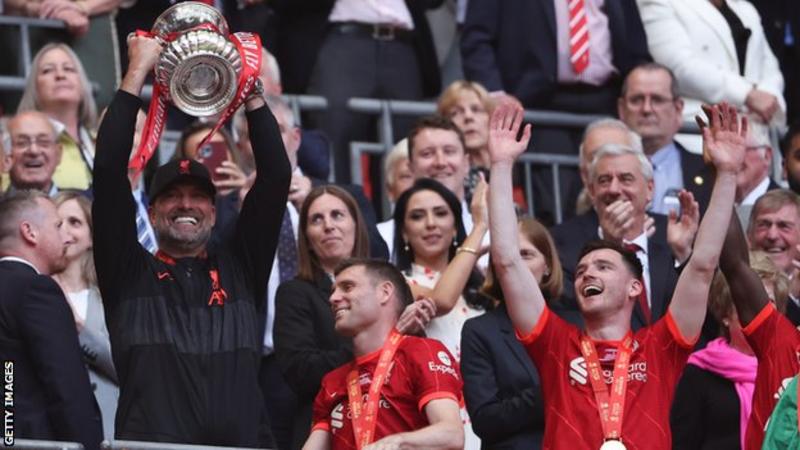 Liverpool boss Jurgen Klopp said he “could not be prouder” of his quadruple-chasing side after they beat Chelsea on penalties to win the FA Cup.

The Reds replicated their shootout win over Chelsea in the Carabao Cup final by triumphing 6-5 on spot-kicks after a goalless 90 minutes and extra time.

“I couldn’t be more proud of my boys, the shift they put in, how hard they fought,” Klopp told BBC Sport.

“It was an incredible game, a nerve-wracking shootout, my nails are gone.”

Klopp, 54, became the first German manager ever to lift the FA Cup after edging out compatriot Thomas Tuchel in a Wembley final for the second time in less than three months.

As in February’s final, the shootout went to sudden death with Alisson’s save from Mason Mount handing Liverpool the advantage before Konstantinos Tsimikas slotted home the winning penalty.

“It was intense – Chelsea would have deserved it exactly the same way we did, just like in the Carabao Cup – that’s how small the margins are,” added Klopp.

“Chelsea played outstanding but in the end there must be one winner and that was us today.”

The dramatic win kept alive Liverpool’s slim quadruple hopes – although the Premier League title may well elude them – with two games left, they trail leaders Manchester City by three points and have a goal difference that is inferior by seven.

“The quadruple thing is absolutely outstanding that we can talk about it. It’s crazy,” added Klopp. “It’s out of this world – this was game number 60 in an intense season.”

‘Chelsea were mentality monsters too’
Klopp has famously christened his side “mentality monsters” for the way they have responded to setbacks as they chase glory on four fronts this season.

But the Reds boss said Tuchel’s Chelsea also merited that moniker after playing their part in another absorbing encounter between the two clubs.

The sides traded gilt-edged chances during a rollercoaster period of normal time and each struck the woodwork – Luis Diaz and Andy Robertson for Liverpool and Marcos Alonso for Chelsea.

“I really feel for Chelsea – for the second time, 120 minutes and you get nothing, that’s too hard. But for us I’m pretty happy,” added Klopp.

While Klopp was full of praise for the beaten finalists, BBC Sport pundits marvelled at his Reds side after they secured the second trophy in their quadruple quest.

“What a team Klopp has put together,” former England striker Alan Shearer told BBC One. “To have two trophies already and the way they have done it – that takes belief, incredible.”

It was the fourth time this season the sides could not be separated in 90 minutes although Liverpool again prevailed on penalties to claim their eighth FA Cup, equalling Chelsea’s tally in the process.

Ex-Tottenham midfielder Jermaine Jenas added: “They were pushed all the way. They were tested. The questions were asked and they’ve come out on top again.”

Salah injury could be ‘big blow’ to Reds’ ambitions
Victory might well have come at a cost for Liverpool, however, with Klopp forced to withdraw top scorer Mohamed Salah, Virgil van Dijk and Robertson at various stages during the final.

Van Dijk failed to re-emerge for extra time, although Klopp later claimed the defender suffered a “hurt muscle” but was “fine” while Robertson’s issues appeared to be cramp-related.

Most concerning, though, was the sight of a disconsolate Salah trudging off in the first half, with the Premier League title race approaching its conclusion and just a fortnight before the Champions League final with Real Madrid.

“It was a big blow with Mo going off,” Reds captain Jordan Henderson told BBC Sport.

“But that’s what we’re all about. The attitude to dig deep and to win it on penalties is incredible.

“We’re here to lift trophies, we work so hard all season. It’s a big moment for us, we haven’t come this far, [and been] in this final, for some time, so to win it was special.

“It’s incredible some of the talent we have got and the personalities in the dressing room. You put that together and you win trophies.”

While the destiny of the Premier League title remains firmly in Manchester City’s hands, Liverpool will hope to at least repeat their 2001 feat of two domestic cups and a European trophy.

“We’ve won two so far this season – we have three big games left and hopefully we can win all three and finish the season on a high,” Henderson added.