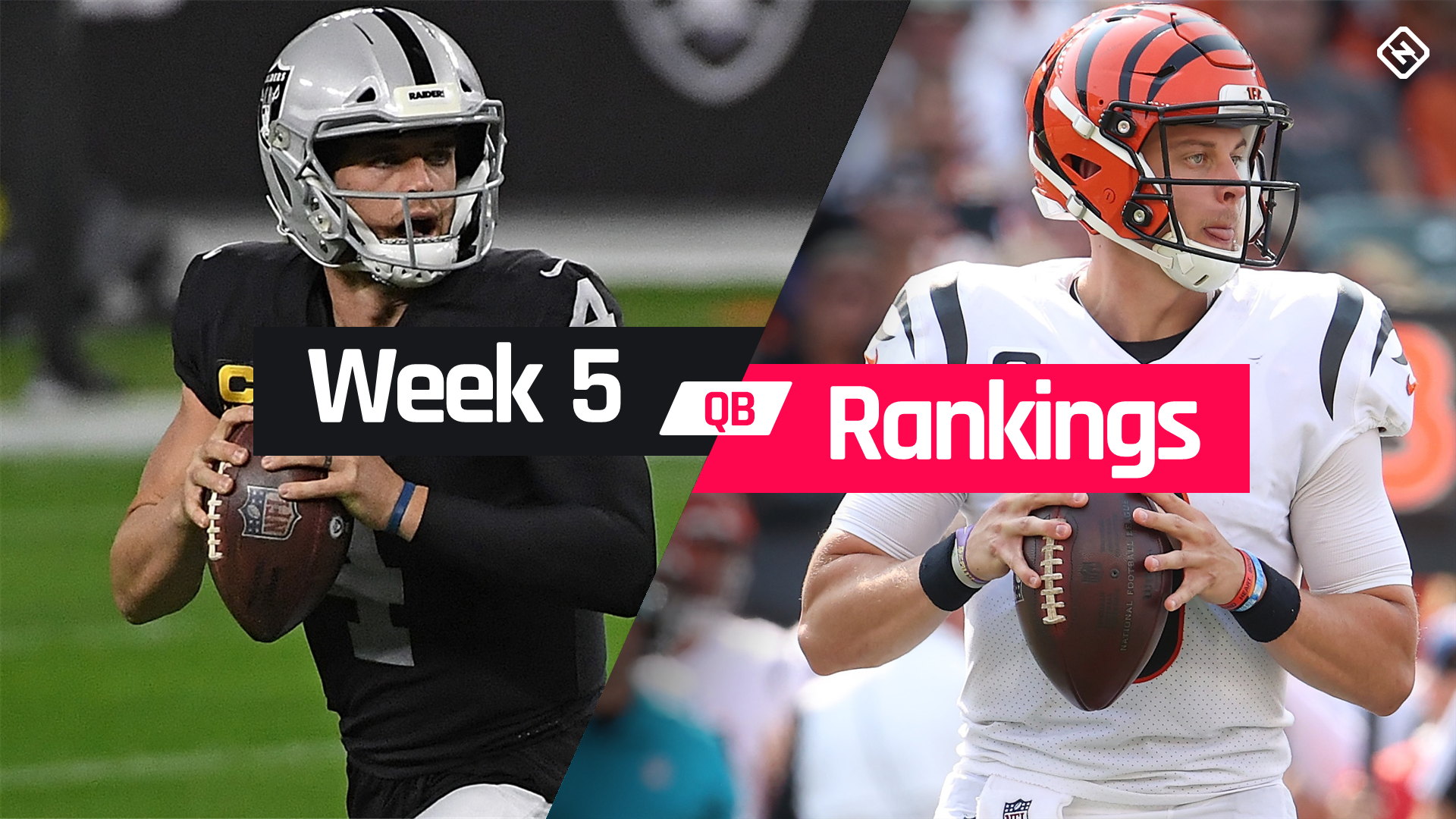 We’re beginning to get a clear picture of who are going to be steady producers and which defenses are susceptible to give up a lot of fantasy points to quarterbacks. We now have a month’s worth of data and stats, so hopefully, our Week 5 fantasy QB rankings will be our best yet, and a certain preseason sleeper joining the mix gets us off to good start.

Trey Lance (@ Cardinals) will certainly be one of the most-watched QBs this week. We got a taste of his upside after he replaced Jimmy Garoppolo (calf) in the second half last week when Lance had 157 passing yards, 41 rushing yards, two TDs, and a two-point conversion. His overall performance was merely average, as most of his production came on a blown coverage and in garbage time, but Lance can still pile up points in a hurry. The Cardinals are a statistically below-average matchup and did a good job holding down Matthew Stafford until he tacked on a late garbage-time TD last week, so we don’t have Lance in our top 12, but he certainly has that kind of upside if things break right. He’s certainly a must-start in two-QB/superflex leagues.

Jalen Hurts (@ Panthers) has continued to feast in garbage time, but he’ll play one of the league’s toughest defenses on the road in Week 5. Russell Wilson (vs. Rams) on a short week could be due for a down game as well, but he’s near-impossible to bench. The same isn’t true for Hurts, but he has similar upside, so bench him at your own risk despite being slotted at 16th on our list.

Some historically middle-of-the-pack quarterbacks have juicy matchups this week. Kirk Cousins (vs. Lions) has a chance to drop another 30-burger if this game stays close; Daniel Jones (@ Cowboys) can drop a nice fantasy stat line whether the game is close or not, and perhaps Sam Darnold (vs. Eagles) can continue his hot start to the season. Joe Burrow (vs. Green Bay) will get his first chance to duel Aaron Rodgers, and this could be a shootout in Cincinnati, so we think Burrow is a QB1 this week.

Rookies Mac Jones (@ Texas), Trevor Lawrence (@ Titans), and Zach Wilson (vs. Falcons) have good matchups, so consider them in play in two-QB/superflex leagues. Wilson gets to play at 9:30 a.m. ET in London, so maybe he’ll shine while nobody is watching. How sweet would it be to sleep in on Sunday, roll out of bed, and see that he has three touchdowns? He’s been awful thus far, but anything can happen against the Falcons.

Matt Ryan (vs. Jets) looks juicy on paper; however, the Jets have actually been solid against quarterbacks. Heading into Week 4, they were allowing the second-fewest fantasy points to the position and held Ryan Tannehill to one TD. You might think this is only because teams have let up on them, but when you dive deeper, their defense hasn’t actually been that bad. Baker Mayfield (@ Chargers) and Teddy Bridgewater (@ Steelers) have exceeded expectations in some weeks, but they’re both on the road with very difficult matchups. There’s a chance Bridgewater doesn’t play, as he’s dealing with a concussion, but Drew Lock certainly wouldn’t be in play either. Justin Herbert (vs. Browns) and Derek Carr (vs. Bears) have been starters most weeks, but their matchups make them tough to trust.

This week seems to have a lot of value in the middle to late parts of the rankings. Some under-the-radar guys have solid matchups, while some of the studs are in tough spots. Most times, you still want to go with the studs, but there’s no harm in considering all options at the quarterback position. This will be the last week for a while without bye weeks, so moving forward, your options will be more limited. Enjoy this while you can.

Note: We’ll be updating these QB rankings as needed throughout the week, so check back for the latest changes and analysis.

Fantasy QB Rankings Week 5: Who to start at quarterback

Rankings are based on standard, four-point passing TD formats.