If you wanted two blokes who know something about playing in the centre position for Brisbane, you could do a lot worse than speak to Steve Renouf and Brent Tate.

The pair managed just shy of 300 games in the job for the Broncos, with plenty of Origin appearances and Kangaroos appearances to go with their illustrious club careers.

And both have a huge opinion of the current incumbent of the position at the Broncos: Herbie Farnworth.

Farnworth, a former Wigan St Pats and Burleigh Bears junior, has been one of the standout players of the early rounds of the 2022 NRL season, with four tries in three games, exploding onto the scene after two years in a struggling Broncos side.

For Tate, it’s not a surprise at all that the 190cm, 106kg is finally proving his value as one of the top centres in the NRL.

“He’s a real good player, I‘ve liked him for a while. I’ve got a massive wrap on him,” said the former Queensland and Australia rep.

“He’s got a real good carry, good feet and he’s strong, but the thing I love most is his willingness to get in the game. He looks for the contest all the time.

“As a centre, you can play games where if you don’t look for the contest you won’t be in the game at all.

“That’s not Herbie: he’s making 10-plus carries a game and looking to compete. That’s a great trait to have.”

It’s the same level of commitment that impressed Renouf, especially with Kotoni Staggs on the other side feeling his way back from a knee injury.

“In the first three games, we’ve not seen the best out of Kotoni because of injuries but with Herbie, you get 100% every week and he’s found the tryline which is a big bonus for a centre,” he said.

“If the boys get a bit tired, he loves having the ball in his hands and that’s such a bonus. He’s not small either so he gives value there too because he can do some good rucks for the forwards.

“The more he gets the ball in his hands, the better for the club: Herbie has shown already how well he can attack, and we’ve seen Kotoni do exactly the same thing.

“The good thing is that they can both bomb the tryline and defensively they’re good too. They’re the best centres we have at the Broncos.”

Tate saw Farnworth at the forefront of a new breed of centres that were coming into the NRL and reclaiming the ‘lost art’ of centre play – especially with the new rules that have seen expansive play rewarded.

“The art of playing centre has almost been lost the last couple of years, with back-rowers stuck in there, but I think now we’re getting young crop coming through and we’re starting to see what a bonus it is to have a strike centre in your team,” he said.

“At the Panthers, Stephen Crichton is one of those guys, and when Kotoni hits form, you’ll see how deadly he can be. Even Valentine Holmes at the Cowboys is giving a new dynamic.

“It’s been a lost art, but we’re seeing how important it can be to have someone like Herbie who can bust the line open.”

Renouf backed his former teammate, Broncos coach Kevin Walters, to be able to make the most of the strike that Brisbane have out wide by getting the ball to Farnworth and Staggs as efficiently as possible.

“With the centres, we’ve often struggled in getting them clean, decent ball from the halves and as a centre, I was spoiled because I was playing outside one of the best five eights in the game in Kevin Walters,” said Renouf.

“He knew how to put the ball into space and I benefitted from that.

“Kev is the coach now and he’ll know how to get the outside backs good ball so that they’re not flat-footed and coming onto it.”

Tate said that getting good service to the centres was vital to the way that the Broncos should be attacking in 2022.

“If I’m Brisbane, it’d be a huge part of my game plan to get the ball to Herbie and Kotoni early,” said Tate, who made over 200 first grade games and is now a pundit with Fox League, covering the North Queensland Cowboys. 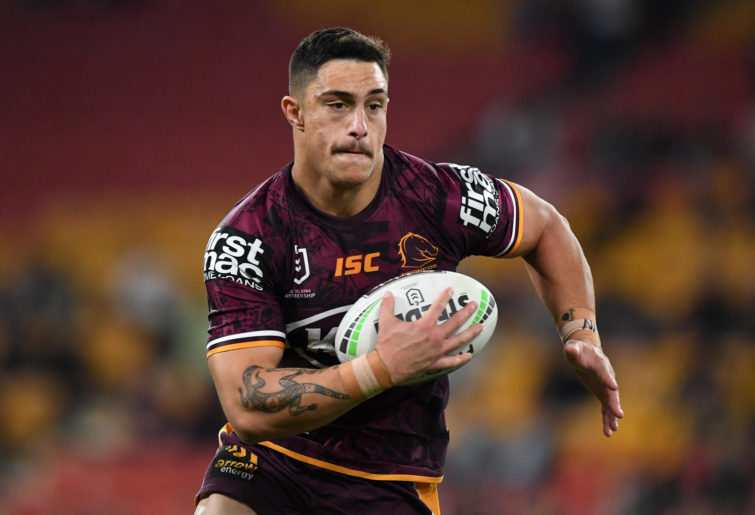 “If I’m Kevvie and the halves, you’re setting up when you’re coming out of trouble to get them early ball.

“You want to bring those guys into the game and you can do that as a half: if you’re feeding those outside guys and they’re doing a great job, your job is done.

“It should be a big part of the game plan to get Herbie and Kotoni early ball and let them do what they do. They’re huge strike weapons for the Broncos.

“If I’m game planning, I’m sitting down with the halves and say ‘get the ball in their hands’. It’s as simple as that.

“You don’t need to create anything for them, you just need to get the ball in their hands with a bit of room and they’ll do the rest for you.”