For Marcus Rashford, the jeers from England’s fans weren’t necessary. He already knew the 0-0 draw with the United States wasn’t good enough.

Certainly not for a team with genuine ambitions of winning the World Cup for the first time since its one and only tournament success in 1966. And not for one coming off the high of beating Iran 6-2 in its opening game in Qatar.

“It’s not a nice feeling, but you don’t need fans to boo us to know we’ve not played as well as we could have,” Rashford said.

“It was a feeling that was mutual in that we could have done better. And it’s not just the players that started — it’s the full group.”

England coach Gareth Southgate described the players as dejected in the immediate aftermath of the USA clash, which was perhaps as much of an overreaction as that of the crowd inside the Al Bayt Stadium.

England is still at the top of Group B and a point against Wales will guarantee qualification. Depending on goal difference, England could still progress to the knockout stage even if it loses that match.

So some perspective is required.

“I feel like if we play well in the next game, then that USA one will be forgotten about and it’s up to us as players and staff to move on as a collective. The best way to do that is by winning the next game.” 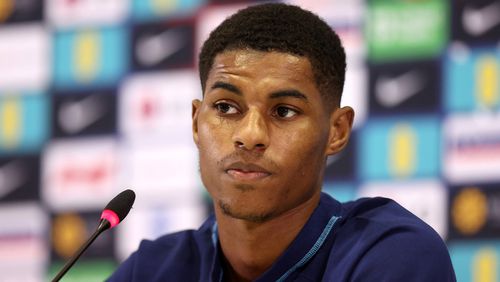 Of course, the reaction to a goalless draw against the United States was nothing like the hate Rashford was subjected to after England lost on penalties to Italy in last year’s European Championship final.

Rashford, Bukayo Saka and Jadon Sancho were subjected to racist abuse on social media after missing spot kicks in the shootout.

Rashford has come through that experience and regained his place in the England squad after being dropped by Southgate.

And if he had to step up to take another penalty at this World Cup?

“As an individual, I’ve always been comfortable and I enjoy being in big moments,” Rashford said.

“I’m hoping that we get to take another penalty in the tournament. I’m looking forward to it.”