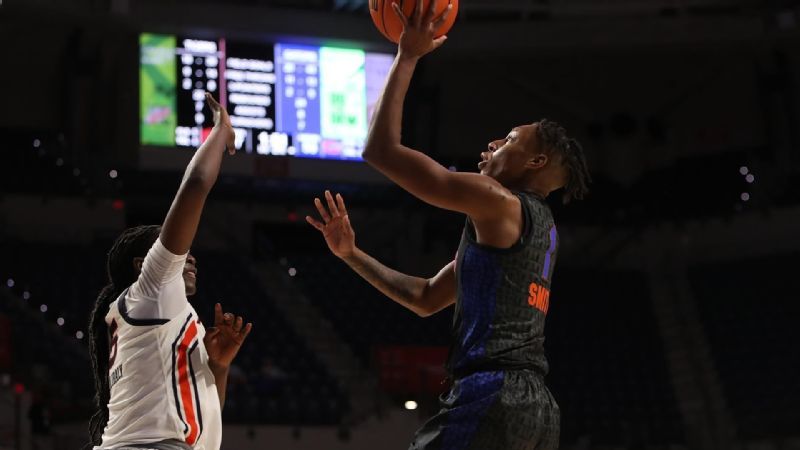 The Gators were led offensively by Kiara Smith who, despite only having three points at halftime, finished the matchup with 19 points, three rebounds, three assists and two steals. Freshman Alberte Rimdal had her best game of the year, tallying a career-high 14 points while Nina Rickards also added 14 points along with five rebounds. Rickards ended a perfect 8-of-8 from the free throw line.

In addition to free throw shooting, bench play played a key role in Florida’s success inside Exactech Arena, as the UF bench outscored the Tigers, 29-9. Rimdal led the effort with 14 points, but Floor Toonders contributed a season-high eight points to spark the offense.

On the glass, Auburn outrebounded the Gators in a nearly even effort, 37-36. Rickards, Toonders and Taliyah Wyche all pulled down five for the home squad, assisting in the team’s 10-8 advantage on the offensive glass.

Auburn was led by Aicha Coulibaly with 24 points, eight rebounds and a block.

Entering the third quarter with a 54-48 lead, the Gators would struggle from the floor to start the final frame. Auburn’s defensive intensity turned up at the beginning, boosting the Tigers to a 9-0 start for a 57-54 advantage with 4:20 on the clock. Smith put an end to the run 12 seconds later, blowing past the defense for an easy bucket to pull UF back within one.

The Tigers again extended the lead to three with 3:37 left in the game, but momentum would swing back seconds later after Coulibaly committed a foul against Wyche with 2:47 remaining. The Auburn standout, following the foul, received a technical foul, putting Nina Rickards on the line for two free throw makes, again pulling Florida within one.

Despite the setback for the opposition, Auburn would extend the lead to three twice more, owning a 63-60 lead with just over two minutes in the game. It would again be Smith to the rescue for Florida, as the graduate again slice through the lane for a layup to close the gap to one. The Gators got a key stop on the next Tiger possession, before Smith was fouled driving down the court. Two free throws later, the game was back in favor of Florida, 64-63.

Rickards would put the nail in the coffin for the Orange & Blue, going 4-fo-4 from the charity stripe over the last 20 seconds to seal the Gator victory.

Despite the close finish, Florida maintained control of the game for the first three quarters. Auburn opened with a 4-2 led in the first quarter before an 8-0 run, capped off by a Smith jumper, gave the Gators a 10-4 advantage at the first media break. The Tigers managed to managed to stay within four for much of the opening period, but a Kristina Moore triple and Rimdal pull-up pushed the UF lead to 21-12, eventually pushing Florida to a 21-14 advantage after one.

The Orange & Blue would open up a 13-point lead following an 8-2 spurt in the second quarter, spurred by five from Rimdal, with 4:06 left in the half. Auburn responded with an 8-0 run of their own, but a Toonders layup and Rickards jumper as time expired gave the Gators a 37-30 halftime advantage.

Wasting no time in the third frame, Auburn pulled within one with 6:41 on the clock thanks to an 8-2 run of their own. The Tigers and Gators would exchange buckets before an eight-point answer from UF pushed the lead back to 52-43 late in the quarter. Smith would score eight of the final 12 points in the quarter for UF, giving Florida a 54-48 lead before the dramatic finish in the fourth quarter.

Florida women’s basketball will be back in action on Sunday, Jan. 16 when they head to Tuscaloosa, Ala., for a matchup with Alabama.

On tonight’s effort… “I think that it was fun to play in our black uniforms and I was proud of our effort. I think we played against a really competitive Auburn team that we knew was going to be talented and gritty, and in order to get the win like we had hoped for, we knew that we were going to have to grit it out. It’s not always pretty but I was impressed with the plays we made during the late game stretch and some players stepped up in big moments to make big plays, and that’s the sign of a good team. I think a lot of teams can rollover in those moments when really almost nothing seemed to be going our way. So, for those reasons I was really proud of our effort tonight.”

On how they came together for a win… “We made it happen. I personally don’t really believe in luck. I think you make things happen and we talk a lot as a program about underneath every feeling there’s a choice. Tonight, we were very aware of the feelings that we were having. In many moments there was frustration, we were getting to the hole, we were not making the shot. We were getting the wide-open pull up or the extra-pass three and it wouldn’t go down. But the choices that we made late were to own the things that we could control. We did that and I think that’s why the result ended up as it did tonight.”

On trust in Kiara Smith… “…Kiki and I have spent a lot of time in the gym together. So, I trust her decision making. Our coaching staff and her teammates trust her decision making and I felt like if she felt like the right thing to do would be to call a timeout, that’s what she would’ve done. She’s one of the most creative open-floor players in our league. When she can get the ball and transition with a numbered break, our fives do a tremendous job of setting those drag screens for her, and our other guards, with their angles and their selflessness. Their willingness to do that makes our team so much better. Their ability to move off of her, based on the read that she wants to make, I mean it is like a really cool dance to watch when you know what you’re watching. Even Taliyah as a freshman for her to empty out and know that Kiki has the advantage to her left right there, that was a big-time play and a big-time moment, but that’s what we expect of her. We feel like she’s one of the best open-floor players in the conference, one of the best point guards in the country and we trust her decision making in those moments. So no, I wasn’t going to call a timeout.”

On matching last year’s win total… “Honestly, we just take it game by game. We focus on ourselves, and we understood, especially coming into conference, the competition was going to be way more competitive, a lot tougher, and we grasp that every day in practice and we use that, and we are just working on ourselves each and every day. To play with all of these players, we like playing for one another, we love playing for coach Kelly and the rest of our staff. It’s just fun to be around and we’re having fun with it. Having fun takes a lot of pressure off because you have fun with it plus you enjoy playing with who you’re playing with and who you’re playing for. Bringing all of that together with our talent just shows what type of team we are.”

On if she ever doubted their ability to come back and win… “No. I never doubt anything. I think that we talk more about ourselves, we talk about not looking at the scoreboard, not looking at the time. We take one possession at a time. We understand that we need to get score and we need to get stops. That’s how the game of basketball goes. Each team is going to have a run and we knew that our run was going to come. We just kept our heads up, shoulders back, and we played.”

– Florida won their fourth-consecutive game over Auburn with the victory.

– The Gators have now matched their win total from a season-ago with 12 on the year.

– The 87% effort from the charity stripe was the best of the season when shooting at least 20 free throws.

– With 14 points, Rickards was just one off of her season-best against Georgia.

– In the record books, Smith advanced to 10th in school history with 289 made free throws.

– After recording two steals, Smith is tied for seventh in school history with 193 career steals.