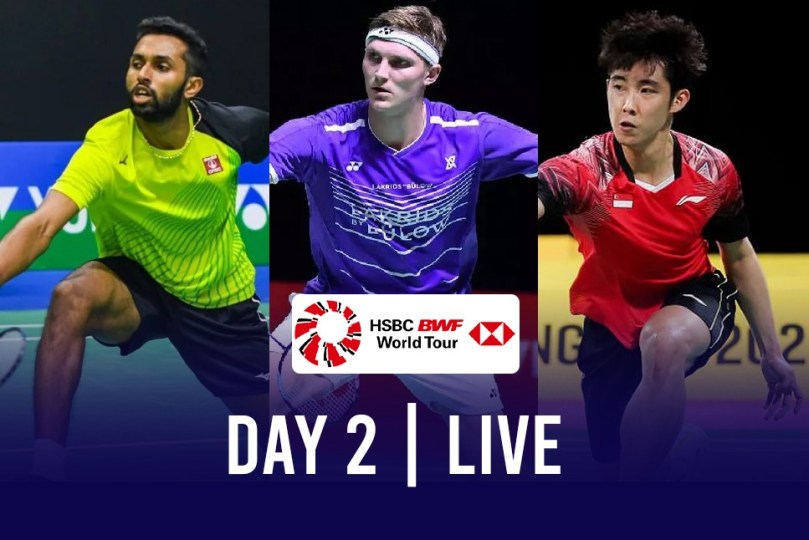 Badminton World Tour Finals LIVE – Prannoy vs Guang Zhu @ 2.30 PM: Indonesia’s Anthony Ginting has booked a spot in the semifinals of the BWF World Tour finals. Ginting, who is the seventh seed in the tournament, defeated Chinese Taipei’s Chou Tien Chen 14-21, 21-12, 19-21. Meanwhile, India’s HS Prannoy aims to bounce back after a loss in his first group encounter. He will face China’s Lu Guang Zu today in his second group match. For Prannoy this will be Make or Break battle as defeat will almost end his journey at BWF World Tour Finals. Currently, Chinese Taipei’s Chou Tien Chen is in action against Anthony Ginting.  Meanwhile, World No.1 Viktor Axelsen will play Japan’s Kodai Naraoka in 2nd GROUP encounter. Follow InsideSport.IN for more updates on BWF World Tour Finals 2022.

In the other GROUP, Anthoy Ginting and Koh Kean Yew will also look to get second successive victories in the tournament.

6-2 to Christie, Christie makes a good start as he takes four points on the trot to go up 6-2.

Meanwhile, debutant Loh Kean Yew aims to extend his win streak as he faces Jonathan Christie. Christie suffered a defat in three games against his compatriot Anthony Sinisuka Ginting in his previous encounter. HS Prannoy is also looking to stay alive as he takes on China’s Lu Guangzu. Guangzu too lost his first match against Viktor Axelsen. Axelsen on the other hand faces Japan’s Kodai Naraoka in the upcoming contest.

China’s He Bing Jiao, Indonesia’ Gregoria Tunjung, Thailand’s Ratchanok Intanon and Japan’s Akane Yamaguchi are aiming to continue their winning momentum in the tournament. He Bing Jiao takes on Intanon, while Akane Yamaguchi will be up against Chen Yufei.

Meanwhile, Tai Tzu Ying who suffered a defeat in the first match will be facing Thailand’s Busanan Ongbamrungphan. Gregoria Tunjung, who defeated Chen Yufei will face South Korea’s An Se-young.

The ‘Daddies’ Ahsan/Setiawan 🇮🇩 clash with Chia/Soh 🇲🇾 in a replay of the World Championships final. #BWFWorldTourFinals #Bangkok2022 pic.twitter.com/JUwUlAD7GT

In the first match of the Women’s Singles, South Korea’s An-Seyoung defeated Indonesia’s Gregoria Tunjung in three games 21-9, 11-21, 21-10. Se-young started off the match with dominance as she raced to a 11-4 lead in the first game and closed it out by winning it 21-9. While Se-young was expected to dominate in the next game, Tunjung made a comeback

In the Men’s Doubles, Japan’s Hoki Takuro and Kobayashi Yugo will face a tough contest against Indonesia’s Fajar Alfian and Mohammad Ardianto.  Malaysia’s Choi Sol Gyu and Kim Won Ho will be up against their compatriots Ong Yew Sen and Teo Ey Yi.

In mixed doubles, local interest will focus on Dechapol Puavaranukroh/Sapsiree Taerattanachai will face Tan Kian and Lai in their second group encounter.

The BWF World Tour Finals can be watched LIVE in India on Sports 18 and Voot Select App.