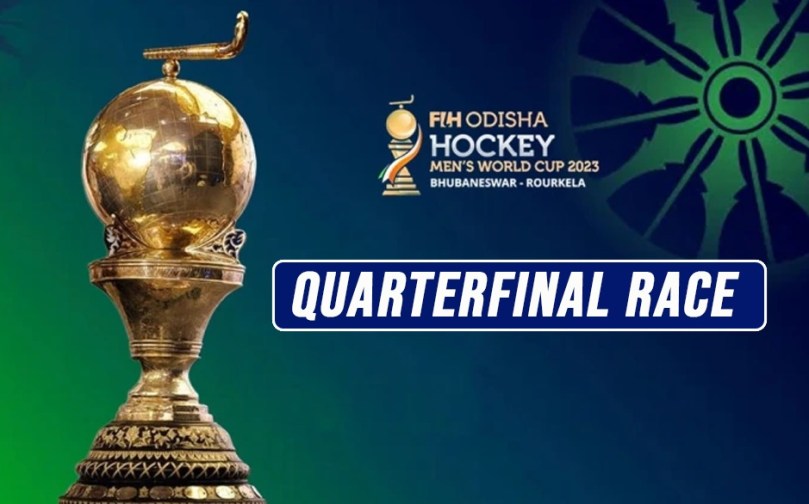 Hockey WC Quarterfinal RACE: Australia with a thumping 9-2 win over SouthAfrica have confirmed their spot in the quarterfinals. Australia join Netherlands…

Hockey WC Quarterfinal RACE: Australia with a thumping 9-2 win over SouthAfrica have confirmed their spot in the quarterfinals. Australia join Netherlands and England in the QFs. However, 5 teams are still in fray including India. Top teams from each group will earn a direct QF spot. The second and third-placed teams in each group will go through Cross-Overs or pre-quarterfinal round. While Belgium have virtually sealed their spot in quarterfinals, they will have to depend on Germany vs Korea result. Follow Hockey World Cup 2023 LIVE updates on InsideSport.IN

Teams who are in Quarterfinals:

Teams that have qualified directly

So far only England and Netherlands have earned a direct qualification to the quarterfinal stage. Netherlands topped the Pool C with nine points on the board after the group stages. The Dutch men won all their three group matches and have dominated so far.

Meanwhile, England finished on top of Group D. They finished the group stages with 2 wins and a draw and secured 7 points. India too finished with the same numbers. However England managed to pip the hosts as they had a better goal difference.

Australia with a thumping 9-2 win over SouthAfrica have also sealed their QF spot.

Netherlands register the biggest ever win at an FIH Hockey Men’s World Cup by scoring 14 unanswered goals against Chile. #HWC2023

Hosts India missed the direct entry to the quarterfinal by a whisker. The team led by Harmanpreet Singh won two group matches, while their contest against England ended in a draw. They ended the group stages with 7 points on the board and equalled England’s tally however an inderior goal difference made them finish second in their pool. They will now face New Zealand in the cross-overs.

New Zealand didn’t have a great time in the group stages. They registered just a solitary victory and finished third in their pool behind Netherlands and Malaysia. They have now earned a spot in the cross-overs and will face a big challenge against India in order to qualify for the quarterfinals.

Spain meanwhile secured the third spot in Pool D. They managed to register just a solitary victory in the group stages against Wales. The eighth ranked side in the world will now face Malaysia in order to seal a spot in the quarterfinals.

Malaysia have done well in the group stages. After losing their first group game 0-4 against Netherlands, they made a good comeback with a win against Chile. They also stunned a higher-ranked New Zealand with a 3-2 win. The Malaysians will aim to continue their good show against Spain in the cross-overs.

Six teams will battle for two direct quarterfinal berth. The final group stage matches in Pool A and Pool B will decide the quarterfinalists. The teams in contention are Australia, Argentina, France, Belgium, Korea, Germany. The matches will be played on 20th January, Friday.