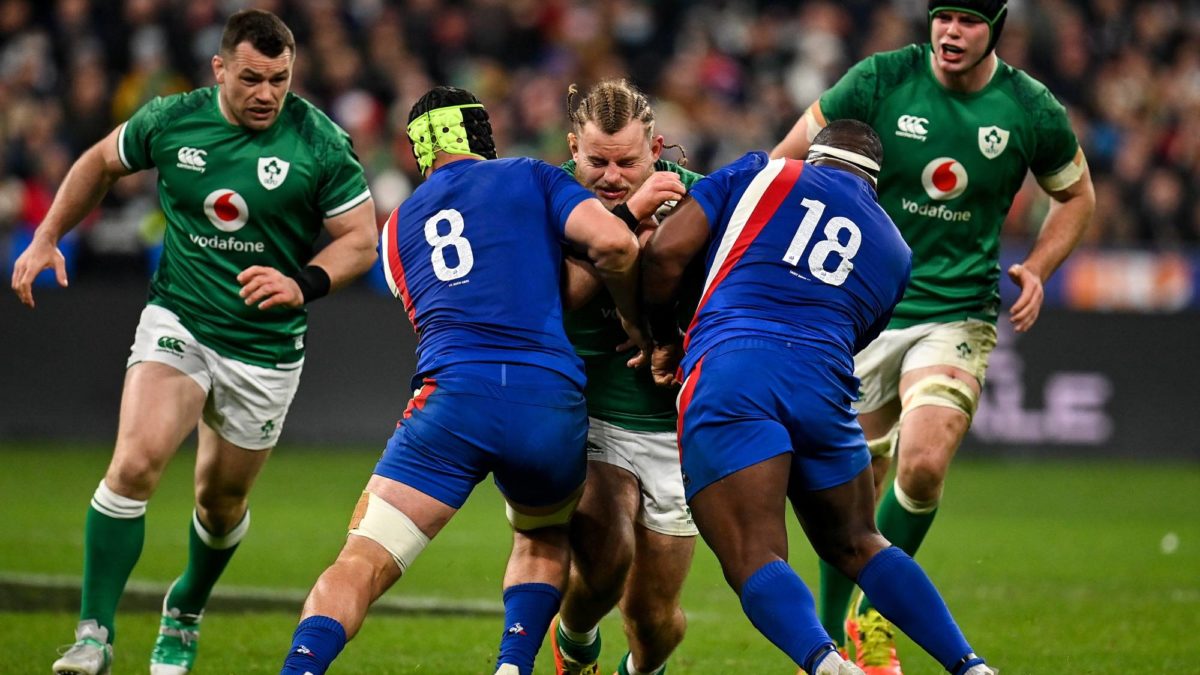 Round two of the 2022 Six Nations saw some thrilling games with Wales fighting back to defeat Scotland and France going head to head with Ireland in a gorgeous Test to watch, while England got their championship back on track without conceding a single point against Italy.

So there’s no surprise that there’s lots to talk about. So let’s get stuck in.

Eddie Jones called his subs the ‘finishers’ earlier in his England career and said they were a crucial part of his game plan and French coach Fabien Galthié seems to believe exactly the same thing.

Except his version seems to come in one size – BIG! Against Ireland, Galthié’s Bomb Squad included the likes of Dylan Cretin, Jean-Baptiste Gros and Demba Bamba who all caused Ireland problems once they came off the bench. Their huge frames and ability to fit perfectly into the French style of play made it so hard for Ireland to create genuine scoring opportunities

At the end of 2021, France beat the All Blacks with an 80 minute level of intensity that few if any sides in the world could cope with. Against Ireland they were able to deliver the same consistency of power and intensity and the Irish just couldn’t handle it. 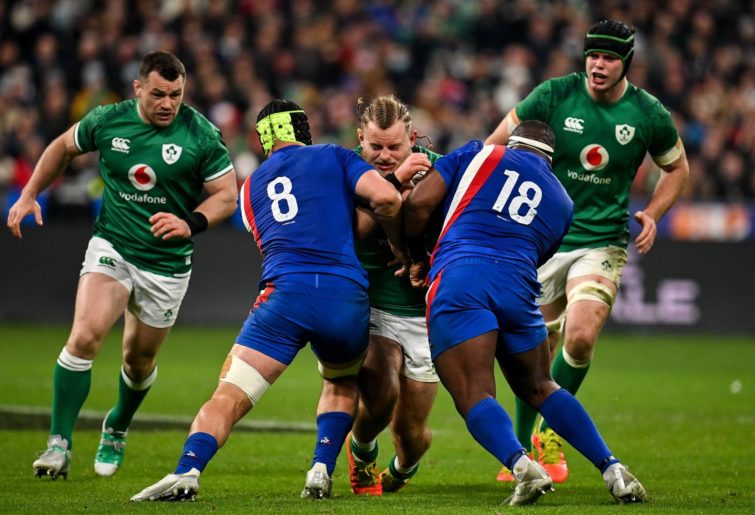 No way through. (Photo By Seb Daly/Sportsfile via Getty Images)

While the Irish fought back valiantly after going down 10-0 after seven minutes, and enjoyed long periods of possession in the game, the French defence just kept hammering away at the ball runners and made it impossible for the men in green to settle into the same sort of rhythm that they used to destroy the Welsh just a week ago.

Playing with intensity for periods of the game is one thing but one of the aces up Galthié’s stylish sleeves, is this Bomb Squad who he can bring off the bench and trust to maintain if not raise this level and keep crashing into the opposition as they tire.

The Bomb Squad should worry every coach because it’s not just power that they bring – they have also shown that they can play within the same structure that the starting XV has been working to. Often subs struggle to do this and it causes teams to be less effective in the crucial closing periods of a Test. Not so with France, and a Grand Slam just got one step closer.

France show the rest of the competition how to beat Ireland
Although they lost on the weekend in Paris, Ireland didn’t play badly. They actually played pretty well but they just weren’t allowed to play to their best by a French side that had figured out how to nullify their opponent. In doing so, the French not only beat arguably their biggest rivals for the Six Nations title, but they also gave the likes of England and Scotland the recipe that might help them beat Ireland too.

The Irish game plan against the Welsh relied upon both incredibly quick ball at the ruck, and then a number of players being ready to take the pass from the scrum half with plenty of options to pick from – run it up themselves with the support of their pod mates, pass it short or pass it longer and stretch the defence. This was all done at pace and the Welsh struggled to reorganise in time to maintain any sort of effective defence as wave after wave of Irish attacks came at them.

The masterstroke from Galthié was to have his side not compete at every ruck. While this gave Ireland the quick ball that they needed, the French defence hadn’t committed men to the breakdown and instead were rushing up fast on the Irish ball players allowing them no space or time.

As a result, the Irish had the majority of the possession but could not make it count in the same way that they did against the Welsh in round one. Last week they turned roughly the same amount of possession into 520 running metres – against France they could only manage 350 metres and could not get any decent time inside the French end of the field.

Of course it’s not as simple as “don’t compete at the ruck and we’ll beat Ireland” and there’s other reasons why Ireland lost (more on that in a second) but the decision to give Ireland quick ball at the ruck meant fewer French defenders were sucked into the breakdown and were ready to hit the Irish attack hard and fast.

Are Ireland lacking leadership when Johnny Sexton is missing?
As already mentioned, Ireland played well against France and losing by only six points against this French side in Paris doesn’t mean that they need to go back to the drawing board. However, with Sexton out they did seem to be missing some crucial experience and leadership that cost them.

In the first half the French tactic of not competing at the breakdown disrupted their game plan and they didn’t do anything to adjust until after half time.

In the 73rd minute, with the Irish down by six points, stand-in skipper James Ryan opted to go for three points instead of the corner and the try that would see them take the lead.

In the final moments of the game – with Ireland needing a converted try to win – full back Hugo Keenan kicked the ball away when the Irish had no other option than holding onto the ball and desperately trying to find a way to score their fourth try.

Ryan’s decision in particular has drawn a lot of attention and criticism. Ireland had really struggled to get into the French 22 throughout the game, especially in the final half hour of the Test and the French had been very disciplined all night long giving away just seven penalties. So for Ryan to take the three points and hope that his side would get another scoring chance in the final six minutes smacks of an opportunity missed that a more experienced skipper wouldn’t have given away.

We’re excited to announce the launch of The Roar Rugby Podcast co-hosted by our experts Brett McKay and Harry Jones and featuring some special guests. You can check out the trailer below and the guys will be back for a full Super Rugby preview on Wednesday.

Can Scotland win games when they are the dominant team? It doesn’t seem so yet
After their first round victory over England, much was said about how Scotland had found a way to turn potential into results and that they could even be a dark horse for challenging for the title this year.

After a tight loss to Wales this weekend though the same old questions have been raised and Scotland’s players and coaches will have to go back and figure out how to find a way to win when they are the dominant side.

Wales played much better this week than last but they still are not a top tier side and Scotland should have won this game but their discipline and best players let them down. For the second week in a row they gave away 13 penalties and gave Wales too many opportunities to relieve pressure and gain territory.

Equally as frustrating as the lack of control would have been how key players – especially Finn Russell – just didn’t stand up and play to their impressive potential. Stuart Hogg and Hamish Watson were both good but not great and Liam Williams put his hand up to remind many that he’s arguably as good at fullback as the much loved Hogg. Russell struggled to breakdown the Welsh

Combine all this with 11 turnovers conceded and Scotland will watch the replay of this game and realise that it was their own mistake and inaccuracies that cost them the chance to win in Cardiff for the first time in 20 years.

They’ve lost some wind from their sails and have to play France in week three meaning their win-loss split is going to go the wrong way very soon. Scotland are still a good side but they need to be comfortable playing as favourites and be able to deliver top performances when they aren’t viewed as the scrappy underdog.

Mack Hansen makes France look silly
France started at breakneck speed and had a 10-0 lead after just seven minutes. Ireland needed a quick and special response to get back into the game and Mack Hansen found the perfect solution.

As Ireland restarted from the half way line, Hansen set off after the ball as it hung high in the Paris air. While two French players played a game of “Your ball!” Hansen leapt through the air and took a beautiful catch before sprinting away to score unopposed.

It wasn’t the only good thing that Hansen did during the game and the winger is quickly becoming a key part of Ireland’s game plan. He ran for over 72 metres – more than anyone else in the game other than his team mate Keenan – and often offered an extra ball carrying option as Ireland looked to break down the French wall.

He did give away the ball a couple of times as the big French players were able to turn him and he’ll need to get better at protecting the ball if he’s going to keep being that ball carrying option but Hansen has grabbed his international chance well and will continue to be a real threat in this tournament.

Eddie Jones relieved but still a long way to go for England
A 33-0 win over Italy unsurprisingly comes with plenty of positives and England should not ignore the fact that Marcus Smith and Harry Randall both played very well, Jamie George was like a sniper at the line out and Alex Dombrandt combined his power running with good work in the loose to steal three turnovers.

However there are still some concerns for England that will be really bugging Eddie Jones. Ben Youngs is really not fast enough either with his pass or his footwork to compete at the top Test level and the subs in general – Eddie’s Finishers – disrupted England’s fluency and added very little fresh punch or creativity.

The French Bomb Squad don’t just provide a set of fresh legs – they add in their own skills as well as being able to deliver the same French game plan as the starting XV. The English Finishers however lost line outs, kicked the ball poorly and slowed down the English attack giving the Italian defence much more time to rush up.

Add to that 12 penalties conceded and 20 turnovers given away by England and teams like France, Ireland and even Wales will be thinking that England are ripe for the plucking. 13 of those turnovers came from the English backs with the wings and centres struggling to hold onto the ball. They are just not strong enough or big enough to be taking the ball into strong defensive walls as ball carrying options and teams will know that they can target the English midfield and cause chaos.

The teams have a week off now before round three where Scotland will be desperate to find a way to overcome France and England will welcome a resurgent Wales to Twickenham. France should take another step towards a wonderful Grand Slam while England will hope that they can keep some sort of pressure up on them with a win at home.