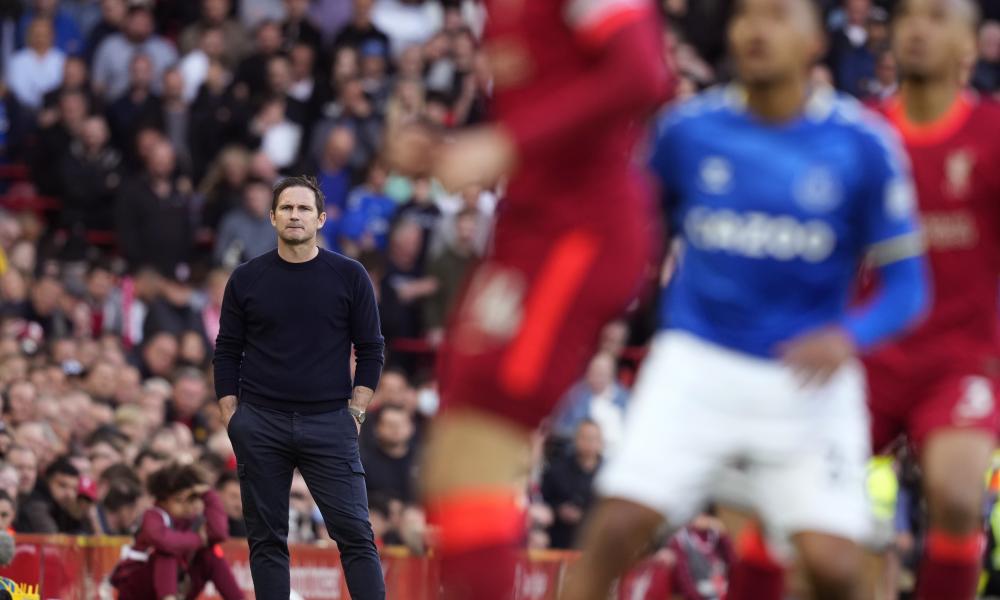 Frank Lampard has no intention of quitting Everton even if the club suffer a first relegation since 1951.

Everton have six games to save their Premier League status, starting with the visit of Lampard’s former club Chelsea on Sunday, and would be five points adrift of Burnley by kick-off if their relegation rivals win at Watford.

The Everton manager remains focused on survival, and therefore reluctant to consider or discuss the possibility of relegation, but confirmed he intended to remain in the job beyond this season. “I am very committed,” said Lampard, who succeeded Rafael Benítez on 31 January. “I really don’t want to get into the headlines, or ins and outs of that, but absolutely [I am committed].”

Asked whether he would manage an Everton team in the Championship, Lampard replied: “I don’t want to get drawn on that question but what I will say is I have loved every minute of being at this club. Sometimes people from the outside ask me, because of the position we are in: ‘Are you enjoying it, with all the pressures of it?’ I absolutely love it.

“I have been welcomed incredibly well by the fans and supported by them and I will do everything to get this club back to where I want it to be. I’m not going to jump into the future because it’s not worth it but, in terms of my dedication to this job, I will give it absolutely everything for as long as Everton want me here and I can get them to where I think we can get to.”

The Everton manager has defended Anthony Gordon after fierce criticism of the 21-year-old’s performance against Liverpool last weekend, when he was booked for diving and had a strong penalty appeal denied by the referee Stuart Attwell.

Lampard said: “I don’t think it is the case [that Gordon goes to ground easily]. I think Anthony’s booking was the first in his senior career for simulation. If you look at attacking players in the league, fast players who change direction quickly and then the defender sticks their leg out and makes contact, I think you could find many clips that look similar.

“Whether it’s a penalty or not – I’m not going to sit here and say it’s stonewall – but there is definitely contact. The second half one is a penalty in my firm opinion, although it won’t be everyone’s opinion. Anthony was ahead of the defender [Joël Matip], the defender stepped on his foot and gave him a push.

“I think it’s unfair to put that on Anthony. Anthony is a great kid. He is very similar to Mason Mount in his attitude, his application and his talent levels.”