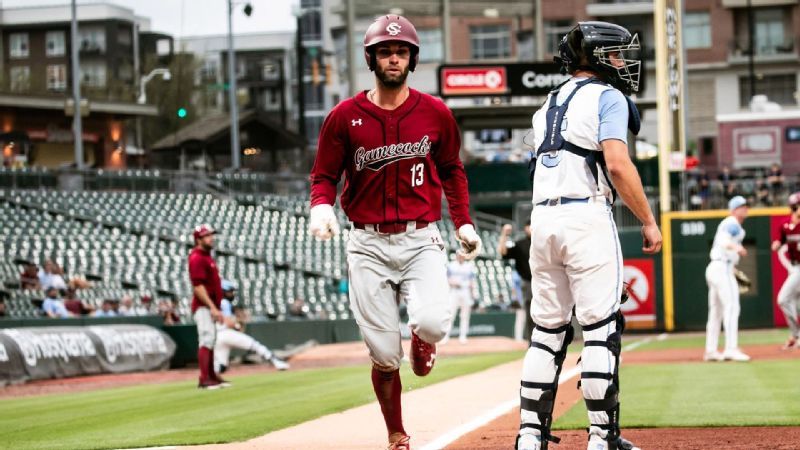 CHARLOTTE – The University of South Carolina baseball team scored six runs in the first three innings and added a seven-spot in the ninth, cruising to a 15-2 win over No. 22 North Carolina Wednesday night (April 6) at Truist Field.

Brandt Belk led off the game with a double. He would score on a double play groundout. Then in the second, Belk drove in a pair with a single to right. Jack Mahoney made it 6-0 as he belted his first career home run to the stands in left center.

Carolina added a pair in the fifth as Kevin Madden scored on a passed ball and Colin Burgess brought in a run with a single up the middle. UNC scored single runs in the sixth and seventh frames, but the Gamecocks erupted for seven runs in the ninth. Carolina sent 12 men to the plate in the ninth and had seven hits in the frame. Elijah Lambros drove in a pair of runs, while Braylen Wimmer, Andrew Eyster, Matt Hogan, Jalen Vasquez and Evan Stone each had an RBI hit in the seven-run inning.

Aidan Hunter earned the win for the Gamecocks. He struck out six in four innings of relief, allowing three hits and a run. Carolina used six pitchers on the night as Eli Jones earned the start, pitching a pair of scoreless frames.

Wimmer had three hits to lead the Gamecocks, while Belk and Eyster had two hits apiece. Ten different players had hits for Carolina in the win.

The Gamecocks host No. 14 Georgia for a three-game series starting Friday night (April 8) at 7 p.m. at Founders Park. The game will be on SEC Network Plus.