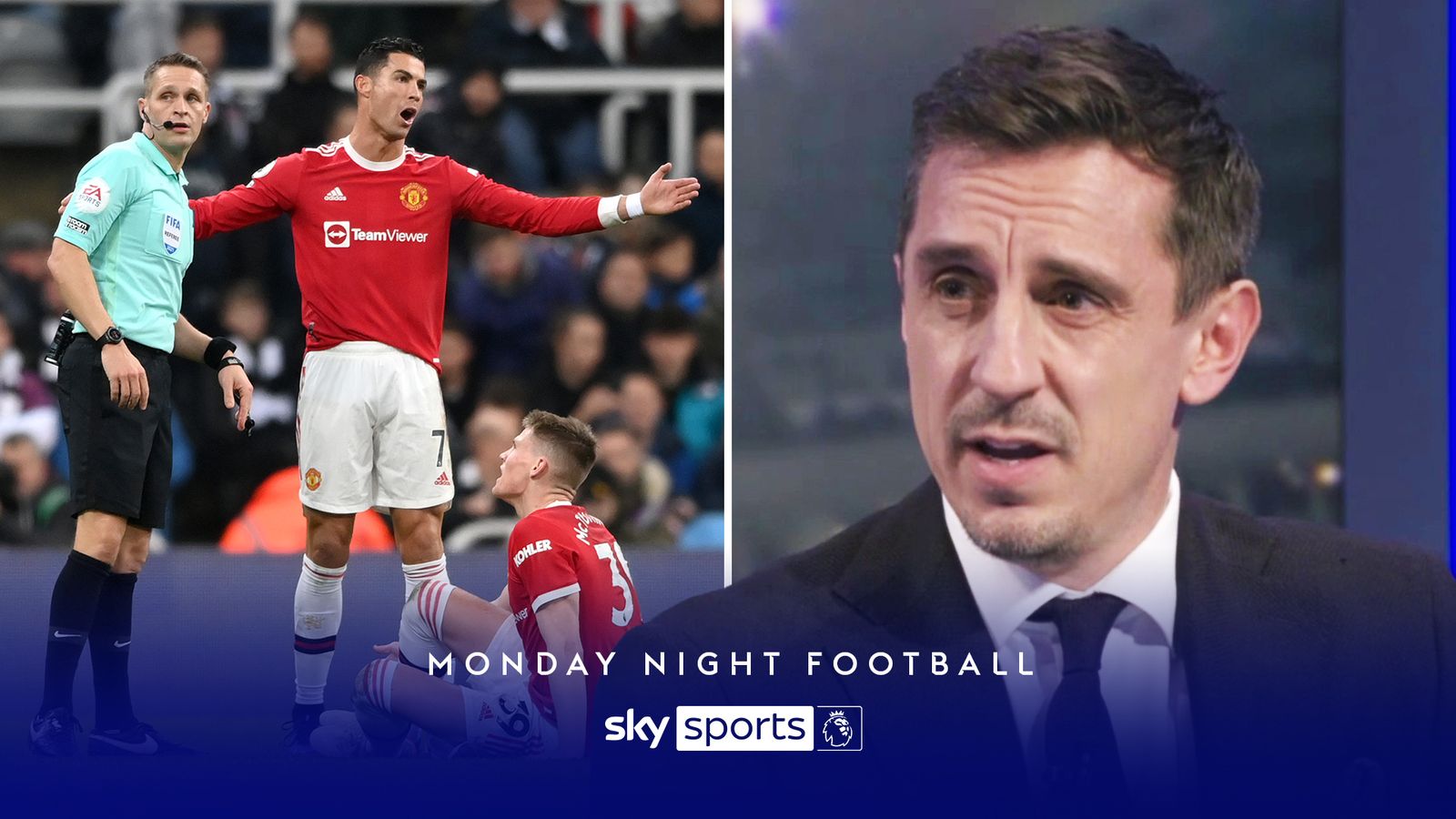 Gary Neville condemned Manchester United’s performance at Newcastle as “a mess” after describing Ralf Rangnick’s team as “a bunch of whingebags” during a withering half-time assessment.

United were second best against second-bottom Newcastle throughout the game with Edinson Cavani poking in a 71st-minute leveller for an undeserved 1-1 draw.

Newcastle then hit the post as the home team continued to pose the greater attacking threat even with star forwards Callum Wilson and Allan Saint-Maximin forced off with injury.

“That was a mess in the second half, in terms of formation, style – it was desperation,” Neville told Sky Sports’ Monday Night Football at full-time.

“It was really worrying. I think there will be a lot Rangnick hates about that performance.”

United, playing for the first time in 16 days, fell behind within the opening 10 minutes when Saint-Maximin fired past David de Gea. The forward then spurned a glorious chance at the start of the second half before De Gea made a superb late save to rescue a point for the visitors.

Neville had been scathing in his criticism of the visitors at half-time, repeatedly describing the United players as “whingebags”.

“They’ve not done one single thing right as a team, and not one single player can go in and say they’ve done their jobs, or even done themselves justice,” said Neville. “There were no positives. Nothing.

“They’re whinging at each other! They’re a bunch of whingebags! A bunch of whingebags! Watch them on that pitch, honestly, arms in the air, complaining about everything! Honestly, they’re absolutely shocking out there in that first half. They got the last manager the sack! Ralf Rangnick is not going to get the sack, he’s only had a few weeks with them, but honestly, they’ll get a lot of managers the sack, that lot, if they carry on like that.”

After the game, Neville added: “Something isn’t right in there. I don’t know what it is, but there is definitely whinging going on – they are all at each other and not helping each other.

“The spirit of a dressing room is really important and I don’t think they’re all with each other at this moment in time.

“There’s a leadership struggle going on. Harry Maguire is the captain but he doesn’t feel like the captain.”

Cavani was introduced as a half-time substitute in place of Mason Greenwood and was one of the few United players to make any sort of positive impression on proceedings.

Cristiano Ronaldo was quiet, but it was the striker’s muted response at the final whistle which particularly bothered Neville.

He said: “We talk about body language and we talked about it earlier in the season when Ronaldo ran off at the end of the Everton game. He’s run off again tonight. He ran off at Watford, when everyone knew the manager was going to get the sack. And at Norwich.

“And there’s (Bruno) Fernandes’ whinging too.

“They’re the two senior players. It’s devastating for younger players when the two best players are looking at every other player like they’re not good enough.

“Cavani takes that away. I don’t think Cavani wilts in the presence of Ronaldo or Fernandes, I think he stands up to them and helps other young players on the pitch. He needs to be on the pitch.

“I don’t care how you’ve played, You need to go over and clap the fans at the end of the game. Get over to them, particularly when you’re the best player in the world, and one of the greatest of all time.

“It’s annoyed me for about two months. The best players in your team…it’s devastating when they’re showing that look and body language to the younger ones.”

Neville had expressed his reservations prior to the game about Rangnick’s preferred 4-2-2-2 formation and those concerns were entrenched by United’s problems at St James’ Park.

“The 4-2-2-2 has been a struggle from an attacking point of view but l also thought that against Norwich [in United’s previous game] that there were signs you could isolate Manchester United’s full-backs.

“I felt for Diogo Dalot tonight. He was exposed at times but he stuck to his task. But let’s be clear, the two centre-halves for Man Utd were absolutely atrocious. Harry Maguire is having a nightmare season and (Raphael) Varane is only just coming back into it.

“I don’t know any team in Europe that plays this system really well. It’s a massive ask on the full-backs.”

Speaking after the game, Rangnick insisted the biggest issue on Monday was their lack of physicality, not their body language.

“I think in the second half we showed a reaction, the way we prepared the goal and Edi converted the chance. We had another two where Edi could have scored, that could have even been the winning goal, but on the other hand we must admit today we won a point, we didn’t lose two, we won a point having been a goal down.”

He also told Sky Sports: “I didn’t like the performance at all. Today we didn’t control the game apart from very few moments. It’s all about energy, physicality and who wins the second balls. In all those areas we weren’t at our best. The good thing is we got a point but the performance needs to be better.

“It’s about physicality and energy, you have to be ready and able to win those direct duels and this was not that often the case. When we were in possession we had too many giveaways and, even with the goal, that doesn’t make things easy.

“I don’t think body language was our biggest problem today. Our biggest problem was the mistakes we made. Even when we scored the equaliser we were not really controlling the game and taking the wrong decisions.

“We can do better, I know the players can, but we have to do it. We shouldn’t look for excuses – we need to be better and get more physical. I was not happy with our performance with the ball or when we had to press. It’s about what kind of energy mode we play with the ball and without the ball.”