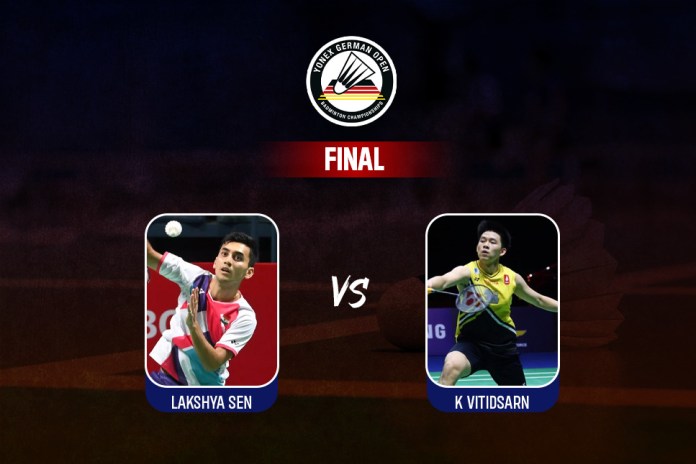 German Open Badminton FINAL LIVE: Lakshya Sen vs Kunlavut Vitidsarn World Championships bronze medallist is eyeing to win the German Open title after a resounding performance against World No.1. He defeated Viktor Axelsen in 3 sets to set the final clash against Kunlavut Vitidsarn of Thailand in the finals of the tournament. He will now be looking to win another silverware after clinching the India Open earlier this year. Follow Lakshya Sen vs Vitidsarn LIVE updates on InsideSport.IN

On the other hand, 20th ranked Kunlavut Vitidsarn will be keen to defeat Lakshya Sen after claiming wins against Parupalli Kashyap and World No.8 Jonatan Christie. World No. 12 Lakshya Sen will be looking to avenge the loss to Kashyap in the opening round.

Lakshya Sen will face off Vitidsarn for the third time in his tennis career. The duo had last met each other in the same tournament last year where Lakshya Sen emerged victorious. In the other game, Kunlavut Vitidsarn had thrashed Lashya Sen at the 2019 Orleans Masters in France.

German Open Badminton LIVE – Lakshya Sen enters FINAL: India’s pride Lakshya Sen defeated World No.1, Viktor Axelsen, in the semifinals. He won the 3 sets in the dying moments of the game after clinching the opening set and then going on to win the final set by a narrow margin. He won the match 21-13, 12-21 and 22-20 to book his spot against Kunlavut Vitidsarn in the FINAL.

The game was evenly poised in the third set but Sen took the game from 16-19 to produce one of the scintillating comebacks. He finally broke the jinx in his 5th attempt against the Danish opponent Saturday. The victory also ends India’s losing streak against Axelsen (6).

Earlier, in an all-Indian Quarter-final at the German Open 2022, India Open champion Lakshya Sen defeated his counterpart HS Prannoy 21-15, 21-16 to advance to the semi-finals.